The Cradle of Life - New Scientist is at the vents again...

The Cradle of Life?
(Comments on the recent New Scientist article)

1. “Necessity is the Mother of Invention”, but you also need the Funding!
An article entitled The Cradle of Life in New Scientist (2730) is an interesting contribution to this discussion, but in a rather surprising way. Throughout the piece the author, Nick Lane, of University College, London brings forward the works of Peter Mitchell, along with those of Mike Russell, of NASA, to explain the Origin of Life! But, he repeatedly uses the verb “to evolve”, which is a surprising choice for the transition from inanimate Matter to Living Things, and you might think that these contributors are finally moving towards an Emergentist position.But, that turns out NOT to be the case! The use of “evolve” is well within the generally agreed use because the contributions detailed in the article do not actually address the Origin of Life. The title The Cradle of Life gives it away, because what is presented here are the earliest developments inLife after its Origin. Surely, a site for the actual Origin would be called something like the “Crucible of Life”. A Cradle is aprotective environment for a Life already born!

Now, I have been arguing for many years against that School of explanation on the Origin of Life, which looks solely to pre-existing processes within the preceding non-Life Level, and I argue against their whole approach and “revealed causes”, because they do NOT explain the actual Origin at all. Even the contributions of Miller and Oparin were NOT the causes of the Origin but merely pre-requisites for when the real and appropriate causes did finally appear.

Here we encounter a similar approach, but this time working downwards from within the Life Level, and burrowing as deep as possible towards the actual Event of Life’s Emergence. But, in both these approaches there is a basic assumption which prevents them ever unearthing the actual causes.They assume the usual banker of Reductionism - that continuous links which connect each and every phenomenon with its causes, are appropriate right through this revolutionary transition also...

The Time Has Come To Bury The Dead

Friends, colleagues, scientists, listen to me!
The scene all around us is littered with the dead and dying and the war is finally won.In order to proceed we must, clear this present carnage, and in an orderly and respectful way,bury the dead, and proceed to construct a New Order.But first, we must identify each and every lifeless corpse, certify their demise, and with dignityconsign them ALL to the ready earth.There are those, still standing, who would deeply mourn the passing of these heroes, and theyare honourable men, but I must be true to myself and boldly declare that I do not truly mourntheir passing. Nonetheless, I am here without hindrance from their still powerful supporters, tojustify the evident slaughter, so it is clear that they are all honourable men.So, let us begin. Let us start with the leader of all these men, both dead and still alive, theindomitable Rock against Change; the veritable Cause of the recent war.Yet, we must be charitable, as his friends are now clearly charitable in allowing me to speak toyou now - for they are truly honourable men.Here lies Plurality, for that was his true name, who in spite of his many grievous wounds (someinflicted over 2,500 years ago by the mighty Zeno), did stand and fight until now, when he hasfinally and irretrievably halted by death. Let us intern him, and all his colleagues with duehonour, by clearly crediting him with what he gave us, that you all, I am sure, could recount,and cover him up FOREVER!
Plurality stated clearly, and it was agreed by all to be the certain truth, that every Whole is made up ofseparate Parts, and indeed this profound premise DID open the door to a simplification of the World in orderto study it. Now, Pluralism has at least one hidden partner. If we are to isolate the Part from the Whole andignore all connections, links and even causes EXTERNAL to the Part, we are similarly easily pressed into also ignoring all trivial and clearly negligible relations, which STILL pertain after isolation. Indeed, howcould we determine from where cometh any tiny variations still evident, after we have established our Partdefiningconditions? We can’t do it!So we say that maybe the isolation is not absolutely perfect, and therefore, following our principle of deepstudy of ONLY the dominant relations of the Part, we exclude what else we can, and also ignore what wedon’t seem able to eliminate entirely. Whether these tiny variations are small still-existing links with the restof the Whole, or trivial-but-contained relationships WITHIN the Part, we dump them any way.So, this partner of Pluralism can be called Simplification – the dumping of the inconsequential!
Read More
Posted by E Journal at 14:41 No comments: 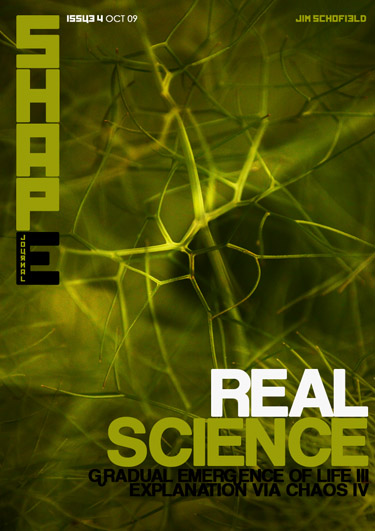 Read it here on SHAPE
Posted by E Journal at 14:30 No comments: