What is left of "Marxism"?

What has happened to Revolutionary Marxism & Marxist Philosophy?

I am finally a real Marxist!

Yet, it has taken me a very long time. And, I got there by a very unusual route...

I had been interested, from the first contact with it as a University student, and slowly built up an extensive library of Marxist works, ever since my first involvement, and have since spent my whole adult life in professedly Marxist-committed parties, or at the very least as an active and trenchant supporter - but I didn't get either educated, or even trained, in any one of those organisations.

I come from a working class family, resident in a major industrial city - Manchester, in the North of England, in which my dad was an unskilled labourer, and my mam a sewing-machinist: but, somehow, I got an education, and ended up as a physicist and teacher.

I did, briefly, make a real difference, politically, when still a very young man, as I worked almost exclusively among working class youth, on the same kind of Council House Estates, on which I had lived and grown up, but, very soon I was outnumbered-and-outargued in the parties to which I belonged, by middle class "intellectuals".

From being a leader I was soon relegated to being the always-available working class activist, to send in, where the middle class certainly could not productively venture, and indeed, feared to tread!

And, my commitment to becoming a Marxist, though undiminished, never found any teachers either willing, or even able, to take me forward - and, I don't just mean in my chosen discipline - Physics. Indeed, though I met fairly able Marxist Economists, I never met a single Marxist Philosopher, any Marxist Mathematicians, or Marxist Scientists whatsoever.

Now, I had first got into revolutionary politics for a very unusual reason. I had been totally disgusted in my very first term at University, when presented with the Copenhagenist drivel (that was then, and still is, the current-received-wisdom) being dispensed by my professors and lecturers. My puzzled questions only elicited ridicule, both from both my tutors, and even my fellow students. But I was, certainly in the right place, and made lifelong friends - one of whom recommended me to read Lenin's Materialism and Empirio Criticism. (He was, by the way, a fellow student, studying, of all things, English Literature). 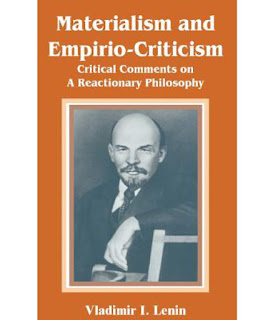 And on reading this, my first Marxist book, I immediately realised that Lenin had the answer to the decline in Physics. His chosen opponents in the book were the famous physicists Henri Poincaré and Ernst Mach, who were the immediate theoretical predecessors of the Copenhagenists who later came to totally dominate Physics.

So, I began to read Marx, and then Engels, but I clearly needed help.

The politics was easy to understand coming from my background, but the philosophy, most certainly was not! Indeed, it was clear that Marx was preoccupied with using the newly established Dialectical Materialism in tackling Capitalist Economics, and it was left to his colleague Engels, to "describe" that stance's detailed Nature and Methodology. And, though he did a great job upon materialist Holism, he was by no means, the dialectician that Marx certainly was. Indeed, Engels "found" Dialectics everywhere in Nature, but NOT as its driving fornce, but rather as a kind of set of properties.

Nevertheless, pamphlets like "The Part Played by Labour in the Transition from Ape to Man", were indeed brilliant.

I discussed Lenin's book with my colleagues, in my then Party, but they were absolutely no help, and they even began to get annoyed. "Pack in this Physics stuff! It's an excuse - a diversion from the real work!"

But, they were wrong.

I had no trouble relating to working class youth: after all, I was one of them! In fact, I was pretty successful working with such people. Any new target area that was decided upon, in my branch, would always involve sending me into the fray.

Clearly, my concerns with Physics Theory could play no role there, it never got addressed - ever!

So, my working life as a Mathematics and Science teacher, was separated from my work in political activities, to the real detriment of both.

I began to make real gains as a teacher, and had a successful career, which took me from a Middle school, teaching 11 year olds, by stages and changes of job and disciplines, until I finally got a series of posts in Universities. The separation was remarkable, as when working in Glasgow, I would spend my daytime assisting post-graduate researchers, by writing tailor-made computer programs to aid in their researches: while in the evenings, I'd be teaching unemployed working class youth Computing in a converted warehouse.

But, crucially, it was in my professional daytime work that I, all by myself, made significant progress, philosophically, when designing multimedia aids along with a dance expert colleague, to crack an important problem in using film and video footage in the teaching of Dance Performance and Choreography.

The old Paradoxes of Zeno, in addressing Movement, were finally integrated via Hegel's Dialectics, and, I began to put together my interpretation of what Marx had been implictly using, throughout, in creating Das Kapital.

And, my original problem with the ill-famed Copenhagen Interpretation of Quantum Theory, could now, potentionally at least, be tackled and resolved!

I returned to Hegel - to review his vital criticisms of Formal Logic, his identification of Dichotomous Pairs of contradictory concepts - occurring frequently at non-transcendable rational impasses, and his recourse to holist, "dialectical" means to correct mistaken premises and begin to establish his Dialectical Logic.

And, as an "aspirant-and-intended" Marxist, AND a competent physicist, I began to tackle the key 20th century developments in Physics, which had led to Copenhagen. The first requirement was obvious: it had to be the addressing of the crucially important Double Slit Experiments. Using the very methods I had unearthed in cracking Movement Studies, I addressed the assumed premises of the Double Slit Experiments, and realised, not so much a flaw, as a crucial omission.

The inclusion of some kind of Universal Substrate, theoretically, at least, resolved every-single-one of the anomalies of these Experiments.


The Wave/Particle Duality resolved-itself into a classic Dichotomous Pair, and was explained away by a dialectical, recursive relationship between moving particles and an affect-able and affecting Substrate.

Initially, of course, it was, indeed, a purely theoretical solution!

But, the same approach led to further theoretical successes, in defining the concrete nature of such a substrate, endowing it, not only with the necessary properties to deliver all required functionalities: but also explaining its undetectability.

NOTE: Also full experimental credit must be given to the French physicist, Yves Couder, whose "Walker" Expedriments - using only a silicone-oil-substrate and energy, enabled him to create his Walker entities, and even show how they could be made to move in "quantized orbits" - far from the confines of Sub Atomic Copenhagenism.

After decades incorrectly claiming to be a Marxist, I had finally made the grade. But, notice, in that important process, I didn't even mention political activities. What I had achieved was purely philosophical! Marxism is after all a Philosophy.

So, instead of deciding political activities by means of precedent, which is what all the professed Marxists I knew did, the practising Marxist, as I now appeared to be, was able to use Marx's methods, and NOT only his past experiences and solutions, to analyse situations afresh, as they are now, and also in every possible field.

To be a Marxist, you have to be a practising Marxist Philosopher! 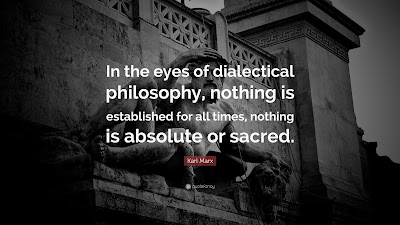 Understanding, and then using, Marx's Philosophy was absolutely vital. Without it, you had to depend upon the past experiences of others: and that just isn't good enough. Having made these conclusions I returned to accessing all the usual supposed sources of Marxist analysis currently available, and their uniform lack of a Full Dialectical Materialist Method was immediately evident.

The supposed "Use of Dialectics" boiled down to the usual tenets of Thesis-Antithesis-Synthesis, Extremes Meet, and the Driving of Change by the interaction of opposites - employed by the activists, OR, the "Back-to-Hegel Dialectics" of theorists like Žižek.

The inadequacies, of them all, have been tragically exposed by events like the Brexit result in the UK Referendum and the Trump victory in the US Presidential Election.

"A plague on both their houses", is not Marxism.

When the Left fails utterly, Populism tragically triumphs! We need the philosophy of dialectical materialism now more than ever.

So, the answer to the question posed in this article's title:- "What is left of "Marxism?" has to be Marxism! And the time to start using it is now...
Posted by E Journal at 11:56 No comments:


This issue presents a collection of papers on Slavoj Žižek’s The Limits of Hegel from his book Less Than Nothing.

The introductory papers are important here, because without them the different stances of both Žižek and this critic would not be understood.

Jim Schofield, the author, feels that the various philosophic stances of both Holism and Plurality, and Hegelian Dialectics versus Marx’s Dialectical Materialism, would simply be confused by Žižek’s Limits of Hegel piece, either taken alone, or with a comprehensive criticism by Schofield.

The deterioration of Marxism has proceeded long- and-variously over the last century, to have left literally no-one with the wherewithal to “do a Marx” upon this “professed” Marxist, who casts a long Hegelian shadow over Dialectical Materialism.

A reasonable amount of ground must be attempted to be established, and a “quote-all-with-commentary” method of dealing with Žižek’s offering, along with three preparatory papers, constitute his attempt to deliver as much as possible.

“Why”, you may justifiably ask, “is this amount of effort necessary?”

It is because the World Working Class are entering the most dangerous period in almost a century, and are doing so without the real Marxist leadership it needs. 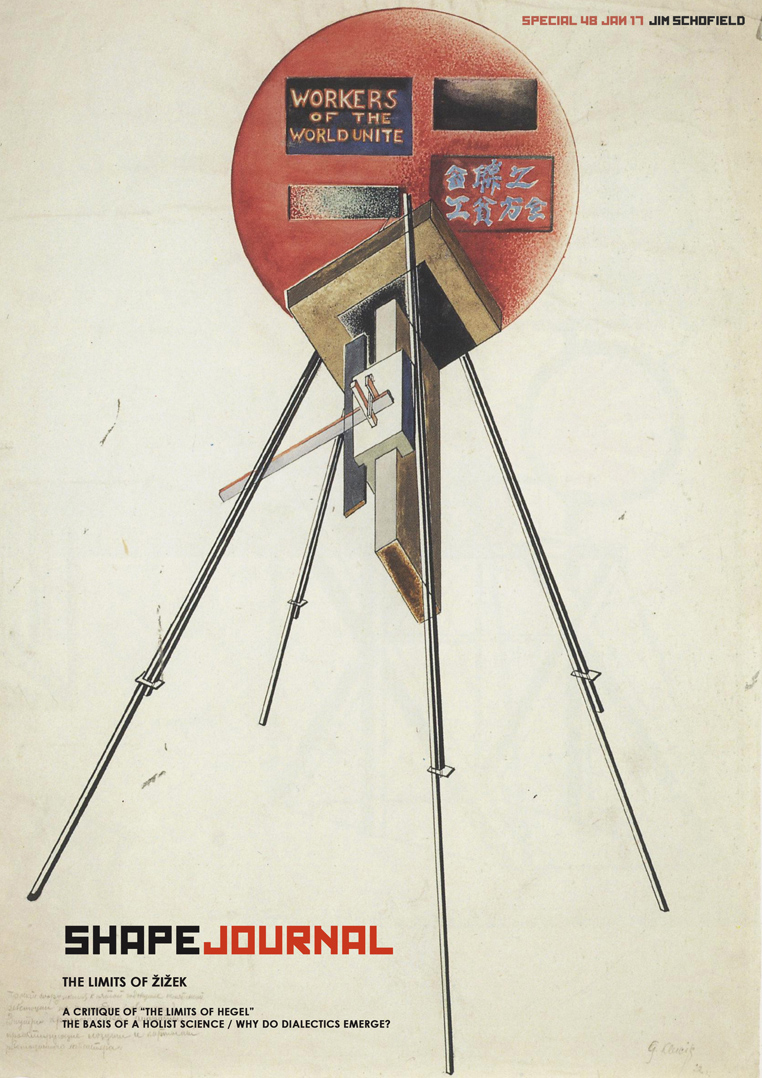 As we move into the 10th miserable year of this global slump, we must reject the suffering imposed upon ordinary working people, and the LIES of those who caused it, those who now expect US to pay for their greed, while they continue to extend the gap between their increasing Wealth and our ever-growing Poverty.

We didn't spend centuries fighting for and winning adequate Social Provision across the State for all the services that it should provide for its People, only to see them now vastly reduced, and even successively dismantled into yet another Privatisation  while the perpetrators, themselves, talk out of the other side of their lying mouths about concern and increased provision plans.

Don't believe a single word!
THEY LIE!
They always DO!

Surely the time is long overdue to terminate their greedy rule!
We CAN do better than Capitalism!
We want Socialism, and we need it NOW!

Out with the Tories for ever!
Stuff the Populists who pretend to be on our side
while continuing to amass their own wealth

They are liars too!
and even further to the Right than the Tories!
How do you think Hitler and Mussolini started?