Posted by E Journal at 10:51 No comments: Links to this post 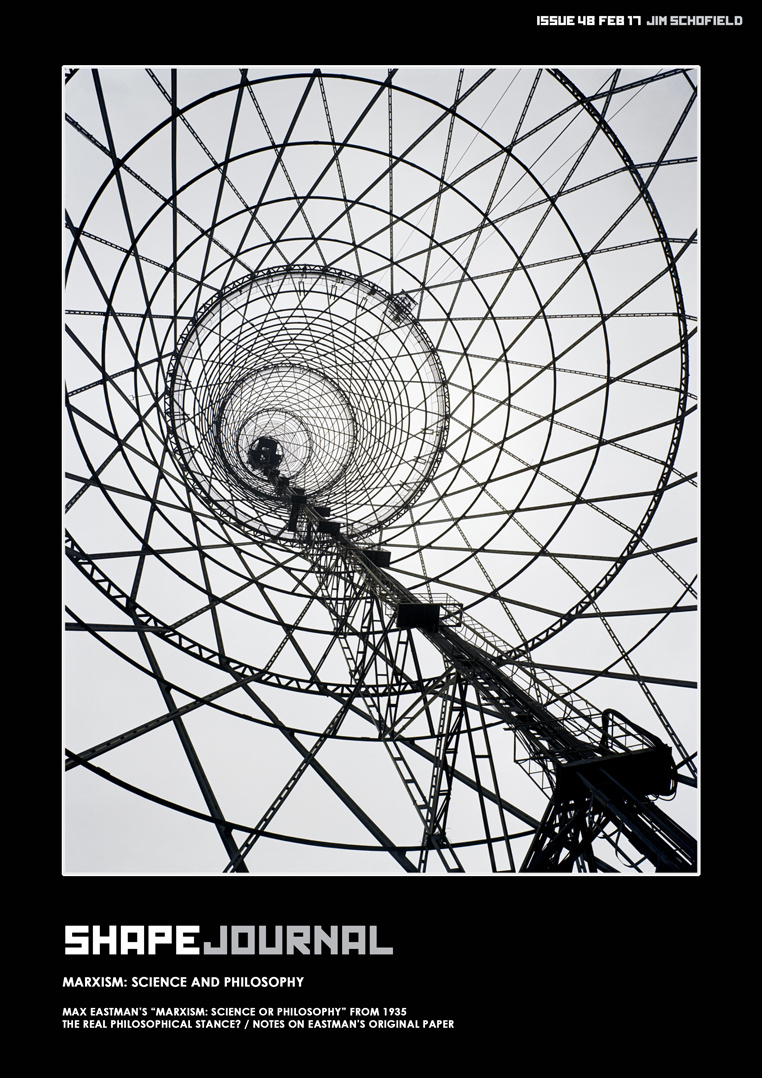 This new edition closely examines and evaluates an essay by Max Eastman from 1935 entitled Marxism: Science or Philosophy? Originally published in New International the work is now public domain, and has been reproduced here alongside two critical essays by Marxist philosopher Jim Schofield.

Eastman's piece attempts to undermine Marxism from a purportedly materialist standpoint, using Hegel's idealism against Marx. He wrote it at a crucial point in his own trajectory abandoning the socialist views of his youth for free market advocacy and eventually conservative ideology - Eastman's anti-communist writing in the 1950s played a formative role in the policies of McCarthyism.

There is still a role to play here for Eastman's writing, however, in the debate regarding the role of Philosophy in Science - the argument about where idealism ends and materialism begins, how science alone cannot answer all our questions.

While Eastman may have had an argument regarding the “forcible imposition” of Marxist Philosophy by Stalinist bureaucrats, he made the same mistake as them, in fundamentally missing the point of Dialectical Materialism, and its revolutionary potential not only for society, but in the sciences as well.

Posted by E Journal at 17:22 No comments: Links to this post

The Limits of Abstraction

How Does Abstraction Fit Into A Dialectical World?

Some years ago, after extensive research, I produced the above diagram entitled The Processes and Productions of Abstraction.

It requires a close look at the accompanying papers on both SHAPE Blog and SHAPE Journal to be able to correctly extract what the diagram delivers, but it did then lead to some major advances in the many possible worlds in which such different productions could actually exist.

The formal areas on the diagram are:-

MAN - the active element, in the middle

REALITY - as the all-containing Ground

An important, and surprising, part of that latter "mental area" of CONCEPTS was termed Ideality - because it by-passed Reality crucially in the various Processes involved in its Productions.

Indeed, it was this Ideality - a rich conceptual World, that was the repository for Mathematics, and enabled a significant advance yo be made in the Philosophy of Mathematics by this theorist.

But, it was only a first step, for it then, more generally, and only briefly, involved just a few, and by no means enough, recursive loops, back to earlier productions, and, thereafter, consequent processes, with necessary corrections.

But, clearly, even more radical, and even transformative changes turned out to be absolitely essential too!

It was not yet, by any means, about Dialectical Logic and the essential Dialectical Materialist philosophical standpoint.

For, NO Abstraction can possibly ever be Absolutely Correct!

The actual process involved, in arriving at an Abstraction, though it is the result of a valid realisation of some measure of occurring Objective Content - some individual aspects or parts of the Truth, will still never be comprehensive. Only for a time, will it be possible to handle a given Abstraction, as if it were "The Whole Truth". For, its validating context will always be limited.

Indeed, we have already-fairly-quickly become aware that unless we remained within the exact-same context, or even rigorously worked to maintain it, our Abstraction would always, ultimately, begin to Fail.

And, remarkably, when t does, the relevant Abstraction, or even "Law", could actually turn into its exact-opposite. We could even arrive at a point where Two-Diametrically-Opposite-Abstractions, would both be, apparently, equally-valid, but on then trying each alternative in-turn, only one would lead onwards in our reasoning.

What Zeno of Elea had discovered, 2,500 years ago, was concerned with the abstractions Continuity and Descreteness - for, when applied to Movement, it was not an odd-and-rare occurrence at all, but a very general and unavoidable feature of all Abstractions - reflecting both the Holist (constant-change) Nature of Reality and the natural trajectory of such changes.

The Formal Reasoning assumption that Absolute Truth could be built out of sufficient eternal elements, be they Abstractions ort Laws, was clearly incorrect!

And, therefore, what finally buried Formal Logic and its Reasoning, which always prohibited contradiction, as a sure proof of failure, either due to incorrect Reasoning or erroneous oncepts, was, instead, slowly being realised to be the natural dynamic of intrinsic change and development!

Of course, the emergence of the exact-opposite to a conception takes a great deal of swallowing: why couldn't qualitative changes just lead to something else?

Now, if the very centre of your mental world is Formal Logic, the required explanation will just never be found! To discover it, you have to study concrete Reality, not only as it exists today, at this moment - but, also, via the History of its development, wherever it leaves sequential evidence!

Instead of attempting to derive higher levels of existence from mechanistic complication of lower levels, you must, instead, study the higher levels to throw light upon the lower ones - twhere the evidence is always unavailable!

The real revealers of Reality are only available by studying Geology, Life, Man and Consciousness - for there the tempo can be made visible and analysed. 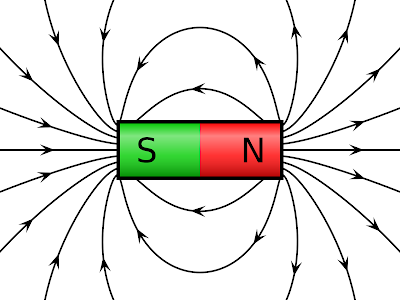 The Natural Emergence of Opposites

The emergence of opposites in reality, mentioned above, really does require further elaboration. Perhaps surprisingly, the ideas which ultimately led to the following Theory, came originally from Charles Darwin's Origin of Species, via his Theory of Natural Selection.

For, in the attempt of this theorist to tackle the Origin of Life on Earth, Darwin's Theory could not be used, because it only involved contention between populations of living species, competing to survive. Clearly then, though such could be used after the Origin of Life, it certainly could not in the conversion of non-living processes into the very first Living Things.

So, the arena for that Origin, and the natural processes occurring there, would have to be considered, as somehow, having a similar effect to those involved in consequent Evolution, but with none of the necessary competition-and-reproduction that dominated Darwin's Natural Selection.

Clearly, only various physical and chemical circumstances-and-processes would have to be happening.

I'm afraid the old random chance occurrences, allowing significant changing of the game, is just too unlikely to be seriously contemplated, no matter how long you give it to act. So, upon careful analysis, it is clearly totally impossible!

The most important features would have to involve easy moving of involved substances, varying conditions and multiple, available substances.

Clearly, the most obvious transportations, would occur if everything was happening in a liquid (water), which due to other external physical forces was constantly "on-the -move" and, consequently, also "on-the-mix".

Many such environments have been suggested, but only one stands out as ideal.

It is the occurrence of shallow and connected, tidal pools, on the edge of a globally-connected ocean of water, situated on a spinning planet, with an inclined axis, and a nearby, warming star, whose rays would frequently get-to-and-affect our described environment,

A reasonably-complex Atmosphere would also be essential, so the diurnal changes in illumination by the star, due to the spin, and the seasonal changes, due to the inclined axis, would not only cause varying Weather, but also both vigorous flows and strong interactions between that Weather and the global ocean.

The Nature of that Atmosphere should also be regularly added-to by ongoing volcanism and eruptions.

All of these situations would enable varying conditions, that also regularly recurred, all of which would be conducive at different temperatures, to many different chemical reactions being possible.

So, with the right conditions in place, what would unavoidably happen?

Various reactions would take place: though different in varying local conditions, and an active sea would move these around - not only locally, but also globally. Some would dissociate again, if the conditions became too extreme, but with the full picture as described above, there will always be places where certain things could and would survive, even if they were not happening everywhere. 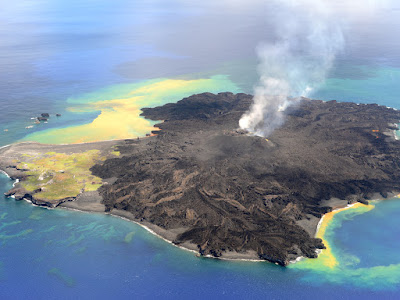 We can conceive of a mix of different reactions taking place both incessantly and simultaneously, with facilitating energy perhaps from the nearby Star, or heated water from the vicinity of volcanism.

The big question is, "What would happen next?"

The usual assumption is that in time all possible situations will occur, and in many one-chance-occurrences, these will lead to more complex entities being produced, though still entirely non-living!

Taking the very same reasoning further, and over colossal time periods, enough totally chance occurrences, will very slowly take the complication to the very threshold of, and then into, the existence of the very first life. What utter rubbish!

You can see that the theorists involved in such theories are of the classical, pluralist, formalist type. But, that would never, ever do it! It is a mechanist, almost Laplacian narrative.
But, the Origin of Life was an actual, and totally game-changing, Revolution: an Emergence of the first water. A change, that once it occurred, took hold and completely out-competed all non-living processes from the outset.

With absolutely NO living competitors as yet, it would rapidly dominate every reachable conducive area across major parts of the Globe.

Now, compare this with the frequently suggested sequence of very unlikely, random occurrences, that fail in their millions before one manages to survive - faced then with another long stagnation, before another freak occurrence moves another small step towards Life.

The alternative presented here conceives of an entity being created that has absolutely NO living competitors yet possible, and something on-the-way-to-life, just competing with non living chemical processes, solely, on the basis of competing for the same resources. Indeed, what will have happened in the preceding period with only non-living processes happening, is that certain processes requiring, and finding, their required resource in abundance, usually churns on for literally millennia, producing enough products to lay down a layer of sediment thick enough to form rocks, still around billions of years later.

It seems very likely that the first "near-life" occurrence will also dominate in a similar way to the non-living example suggested above.
Of course, for this to happen, there is, still, a Revolution to describe!

It is, as been proved many times, totally impossible using the usual mechanistic, pluralist assumptions. So, as suggested earlier, we must look for evidence of actually-occurring Revolutions, in much later developments, long after the First Emergence of Life, to extract a working conception of how such a radical, totally transforming Change occurs, to see if it can throw light upon the most Revolutionary Event of all - The Emergence of Life on Earth.

It has been done several times, in various different ways. First, Karl Marx applied the newly discovered Dialectical approach to History, and discovered a whole series of such Revolutions in the Social Organisation of Human Societies.

Second, Lenin used it as a general method to guide the Bolsheviks within the Russian Revolution to seriously affect the outcome.

Third, Schofield went on to generalise Darwin's Natural Selection to non-living competition between chemical processes, in the period immediately prior to the Origin of Life.

Fourth, he then went on to formulate his Theory of Emergences, which traced the trajectory of an Emergent Event from a prior Stability, via a major Crisis to a Cataclysmic Collapse, swooping to what appeared to be Total Chaos, but then naturally-and-inevitably then delivering a self-constructed ascent to a wholly New Stability, at a different Level entirely.

Though much has still to be done, it is already underway.
Posted by E Journal at 14:56 No comments: Links to this post

Posted by E Journal at 11:23 No comments: Links to this post