Where are the Marxists?? 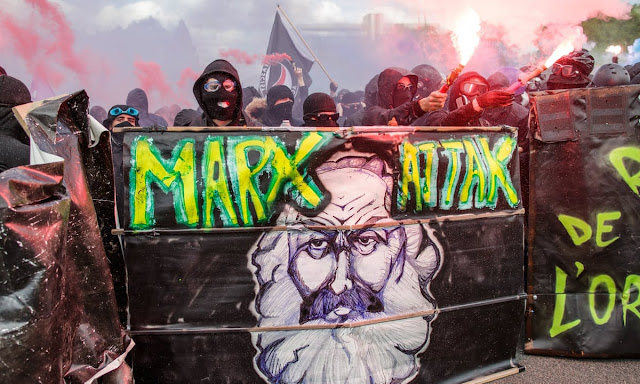 And why we need interdisciplinary Marxist Theory NOW
In this profound period of mounting crises, the self-professed Pro-Working-Class" Marxists, can, it appears, no longer see the woods for the trees!

The very long trajectory of Working Class Politics - from the remarkable Revelations of Karl Marx - to the disappointing political situation we find ourselves in today - has apparently arrived at what seems to be a General Terminal Denouement, with the Climate Crisis and the Ever-Mounting War in Ukraine!

The Soviet Union has long since fallen and China, while purportedly still a Communist State, quietly and undemonstratively chases trade with a still Capitalist Rest-of-the-World, as the Sole Policy for its People. The Socialist Perspective seems to have no place to go!

The World has changed radically to become more like the situation in 1939, when a Nazi-ruled Germany invaded Poland. A new World War is increasingly highly possible now, just as occurred then, but though at that time Britain still had a powerful World Empire, and the Prior Economic Crisis Worldwide was finally fading in a seemingly general recovery.

But NOW there is a Gigantic World Economic Crisis brewing, while both the West, as well as the Hawks in Russia, are itching for a New World War, to supposedly solve the Economic and Political Problems facing the Capitalist Class, along with "The Fruits of Victory", BUT WITHOUT the necessary wherewithal to sustain it, especially as such a Conflict will inevitably vastly speed-up a truly enormous Multi-Sided Cataclysm - not only Economically, but unavoidably also coupled with the mounting Climate Catastrophe too.

And the powers-that-be are already well aware of that eventuality, but because of it, they undoubtedly need to vastly consolidate their Positions and Strength, and to do it while the Working Class still have absolutely NO effective Trades Unions, and NO Revolutionary Parties to lead them in precipitating the necessary Revolution!

For the inevitably coming Crises will certainly change the state of play dramatically! And the Automation that has seemingly replaced the Work Force in much Production, will not mend itself when their minders and fixers are flocking into the Newly Growing Unions, and the rejuvenation of True Marxist Revolutionary Parties of the Working Class begin to grow like Topsy!

The current "seemingly insane" drives of the Ruling Classes demonstrate their obvious realisation of what is increasingly inevitable, and if unprepared-for, could result in their Demise! A Victorious and well-equipped professional Army would be necessary to defeat a rampant Working Class - as the Nazis proved in Germany, after World War One.

The Restricted War, which Putin is waging, doesn't suit the opposing Countries, and today there is evidence that powerful interests in Russia itself feel the same: Remember their Working Class lived in a Socialist country for 74 years before the Victory of the Capitalist Oligarchs. They too will flood-into Working Class Parties when they are necessarily strongly repressed from above!
And who might then be waiting in the wings - China!

(and why is China currently having to deal with a new virulent form of COVID after they dealt so effectively with it when it first emerged? Can you guess how it arrived?)

Now, you would think that there are enough regular commentators around, who call themseves "Marxists" to work on some sort of strategy - but there are in fact literally none who explain things the way I have done here, and what is more, they hardly mention the increasingly important and rapidly changing Contexts, for what is clearly developing totally unhindered!

Yet it had always been the strength of Real Committed Marxists that they also always situate developments in the Delivering Contexts, as they in the end, often, deliver the more unusual consequences! And, the reason for this, is that in them, and even their evident absences within most others:  they have a particular set of preferred outcomes which they strongly signal, while ignoring those that they would rather didn't happen!

Now Richard Wolff is a celebrated "Marxist", but I could find No Trace of a pro Working Class Stance in his comments upon the War in The Ukraine. And a Prior analysis of the way things were developing in the Context involved, should have been what he established FIRST!

As has become increasingly clear, Thinkers upon these matters are always too Single-Discipline based to arrive at a Real Marxist Analysis. They find the same things Marx discovered in History, BUT only within their own Specialist Areas! 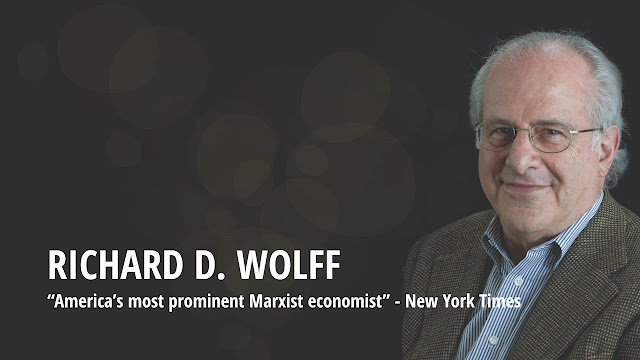 And that is never enough!

To cope with the problems of today, both the actual pertetrators AND those seeking Objective Solutions, DID it with their Subject-Blinkers on! And, because of the unavoidable biases involved in both approaches, the problems were NEVER solved, either by the Capitalists in charge, or adequately addressed by the Discipline-limited "professed Marxists"!

For, the cricial limitations of ALL Restricted Approaches, is that by so doing, only a cut-down version of the presently-existing-situation, which occupies ONLY a Single Level within Reality-as-is, will actually deliver a finite solution, BUT always limited to that Precise Context alone.

This relation within a Limited Context and its associated useable Rationalities, is, of course, the root if the Problem - and gives the illusion of" Absolute Truth!" But it certainly isn't so! And we must say Why!

The reason is that these Restricted Situations were in the earlier Evolution of Reality-as-is Absolutely Correct: BUT then ceased to be so as New and Different Levels emerged that changed things fundamentally. Yet these were add-ons at Different New Levels, so the old version could even then be taken as an Approximation to the Modified Current Truth.

Needless to say, this always confused early Thinkers, when it was finally updated, and they didn't for a long time realise the Division of Absolute Truth over Several Levels! They didn't even see the Levels, but instead interpreted them as Different Disciplines!

Clearly, the whole range of commentators of the current increasingly critical situation, are, whether supporters of the Status quo, OR perhaps surprisingly, even any avowed "Marxist" Critics - they are all, nevertheless still very far from capable of fulfilling their various, intended, and supposedly-opposite objectives - as both of these opposing groups never really address the problems caused in any way that could lead to a sound resolution.

The once reliable trust that could be put in the Marxian Socialists, is, I'm afraid, more or less dissipated by their current inability to both explain and then direct arrived-at solutions, to what will undoubtedly be inflicted upon us, in the coming period!

And, the reasons for the failures of both intensions of the perpetrators, and the inflicted-upon recipients of what has been delivered, wrongly characterise what was actually involved, and where it would lead! The Perpetrators know only what they can do, and that isn't enough to accurately know what effects it will have! While the recipients using extracted Laws taken from wrongly conceptually considered remedial actions, which, therefore, don't get the expected effects right either!

Both sides use Laws extracted in only partly defined ways, for the recipients, and based upon a very different prior experience, by the perpetrators. For in both sets if actions, Wholly New Emergences, when they will happen for the very first time, are absolutely NEVER predictable: so, what will happen is unknowable!

And, because of a multiplicity of these events, there will be NOT a single outcome, but a range of possible outcomes with different probabilities of each happening!

Now, where have we seen this before? Is it not in Quantum Theory?

And, at this stage of the Mess wrought by a rampant, blinkered Capitalism, the Significant Damages to the Environment, and its resiliance-to-recover from such things, has, by now, gone TOO FAR, and Significant Climate Change is already knocking at the door, simultaneously with such a destruction of its means to recover, that a Major Calamity appears unavoidable.

For the Working Class to re-arm with the very latest Developments in Understanding such Situations AND, of course, intervene in them, there is still much to be done!!

Indeed, without the Significant Extention of what Marx brilliantly initiated, and Lenin further developed, of the profound theoretical basis - we have no way of Understanding the complex dynamic Systems and multiple levels involved. Yet this vital theory could not be both further, adequately and necessarily developed, without the current conscious extensions of these ideas into All The Sciences that Marx and Lenin had never addressed - and are NOW being so-extended by this theorist!

The lack that these omissions inflicted upon this Important Body of Theory, is clearly indicated by the oft applied appellation of the term "Scientific Socialism" to Marxism, which is most certainly Untrue, as neither Marx or Lenin, nor anyone else, ever criticised the means and methods of Science from the correct Dialectical Materialist base to, for the very first time, establish such Laws from a philosophical standpoint - as a Socialist Science!

For Science - as was, could never be competent as a basis for that Fundamental Philosophical Stance. And even before this New Turn, the old Causal Laws, so achieved, were regularly added to, by supposedly New Purely Empirical Laws - with Absolutely NO Causal Explanations evidently possible for them.

All attempts to discover such interpretations met with Total Failure, and this caused most physicists great difficulties - for they profoundly believed that all such Laws MUST have Causal Explanations. But, the Positivists Henri Poincare and Ernst Mach insisted that these Empirical Laws should be given equal status with the preferred Causal Laws, within their Empirio Criticism Approach. And though this, at the time, was rejected, the following vast increase in these Empirical Laws, in the Sub Atomic Realm, persuaded the majority of physicists to agree: it rapidly became the norm for all Science!
And, it was only recently, that the Emergence of what is termed Systems Theory proved that Causal Explanations were indeed possible, but NOT residing at the very same Level: for as they were associated ONLY with Systems-of-these-Processes, they were situated at the higher Level of Systems modifications!

Indeed, all of the Sciences were shot through with these systems modifications: reductionist Science was NOT the reliable basis that it used to be assumed to be!

Indeed, the Systems modifications turned out to be many and various and torpedoed the long resorted-to assumption that the tiniest causal relations just were the same but multiplied-up in all bulk situations.

AND, most important of all: without the full addressing of ALL the interactions in all bulk situations, the very Natural Stabilities that occur and their Tumultuous Collapses - particularly in Revolutions - will Absolutely Never be understood.

Indeed, even more generally an Important Turn has finally actually been initiated, that had been a very long time in getting to the stage, when Explanatory Theories, across-the-board, could finally deal with their long disabling restrictions, and become more generally applicable!

Marxists must now embrace a holistic Systems approach if they are to deal with any of the problems facing us as a species today.
Posted by E Journal at 14:46