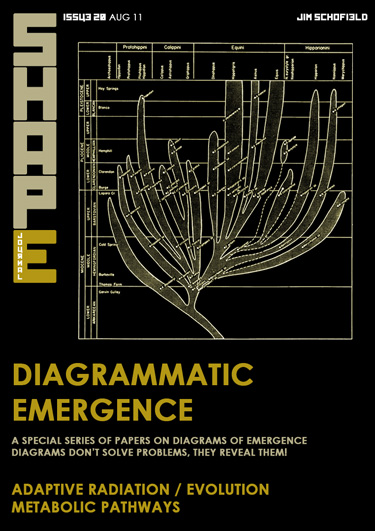 Read it here
This issue of SHAPE Journal contains a closely related series of papers, in which the trajectory of significant qualitative change in an Emergence is tackled,diagrammatically. Of course, the elements of such considerations are still concepts, processes and transformations, but the spatial idioms of diagrams delivers that extra “dimension” of simultaneous portrayal, which does, indeed, allow quite involved transitions to be laid out, considered and significantly improved.
A words-only argument can be as much about winning as revealing, and it is clear to this author that without these kinds of diagrams, we would not only find solving such problems considerably more difficult, but we would also be bereft of the best initial means of communicating the ideas involved too.

The trajectory of Creative Change in an Emergence, such as that of the Origin of Life on Earth, involves contradictions, phase changes, and major transformations – even of the probabilities of events, and it is these features that must be understood. These papers do not complete the job, but they were fundamental in the creation and publication of this author’s Theory of Emergences in 2010.
Posted by E Journal at 16:24 No comments: