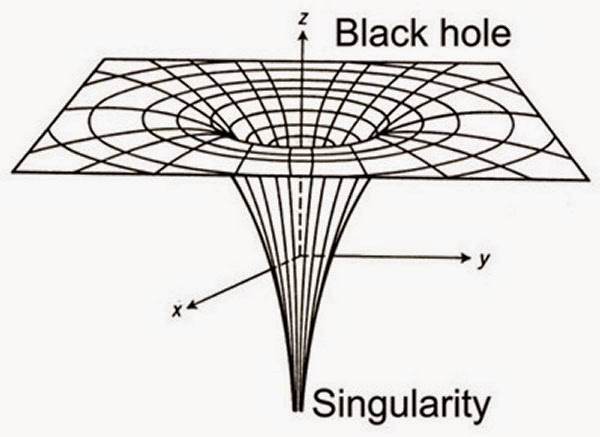 What is a Singularity?

Now, the reasoning is flawless, but it isn’t real! It really does produce an infinite, never-ending process.

This is a Singularity!

It is what we call an “ill-formed algorithm”. And, such are very frequently used because they do, for a time, take us ever closer to our sought-for solution. But, they never end, and we have to include a get-out-clause to terminate the infinite process.

An example in our race algorithm above would be something like –“when the gap between the runners drops below one inch (say) terminate the process immediately” The algorithm is one example of how we simplify and idealise situations in order to solve on-going problems. It has long been our primary method, and still is to this day.

For, such forms can press you ever closer to the solution you seek. By terminating at some finite stage in the cycling process, you can be left with a relatively accurate set of results. Indeed, there are many real world situations which have to be addressed in such ways, as there are no others. For example all weather forecasting programs are entirely of such type. The whole method we call Simulation is similarly full of these kinds of methods and terminators.

But, there is even more to it than even that. Some extracted relations, usually encapsulated into equations termed Natural Laws (because they look eternal), also fail in the same way when extrapolated beyond their required conditions of applicability. Indeed, the whole discipline of Mathematics is full of Sinks and Explosions, where they were given the name – Singularities! Get-out-clauses abound!

Now, it should be crystal clear that to transfer such Singularities into reality is obviously a major error.

They do not exist in Reality.

Even the most famous Singularity of all – The Black Hole must never be taken in the way it seems to be – by the extrapolation of a relation beyond its range of applicability. In all such cases, the old relation reveals its inadequacies, it is no longer even approximately true: it is now just WRONG!

If by any chance you have abandoned physical explanations, and put your entire trust in Formal Equations, you are subsequently in very serious trouble. And, that is the Crisis in Modern Physics: for that is precisely what they have done!

So, how on Earth do they cope? With NO explanatory science to use in such situations they are forced to do TWO things. First, they change the way they use their Formalisms to deal in Probabilities. And, second, they resort to unsubstantiated Speculation to fill the (vast) gaps.

And, the dead ends proliferate all the time. Innumerable significant qualitative changes cannot be handled by their extrapolated formulae, and add to the number of unsolved (and by their methods unsolvable) problems of crucial importance, which are given over to unfounded speculations. Whether it is the Origin of the Universe or any wholly new development in reality. Whether it is the Origin of Life or the End of the Universe. None can be tackled because of this catastrophic retreat!

Don’t you believe me?

What about String Theory, Quantum Loop Gravity, Multiple Universes, Branes and the rest? You may well ask, “Why are they locked into this evidently wrong standpoint and methodology? Can’t they just change over to a sounder basis?"

Believe it or not, the answer is “NO”.

Yet, effective alternatives have been around starting 2,500 years ago (and I am not talking of Ancient Greece). The main alternative to the usual Principle of Plurality (the cornerstone of western thought) was delivered then by The Buddha, in which he based himself upon the alternative Principle of Holism. Yet, in spite of others following that line, including the great German Philosopher Frederick Hegel, everyone else chased the clearly pragmatically effective Principle of Plurality. Hundreds of Years and innumerable disciplines have been constructed and added to via such means, and literally NONE of them will ever consider abandoning it.

There are those who have embarked upon this better way, but the establishment of Holist Science is still in its infancy.