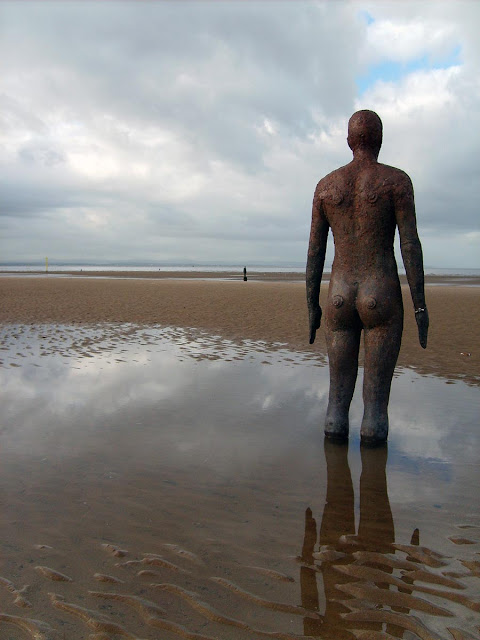 A small, family group, constantly on the move, are struggling to survive as they slowly cross the raw, harsh landscape, only recently released from the iron grip of solid ice. Alone and vulnerable, they are surrounded on all sides by the hostility of the land, and the threat of its predators. But they are aware!

Everyday, glimpses of order momentarily shine through the hostile world, and they grasp for them. These evidently meaningful patterns seem to hold out the promise of understanding and control. And indeed they do! Step by step, small elements of the world are grasped and manipulated by the group to ensure their survival and growth.

The successes are initially modest, but fundamental. The world not only presents constant threats, but also a great deal of promise. Mankind began to mould his environment, at first marginally, and then significantly. There were clear indications that he could be King!


Out of these beginnings, Mankind began the imperceptible ascent to gradually dominate the landscape, and to lead to the unsurpassed expansion of his species across the whole planet. His effective stone tools and weapons were refined over millennia, and his mental and social developments crucially equipped him to survive and prosper. Step-by-step mankind wrested more and more fragments of evident order from nature, though they could initially only be conceived of as almost magical knowledge, and each new morsel was bedecked with elaborate ritual to ensure its continued success, and guarantee its handing down to future generations. Man’s increasing realisation of his own potential grew apace, but was still embedded in the evident reality of his own inadequacies and physical weakness, so the potential was externalised into a conception of a superman as the epitome all possible knowledge and power. Locally this led to the necessary rise of the leader, the chief, but also to something magical & embedded in the detail and wonder of the world itself - to a power beyond you and me – the mind who is responsible for this comprehensible world – the superman who knows all!

So, in parallel with his slow, and sometimes halting, climb to truth, there was also held dear the promise of the generosity and wisdom of the Creator. These necessary elements didn’t always pull in the same direction, and some groupings and clans realised that they could take short cuts in this climb by appropriating the achievements of others by force. Of course, such moves were always excused by the need to increase the glory of their own Gods.

This is, of course, the stuff of history, and the remit of specialists in the field. But, a requirement here is to reveal the motive forces behind certain crucially recurrent patterns in man’s struggle for knowledge and power. What more and more began to be the biggest promise in fragments of nature was the discovery of quantitative relations. From calendars to metallurgy, precise measurements led to recipes which delivered miraculous results. But these did not wrest mankind from its religions. They in fact entrenched them (at least at first). The miracle that is God showed himself in all these things. Indeed, as the investigation of nature became more organised and sophisticated, ever more wondrous and steadfast relations were revealed. What could explain such a wealth of order other than the designing mind of our creator? Now this persistence of man’s view of himself and reality could do no other than show itself even in the most “scientific” of his endeavours, as we shall see.

The Toolbox, the Godhead and the Deep Blue Sea:

The trajectory of coming to grips with a profound aspect of man’s struggle to understand the world is never a smooth arc to truth. And, neither can it be otherwise, because such an area is always full of contradictions, breathtaking potentials and precipitous pitfalls. The famous zigzag prevails (as elsewhere when no direct path can be plotted) first waxing lyrical in a given direction, then “correcting” like mad the consequences of that sudden rush of blood, and inevitable careering too far in the opposite direction.

If the situation were a simple two-sided contradiction, then a resolution could be seen to be possible, at least some time in the future, but if the contending forces are many and various, the battle can seem endless, and perhaps it is!

I am in the midst of an extensive study of Abstraction – not as an academic undertaking, where I present a many-sided, even-handed view, but, on the contrary, I am obsessed with the path to truth. I want to understand the methods that mankind has invented and developed which can take him incessantly along this long and difficult path, and equip him to both interact with Reality (i.e. manipulate reality), and understand it.

It is a tall order, but it is difficult to imagine a more worthwhile undertaking.

Without such a study, most things become pedestrian. “History” contains NO “guiding wisdom!” “Science” contains no real understanding, and “Mathematics” becomes a worship of techniques! And it is with Mathematics I must begin.

I was showing a colleague some of my research into the beautiful features of tessellation families that occur in re-entrant polyhedra, and elicited only the response, “But, what use is it? What can you do with it?”

And I found myself saying that it was not undertaken with use in mind. It was, in fact, Pure Mathematics, and it was an area that obviously needed study. The eyes of my questioner glazed over, and it was clear that my studies were considered to be self-indulgent, and useless! Now as someone who has spent most of my life fighting the dangers of mathematical idealism, that reaction stopped me in my tracks. It was quite evident that I had been pigeon-holed as a typical ivory-tower academic (at least in regard to this work), which I knew to be totally untrue.

So, in the light of my well established position with regard to the philosophical ground of mathematics, why do I do this very abstract research? The elements of my studies in this area certainly don’t lie around in nature. They are in fact entirely absent! They are incapable of occurring by natural processes in the real world. In the form that I am taking the studies, they are a figment of my imagination, so how am I energised in this study? What possible truth am I struggling to reveal, and why?

The reader may think that the stated quandary is nothing new, and that all serious academics come across it everyday and deal with it without much concern. Now I could, at this point trot out the usual high-sounding reasons for such intellectual activities, but I don’t believe that it would get us anywhere. Also such platitudes would be totally ignoring the context of my wide range of studies that have got me to this point, and determine the reasons for all my studies.

For example, I have spent many years fighting the consensus in my own specialist areas – Science and Mathematics. I am an enemy of String Theory and much of what is termed Modern Physics. I condemn the dumping of scientific explanation for mathematical formulae, and the amazing speculations of the heroes of Cosmology. My most unwavering criticisms I marshal against the “mystification” of mathematics that takes it as the very essence of reality – “the mind of God” to use Hawking’s famous quote. Nonetheless, you can find me quietly working with pencil and paper for hours, days and even years at a most abstract area of mathematics – and I know that I am right to do so! Why?

Be Patient! I’m afraid that a direct, brief answer to this question would be inappropriate at this juncture. I must explain Mathematics, and use a broad brush, for mathematics is a diverse area with many different uses and purposes. Let us start with the “Toolbox!”

This is the first in a new series exploring philosophy and mathematics: Man & Reality. Part II will be published here next Monday.
Posted by E Journal at 14:19