Krishnamurti and Science I 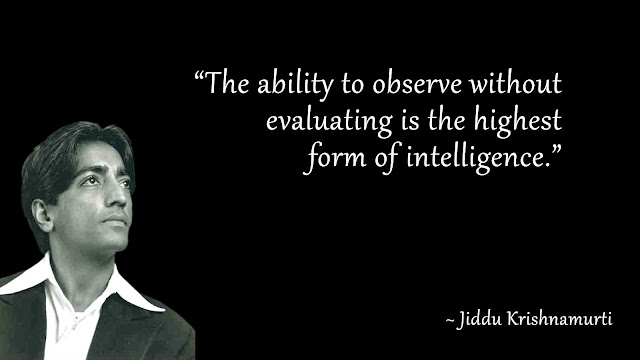 The Indian spiritual philosopher Krishnamurti has had a series of four talks with a small group of eminent scientists available on YouTube for many years, and as I am both a scientist, a philosopher, and a Marxist, while also having been married for over 40 years to a committed Buddhist, who also admires Krishnamurti, it certainly behoves me, long before I consider any sort of critique of the content of these talks, to establish the evident social contexts: for they certainly seem to be crucial, for all the participants.

Krishnamurti's three scientists included a Sub Atomic Physicist, a Biologist and a Psychiatrist - all of international reputation, but for the whole of the first talk, all of them were at something of a loss to see what Krishnamurti was getting at, especially as the Master was seeing them, their professional contexts and intellectual grounds, as well as Mankind in general, as crucially flawed in their attitudes to Existence! But, without committing to any sort of critique, I was able to set some socially clear parameters in place, initially and substantially from my own origins, experience and professional and political career over almost 60 years, contrasted with the very different histories evident in all those present in this debate.

As the offspring of a working class uneducated and untrained couple in industrial Manchester, England, and the only one in my year at Elementary School to pass-my-scholarship, aged 11, and get to Grammar School, I, by the time I reached 18 years old had undergone two very different life experiences. 12 years in the Slums of Manchester - running the mean streets, then a move to a Council House, followed by 7 years away from the friends of my childhood, to spend all my time with clever kids from all over that big city. I coped and indeed succeeded academically (unknown during my sojourn in the prior West Gorton slum). But, it was a different world, and included many from a wide variety of privileged backgrounds, yet brought together in a levelling and testing environment of academic study. But, nevertheless, I warmed to learning so many new things, and became the best at Mathematics and Science in my year throughout my school career.

Unlike the social situations in Krishnamurti's discussion group, I was unavoidably contrasting the preoccupations of my childhood in West Gorton, with what I was learning, and succeeding in, at my Grammar School. And, funnily enough, even that turned out to be very different indeed, to the next phase of my experience at University. For, what I had learned in my Grammar School clashed dramatically with what I came to be taught in Physics at my University. For, if the Class Shock in my first transfer was significant, at University it was devastating! Not, as you might imagine, because of prejudice, but because of the Content which I was being taught!

From the first term I disagreed with my lecturers, some of which were considered world-class - for I had never come across Idealism as the cornerstone of Knowledge-and-Understanding before. But here, it was named "The Copenhagen Interpretation of Quantum Theory", and was replacing the whole position I had been taught at School.

You are never an idealist when you're a working class labourer, or even a working class pupil. It all had to be applicable and it had to make sense - your understanding just had to be enhanced, otherwise it was a silly thing to even entertain. My successes in Grammar School were because I was daily first understanding, and then using what I learnt, more and more! I succeeded not by remembering things, but by truly understanding and applying them. Yet, in the very first lectures at University, what was being taught WAS NOT applicable: Why?

Teachers of Science in my school had to do everything - both explaining and demonstrating, and, crucially, even showing you how to do the same. That certainly wasn't the case in the new context. Theorists described but didn't explain, and "doing" was done by a very different group termed Technicians. Never ask your lecturer to show you "How" - find a technician! The two necessary functions were generally carried out by people from different Classes. All the physics lecturers were from a very different Class to myself. While the Technicians were more like me, and could tell you what you needed to know to get the required results. Sadly though, even they couldn't tell you "Why?"

In Higher Education, and then in the consequent professions, there had been a significant layering of the Sciences - Theory was for the superior class types, while technical implementation was for the workers!

Neither Krishnamurti, nor any of his group of debaters were from my Class: all were, most certainly, all from much more privileged layers of Society, and neither side of the arguments were Doers.

But, nevertheless, there was a Class Collision of a very different kind very clearly evident.

The position that Krishnamurti was struggling to communicate was totally untenable for the scientists he had assembled for this debate. Absolutely no work-imperative was evident in Krishnamurti's objectives, while the scientists were clearly so motivated, but in explaining things in their own scientific contexts.

Occupying himself with questions of existence, as Krishnamurti was doing, was, and always had been, as unavailable to his co-debaters, as they undoubtedly were to labourers in the Working Class. They could never be exclusively concerned with the nature of Existence: for that required a very much more privileged life than they could possibly experience. A life where everything was done for you, either by an extensive team of servants, or perhaps in a later "seeking stage" by a congregation of avid worshipers?

Having established the existential ground of the debaters in this series, an addressing of the content of their debates can now be addressed...

In the meantime you can watch the seminar in question.