Listening today to a Democracy at Work talk on the Internet by Professor Richard Wolff, concerning Trades Unions and Worker Coops, it was crystal clear to me that his direct comparison of the struggles of today with those in the 1930s in the USA, involving the Alliance of the Trades Unions with the Socialist and Communist political parties, was NOT an appropriate comparison, and the new suggested alliance, alone, would never be a sufficient policy now!

We must not forget what the Labour Threat presented to Franklyn D. Rooseveldt was in the 1930s...

"Give us Justice now, or we will carry out a Revolution!"


And, that was no idle threat! And, even then, the Unions alone would never have come up with it. Indeed, it had to come from the political parties, who had also been vital in building those Unions.

This may not be currently popular with today's left, but, the Unions, without such a political leadership, could never dispense with Capitalism. And, like it or not, neither could a movement for Worker Cooperatives! They are too limited in both their purposes and their power, to naturally address what is required to finish and replace Capitalism permanently. 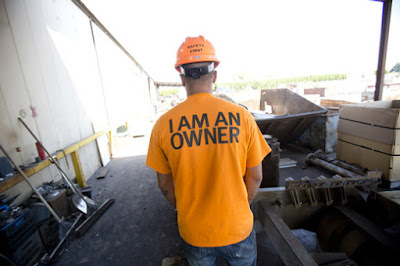 Purely Union v. Capitalist, or even Worker Coop v. Capitalist, struggles alone would always end in victory for the Capitalists! There would have to be society-wide unrest AND active Revolutionary Parties - addressing the necessary questions, to inform, motivate and educate the masses, against the massive tide of misinformation and lies of the media-dominating Capitalist Class, so that, instead, the vast preponderance of the whole People-in-Revolt could smash the status quo, for a Future they could both see and deserve. And, that crucially necessary component is clearly, currently, totally absent!

Indeed, it is also absent within the Unions and the Worker Co-ops, in the form of politically-equipped leaders, who understand the political necessities - not only for Society at Large, but also in formulating the appropriate policies necessary - even those concerned with the restricted objectives of their own organisations.

1. How do Coops relate to each other?

2. How do they relate to the Local Political Democracy - within which they exist?

3. How are leaders and external representatives elected, mandated and removed?

4. How, exactly, are the absolutely-necessary society-wide objectives to be arrived at, and then implemented?

5. What about Social Services, Schools, Hospitals? Universities, infrastructures and nation-wide Transport that all need to be organised and controlled?

I could go on, but clearly, even within these essential organisations, there also has to be an awareness of a much wider political context, not only for removing Capitalism, but also for establishing, running and maintaining a Socialism-for-and-by-the-People!

Political Parties of-and-for the People, with clear objectives, and indeed worked-out policies, beyond Capitalism, are absolutely essential. Clearly, neither the Republican nor the Democratic parties in the USA could ever deliver what is required in this regard: for they are both in-hock up to their greedy necks, via large financial contributions from the Billionaire class.

And, even the tattered remnants of the old socialist and communist parties are too compromised, in successfully ensuring their past survival, for them to ever be capable of mounting a credible and revolutionary assault to win the forces necessary from the mass of the People.

Currently, the absolutely essential revolutionary political force is still wholly absent, and the experiences of Greece, and even the Arab Spring, demonstrate clearly the inevitable outcomes, when such appropriately-equipped organisations are not in place.

Is not Revolution the only solution?
Posted by E Journal at 12:29