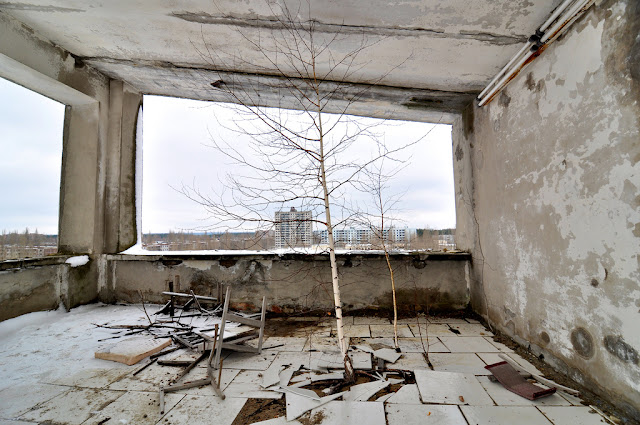 In a recent YouTube video out of California, the Quantum Loop Gravity tendency in Modern Physics claims its own Theory of Emergence, in a slick, but totally uninformative video presented by a pretty girl. As the author of the 2010 The Theory of Emergence, and also a physicist myself, I am of course, bound to comment.

You can watch it here, if you must!

I will not go through the details of that video, for they are both insulting to their overtly intended audience - "the layman", and packed-full of unestablished assumptions - all restricted to a multi-dimensional Mathematics, and "caused" or "selected-from Random Chaos by a Universal Consciousness"(?).

Frankly, this is not worthy of a detailed criticism, but it does use the same rhetorical methods as Trump uses in the political sphere, which indicates the methods to be used to convince the uninformed, without ever actually informing them!

But, its claim to a "theory of emergence" must be torpedoed by someone, such as myself, who has been involved, all his adult life, in revealing the damaging errors both in Formal Reasoning, Politics and even Science, due almost-wholly to the inadequacies of Mathematics in explaining Reality. Indeed, to even limit it, temporally, in that way, reduces its major significance over the last 2,500 years.

Ever since the creation of Mathematics by the Ancient Greeks, its enabling distortions in representing Reality, not only greatly expanded its pragmatic use, but also revealed a means of relating individual "discoveries" into an extendable and consistent intellectual discipline. And, these were very quickly carried over into Reasoning to produce Formal Logic. And later, became similarly built-into the new discipline of Science.

Yet, almost immediately, after the initial gains were achieved, the Greek, Zeno of Elea, had revealed major errors in Reasoning, when addressing Movement, in his work on Paradoxes. And, these were never properly addressed, for over two millennia, until Hegel, the German idealist Philosopher stumbled upon the major flaw - Formal Logic did NOT ever address Qualitative Change!

Indeed, to construct the founding discipline of Mathematics to actually work, all Qualitative Changes were prohibited, and, in addition, all Forms were changed into only perfect versions. Mathematics was never a description of Reality-as-is!

And, in its changed state, it had been made to conform to The Principle of Plurality - where those assumed features were mandatory: they alone, in fact, gave Mathematics its consistency and extendibility! But, in carrying over the properties of Mathematics into defining Formal Logic, they also implanted these same restrictions into it too. And, later the same disabling features were delivered to Science as well, as Formal Logic was the required reasoning tool.

Consequently, Science could only make any progress at all if the situations to be investigated were constrained to only deliver such features. It would only work within Stable Situations.

It was The Science of Stability!

Now, let's be crystal clear: "What is an Emergence?" 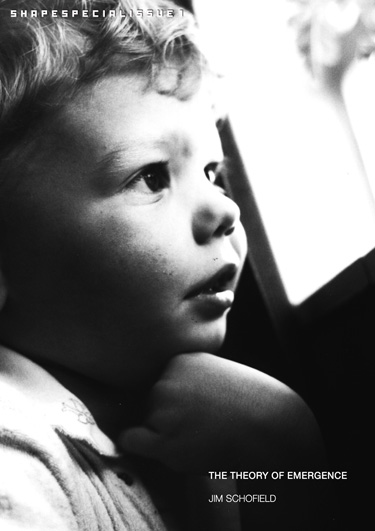 In my book, as the author of The Theory of Emergence, it is when something qualitatively different emerges out of a seemingly persisting stable situation, changing things permanently. But, for all those who depend upon Mathematics as the unifying "consistent" basis of their studies and determinations, such Qualitative Changes are summarily banned! Their pluralist basis (Mathematics) always requires Stable situations: so what must they mean by their claims to deliver Emergences?

Well, in spite of deliberate obfuscation, the designers and deliverers of this video use the oldest trick in the book. They first allow such a mess of complication, that almost any outcome seems to be possible, and they put down what selects from this enormous menu of possibilities, to a "Universal Consciousness" (which they insist is not God), but a product of the overall entire-causing-system, that can then choose the actual outcome.

Now, what is my alternative?

All pluralistic Laws, as dealt with as above, have limits to their applicability. We call them Singularities, and if delivered of the appropriate values of the involved parameters. which take the situation to those terminations, then the equations give meaningless results - like infinity for example.

Clearly, to a Holist, such as myself, the domain of applicability of their strictly-pluralist-equation has been exceeded, so it no longer describes the situation. The boundaries of the required Stability have been exceeded, and the Stability dissociated!

Close to that boundary, in non linear cases, the limited region of Mathematical Chaos, can be encountered, but not for long, for the situation quickly descends into what seems to be Total Chaos..... but, then coalesces into a new relation in a different Stability.

And, "How does that occur?", you will quite rightly ask!

It occurs because in Reality-as-is, there are many simultaneous relations all-acting together, but they DO NOT just sum, as the pluralists insist - but both affect and change one another, some co-operating, while some are opposing.

Indeed, for a time these always changing mutual modifications do deliver something like "chaos" - but only until they form a new self-maintaining system, when seemingly damaging changes in one, are compensated for by consequent opposing changes in another.

Indeed, Hegel's simplification of this was his Interpenetration of Opposites, the simplest examples of which are the Dichotomous Pairs, discovered by Zeno, and explained in terms of mistaken or absent premises, by Hegel. 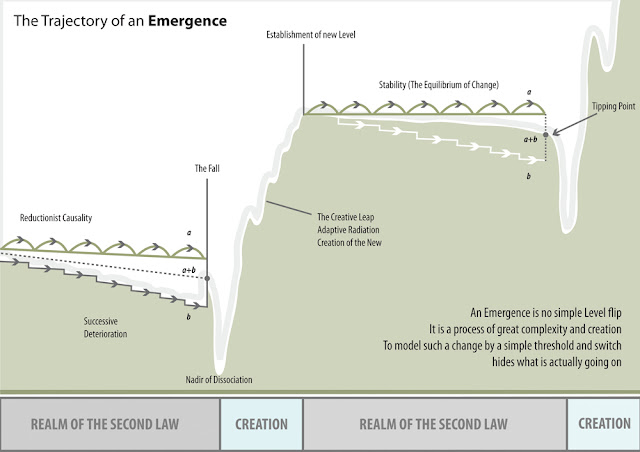 In place of the idealistic and pluralist conception of an Emergence, may I offer The Trajectory of an Emergence, shown above. It is clearly no magical conversion, but a complex transition, involving a dynamic change between two Stabilities.