Halton Arp was a brilliant Astronomer, whose observations increasingly challenged the consensus theories in Cosmology. But, he more or less stood alone, and the bans on his continuing to have access to the world's greatest telescopes, and the difficulty in getting his interpretations of published observations themselves being accepted for publication, has severely constrained the propagation of those conclusions. And, as the means to obtain the best data are now almost totally restricted to multi-million dollar devices such as the Hubble Space Telescope and the Large Hadron Collider, such exclusions are ever easier to institute.

The defence of past positions becomes ever easier, and genuine counter-proposals are easily shut out by peer review, and don't get effectively aired.

Now, neither I, nor anyone else, is in a position to gainsay or agree with Arp, for that would certainly at least involve a directed observational undertaking to prove or disprove his conclusions. But, Arp has found such undertakings impossible to arrange, as have many others! Yet, if only some of Arp's conclusions are true, they would be revolutionary.

Arp made his name with his bestseller - Atlas of Peculiar Galaxies (1966), which led to him noticing a whole series of cases, which seemed to suggest intimate associations between mature galaxies, and what seemed to be "nearby pairs of dwarf galaxies" in which their redshifts in their spectra made nonsense of such an association.  For, they alone placed the pairs of galaxies at a vastly different distances from the observer than the supposed "Parent Galaxy" - but only if the usual cause of red shifting was the correct one, due entirely to the speed of movement away from us.

Arp could suggest an alternative cause, which he termed the Intrinsic Redshift, which was not only due to the age of the dwarf galaxies or quasars, but also varied in a quantized way, with time and distance from their birthplaces! His evidence, as he has presented it, is persuading, mainly because of the seeming associations with a "parent Galaxy". For, these pairs appeared to be equidistant on either side of the Parent, and always positioned upon its minor axis! 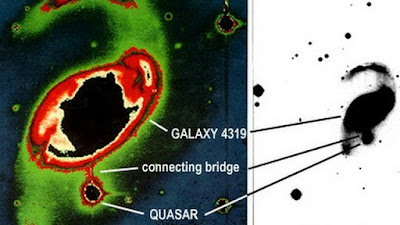 Having noticed this many times, Arp began to purposely seek them out, and remarkably found more than single pairs involved. In fact, further pairs on the same minor axes were found, and their Red Shifts decreased with distance from the parent - NOT continuously, but in a quantised pattern. Clearly though, directed searches for certain configurations among billions of Galaxies, might turn out to present a "selected-out false generality".

But clearly, if the correct scheme was devised and undertaken, such remarkable chance conformities would be easily revealed!

Of course, if Arp were right, the whole of the current Cosmological Theory, including the Big Bang and the age of the universe, would be undermined, and new answers required literally everywhere. And Arp was aware of these difficulties, and attempted his own alternatives to the usual Big Bang scenario. Yet, literally thousands of reputations and multitudinous published papers have been produced, all over the World, by prestigious and eminent scientists. Many would have a great deal to lose if he were right!

Now, the writer of this paper, a physicist, also has an axe to grind, concerned with the necessary presence throughout the Universe of a totally undetectable Substrate, which is both affecting-of, and affected-by entities and processes taking place within it.

This too seems a very way-out suggestion, except that unlike James Clerk Maxwell's description of the then universally believed-in Ether, the undetectable units of such a substrate have been theoretically devised involving only known Elementary Particles, and with only this single inclusion, every single one of the anomalies of the Double Slit Experiments have been physically explained. In addition, both the Propagation of Electromagnetic Energy through so-called "Empty Space" as also been cracked, as have the physical extension of active fields in the same situations.

Now this research is still ongoing, but it too affects everything currently supposed to occur in Empty Space, due to the densities of the Universal Substrate in different circumstances, as they also do Arp's theories. And another potential resonance occurs with the Origin of Matter, in both the new theories it comes from the pre-existing Substrate.

Clearly, both theories might be buried by the necessary research, but if they are wrong, so be it!

However, there is obviously a great deal wrong with the Copenhagen Interpretation of Quantum Theory, as well as the consequent theories of the Cosmos, and such research might well rid us of those too!
Posted by E Journal at 11:23