The True Meaning of Scale Invariance 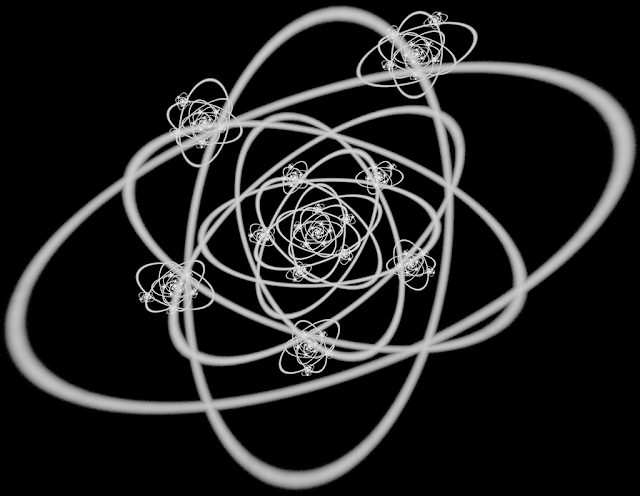 What actually is Scale Invariance?
It was lauded as a significant finding in Fractals, which seemed to indicate that the very same patterns could recur at all scales, for the very same equations drifting into “chaos”.
But, what is really being revealed?

For, let us be absolutely clear, Fractals and “chaos”, as were the ground for this discovery, are certainly features of Form alone: indeed, I insist on clearly labeling such areas of study as Mathematical or Formal Chaos.

For, before we trundle off into what is a very straightforward account of Scale Invariance, I must first differentiate between this purely formal area and Turbulence in the real, physical World – for it really does exist and is, in the usually inverted way, also put down to a merely physical embodiment of Formal Chaos,

It isn’t, of course!

If anything, it has to be the exact opposite way round with Turbulence! For Pure Form does not and cannot drive concrete Reality. It is a definitely physical Reality that delivers Form! Yet, perhaps surprisingly, Pure Form does have its own laws, which, as distinct from those associated with phenomena in the physical World, can be seen as Absolute Truths. Yet though these laws only relate disembodied Forms – formal abstractions, they can always cause misconceptions when they are carried over in concrete Reality.

NOTE: Now, such issues are complex and interesting, and have been investigated elsewhere by this author, but the full arguments cannot all be included here, though anyone interested in a Philosophical approach to Mathematics will find a large amount of detailed reasoning on the author’s SHAPE Journal Site on the Internet.
And I suggest a look at these, if this paper alone seems insufficient, for I am likely to leave out many a point, because it has been adequately dealt with elsewhere.
Now, returning to our stated area, I must clarify why it is important to bury the misconceptions around Scale Invariance.

The mathematicians, after an initial panic at the discovery, soon became delighted that in purely formal experiments on computers, driven there, it is true, by entirely formal relations, they were able to generate some of the “break up” of form without ever leaving their “sacred” formulae. And this seemed to indicate, once and for all, that everything of significance did indeed reside in the equations alone. “As we always knew”, they would exclaim, “It is Form that delivers all of physical Reality. Once we have the formulae, we have everything we need to “explain” the world (my quotes)”.
And such is, of course, no longer only the stance of the mathematicians, for since the victory of the Copenhagen Interpretation of Quantum Theory in the 1920s, it has also been the position of the sub atomic physicists too.

Yet it is, in that area (the study of Physical Reality), an abandonment of materialism for idealism, though in a shamefaced, positivist way! For disembodied and indeed purely formal relations cannot drive concrete Reality. It has to be the other way round!

So, the discoveries of Mathematical Chaos were considered proof that this philosophical stance (if you can call such an amalgam that) was right! But if you insist upon the exact opposite, and have all Forms as determined by physical Reality, then Scale Invariance in certain “chaotic”-type formulae, become merely a special case of the universal nature of all Form.

NOTE: Also, as has been shown by this author, it is imperative not to confuse the Real world (Reality), with that alluring world in which only Pure Forms exist (Ideality). For though there is a sort of mapping between them, it is only causal in the Reality-to-Ideality direction. It is never true in the opposite direction. And if you ever use Form as a cause, it simply means that you DO NOT know what physical things caused it to be so in Reality.
All equations are descriptions and NOT explanations.

For, the very same general Forms, with the same equations (apart from the differing values of the constants involved) appear throughout Reality, and at widely different Levels of Organisation. But, of course, no scientist (worth the name) would say that they were all caused by the very same driving essence. Indeed, such a position smacks of some entirely non-physical, driving “principles” causing absolutely everything. Where would these come from?

Would there still have been such driving essences prior to the Big Bang – or in totally Empty Space?
Are there eternal and non-physical drivers of all that happens that were always true from the Origin of the Universe to its final demise? For if so we are talking of eternal laws! But, as soon as we allow the development and creation of the entirely new in that sphere, the whole standpoint falls to the ground, because without the permanent “Hand of God” in such a process, it means that Reality is “self-developing”!

Frankly, that idealist position constantly smacks of a designing and maintaining God, and is totally reprehensible to a real scientist, who actually knows otherwise, due to his experience and discoveries. (If you could, you should have asked Darwin!)

For as he or she delves ever deeper into their chosen area of study, they not only find physical causes for things, but also see every single “essence” totally collapse at the crossing of the boundaries of each and every Domain of Applicability – absolutely everywhere they look!

The idealist position is unsustainable for real researching and committed searchers for the “truths” of the World – and they always know that every single extraction that they make will definitely need to be changed to make it better many times in the future. [Only mathematicians deal in Absolute Truth, and that is NOT of this World!]

I always like to characterise Fractals and Scale Invariance NOT as the fundamental truths of Reality, but as essential constructive “frigs” of animation! “You want a real-looking coastline?”, the mathematician asks, “I can give you several. Look at these and with a few changes of constant, I can tailor your choice to fit your needs!”

Now, in case anyone is thinking of dismissing this contribution as that of a non-mathematician, may I correct you? I have been doing serious Mathematics since I was 12, and am a qualified and practising mathematician since University almost half a century ago. Indeed, Mathematics is the essential Handmaiden to my main professional specialism, for I am also a qualified physicist. Finally, I also rose in yet another specialism to be a Director of Information Technology in a College of London University. So, I am also an expert in computing having been in 4 posts in Higher Education in Hong Kong, Glasgow and London.

Hence, these criticisms are not uninformed prejudices from without, but highly informed and valid criticisms from within!

Indeed, many years ago, working with Jagan Gomatam, we investigated Van Der Pol’s famous equation, applied instead to modelling the workings of a living Heart (purely formally of course), and via forced mathematical Chaos, using iterative formulae, managed to create formal breakdowns, which mapped onto real world Fibrillations and even Heart Attacks.

Jagan, who was the best Mathematician I ever worked with, did the Mathematics, and I implemented them on the University’s computers Jagan also did internationally renowned work on Chemical Reaction Fronts in Liquids using the same oscillating reactions as were used by Winfree in the USA.
He was a master of his craft!

Yet at no point was Mathematical Chaos the cause of what happens in the failing living heart. That is NOT due to its equation moving into Chaos, but to real physical causes that undermined its previous Stability – a state in which a seemingly permanent stability of a System – the heart in a living body, began to be significantly undermined to at first oscillate, though still functioning, before biting the dust as a functioning system.

NOTE: It is interesting that once the conditions for a “Fibrillation” had been established they would continue exactly the same forever in these simulations. That is never what happens in the real world! The purely formal treatment could not handle the real dynamics involved.

Instead of studying Mathematical Chaos to “find the reasons” the scientific way would have to be to study real, physical Stabilities, both in their initial establishment, their continuing maintenance, and then their final demise.

Once again the writer of this paper can claim to have published The Theory of Emergences, which detailed the trajectories of all such transitions happening at all Levels of Reality, and the objective of such researches was never to end up with a formula.

Because such a transition moves through a multiplicity of Phases in quick succession, and crucially each new phase cannot be predicted from the formulae of its immediately prior Phase. Indeed, the final result of a successful Emergence – the establishment of an entirely New Level, never before in existence, is also totally unpredictable from anything in the prior Stability! In the processes of the establishment of the new Level the entirely New is created! Do you want an example? It is Life!
Posted by E Journal at 19:06