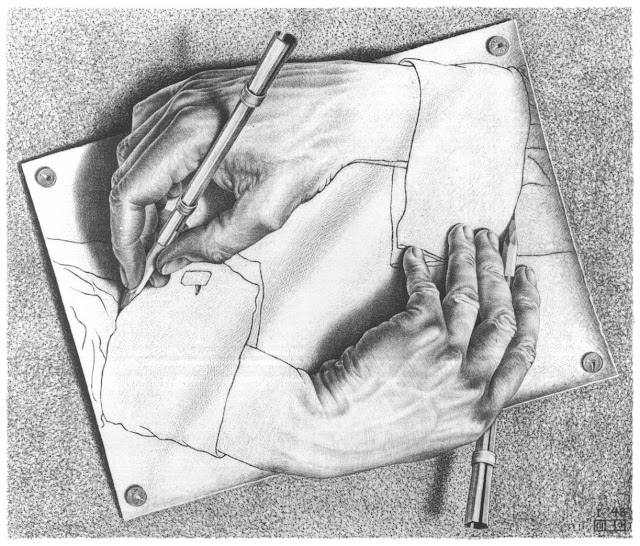 The revolutionary methodology of reasoning, handed on from Hegel to Marx, was of a very unusual type compared with what had been universally employed previously.

For, being holistic, rather than pluralistic (as literally all prior reasoning had been, and, of course, all of Science certainly had become) the new approach started from the total inter-relatedness of all things, and hence fulfilled the credo, “Everything affects everything else!”.

But, such a stance does seem to totally exclude the possibility of Analysis, which is surely the central plank of the scientific method, and has to look beyond individual (and separable) contributions to integrated and mutually transforming effects at a higher level, to get any sort of handle upon how Reality actually behaves.

But, in spite of these major difficulties, it alone can cope with both Change and Transition as caused processes, and that has to be its critical contribution to human reasoning.

One vital feature was that the multiplicity of contributing factors meant that in any situation both complementary, and even totally contradictory, factors would certainly be present and making a contribution. And, any observed overall effect, would be the result of the increasing dominance of certain mutually conducive factors over other less effective sets. And, even that situation would never be permanent, but would have the ever-present possibility of such a “current “solution” being overturned as the general situation changed, and even a directly contrary dominance could come into overall hegemony.

The conceptual model adopted, therefore, became one of contradictory pairs of overall outcomes, and as the most important aspect of the studied situation, its development into something entirely different. It could be dealt with (to an extent) by the activities of these Opposites – the Dialectic of the situation!

Now the validity of this rather surprising approach has been confirmed innumerable times, but only in developments: it is not about stable, quantitative and slowly-changing situations, but about transforming and qualitative changes.

Perhaps before this discussion gets out of hand, the crucial evidence of The Impasse should be brought in?

Most conceptions of situations are far from being the “absolute truth” of it, but are usually an acceptable and useable approximation: the assumptions, processes and even entities involved do get reasonably close to what is going on, and in most stable circumstances “do the job”: conclusions and even predictions can be relied upon. But, such is never the case forever. No matter how clever (or even wise) were our suppositions, there will always be situations where the conceptions and assumption fail. Now, our fallback practice is to have a second-string theory, which also works in some very closely related cases, and we switch to this to see if it does the job here too. And sometimes it does!

We then have two mostly workable alternatives, and we pragmatically switch between them to be in the position to carry on with our objective.

NOTE: But, we must not confuse this with pure unprincipled Pragmatism, as displayed in the current models of the Nuclei of atoms. For there is, at the present count, an unrelated set of some twelve alternatives to juggle between, This two model alternative is not only much more tightly constrained, but, as it will turn out much sounder philosophically.

But, there are cases when even these dichotomous pairs fail to deliver anything at all. And this indicates a true impasse, where the possibilities of the current situation have been left behind completely. No matter what we do using these alternatives, they still always lead to a contradiction: they are both wrong! The situation seems to defeat our usually applicable pair of alternatives, and we seem to be able to go no further.

But, as you may already have guessed, our two alternatives can never be wholly arbitrary, or unrelated to one another, they both will have a measure of the Objective Content of the situation within them, and it was that, which caused them to becomes our pair of alternatives.

But the occurrence of The Impasse, instead of being a dead-end, is perhaps the much more productive situation - for it is only here that the necessary transcending solution can actually be addressed.

NOTE: In his book Zen and the Art of Motorcycle Maintenance Robert Pirsig called such situations the vital periods of “Stuckness”: situations to be sought out and welcomed as the places to make real progress in our understanding.

Dialectics takes the naturally emerging pairs of such dichotomies as temporary truths in the short term, but also as anvils on which to beat out a transcending alternative.

One obvious area, totally unintelligible to today’s physicists, involves the alternatives of Wave and Particle in Sub Atomic Physics. And, perhaps, the most famous is the perennial Descreteness and Continuity dichotomy, as Zeno was clever enough to demonstrate so superbly in his Paradoxes.

But surely, such a method, is not, repeat NOT, predictive, as are most quantitative equations in Science, though, on the other hand, it does give the person a changing situation - to think about what factors are involved, and which way a transition is likely to occur. In contrast to the usual method in Science, which can ONLY predict within its appropriate and defining Domain (set of producing conditions), the holistic approach is much more general and unconstrained.

The holist alternative does attempt to juggle all the involved factors as changes occur and by defining them into pairs of opposite-yet-possible outcomes, points strongly to a particularly limited pair of possibilities.

It is by no means as crude as it at first sounds, for whatever “wins” in a competition of many contributing and distortable factors, will always get there due to its cooperating, and even integrated and mutually modified, set of conducive factors to ensure dominance. While, when a transition does occur, it will again be to one with a similar set of conducive factors, which are likely to be the opposite of what pertained before.

The natural marshalling of simultaneous factors will always take such a form, for such groupings ensure proliferation best. It is about multiple factors with different directions interacting to lead to a particular overall dominance.

A pluralist equation doesn’t even include what factors are present. It is merely a quantitative relation within a static, non-changing situation: it is incapable of saying why it behaves as it does, and the nearest it can get to suggesting what might replace it, is for it to “blow up” into one of its terminating singularities.

But, though this contribution is only a beginning, Dialectics did reflect the true dynamics of multiple interacting factors in real systems. The seemingly arbitrary concentration upon opposites is NOT what was being inflicted upon the situation by Mankind: it was NOT simply another imposition. For the division into conducive and antagonistic contributions to combined effects did cause related groups of factors to form conducive, mutually-supporting sets or systems. And in any complex situation, the direction of these proto-systems would be defined.

It is also important to understand just how dominance occurs: it is basically a version of Selection, which I have elsewhere termed Truly Natural Selection, and it occurs not only in Living Things, but at all levels, even between chemical reactions, which might compete for the same resources

And, a working through at this basic level turned out to deliver a viable model. Mutually conducive or supporting processes, where the product of one was the necessary resource for another, would certainly mutually affect one another. And such could even develop into quite long sequences or even cycles.

Clearly, as such systems came together they would really be greatly more successful than lone processes or mutually contending pairs of processes. The conducive systems would soon collar the majority of the available resources and begin to dominate.

Yet, such sets would not all require the same conditions and resources, so many such systems would occur.

The rivalry between them would be of a different character. It would not be direct competition – for they required different things, but efficiency and rate of production would tend to some systems growing bigger then others.

NOTE: though too early to deal with it here, these ideas have led to the Theory of Emergences, which addresses how the “wholly new” comes into existence – clearly crucial in any complete theory of Evolution.