Can We Blame The Messenger? 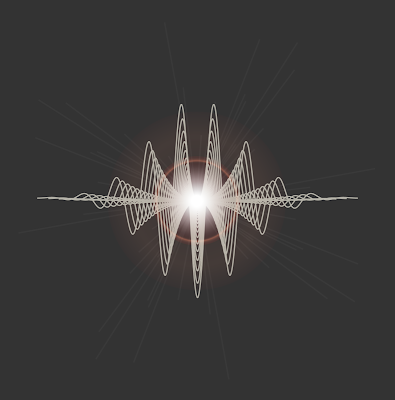 In merely beginning to read yet another article by Michael Brooks in New Scientist (2928) on entanglement and other things in Quantum Theory, I realised that the properties (all ascribed to a disembodied quantum of electromagnetic energy) simply could NOT be correct! I don’t mean, of course, that they don’t exist, but I do mean that some, at least, are definitely not properties of the conceived-of Photon.

Brooks chooses to bring in Spin, and though he can only really describe it as the property of an extended material object, there is also little doubt that he is also insisting that it is a property of the Photon – conceived of as a totally disembodied gobbet of electromagnetic energy.

Now, immediately to a physicist, such as myself, the warning lights begin to flash (in fact several of them!). The first is triggered by the idea that you can have a gobbet of pure energy, totally separate from any matter whatsoever. The second is set off by the idea of such a gobbet actually spinning, or undergoing whatever it is that is termed “a spin”.

And, in the same few initial paragraphs, he makes it clear that we have absolutely NO choice, but to accept such consequences of Quantum Theory (or more precisely the Copenhagen Interpretation of it), because its statistical/probabilistic equations deliver very accurate predictions as long as the problems are posed overall, rather than for particular individual entities.

The Ptolemaic Theory of the Solar System, in its most developed form, gave accurate predictions, but it was, nevertheless, totally wrong!

Are we really to promote mere Forms, or Patterns, to be the determining essence of all things? We cannot possibly do that, for a very simple reason.

A particular Form can be used to predict in a whole causally unrelated range of phenomena. Forms are universal patterns, and not common causes. And this means that though they can exist all over the place, to make them the determinators of Reality is foolish.

How can these very different phenomena, which conform to a single Form, be assumed to have the exact same cause, and a purely formal one at that? That would only be the case if that Form were capable of being a physical cause itself! And, the language of these scientists always gives away their erroneous standpoint. They say, “This equation makes the phenomenon happen in this particular way!” They are clearly idealists and have actually abandoned materialism! They insist that things don’t happen due to concrete physical causes: they happen in conformance to the appropriate abstract equation.

I could go on with this line of argument, but it will never convince the Copenhageners – so, I’ll take another tack.

Gobbets of entirely disembodied electromagnetic energy (Photons) cannot exist, and certainly cannot move across totally Empty Space at the Speed of Light! In fact, nothing can move at that speed.

So, how does propagation occur, for we know that it does?

If we do assume that particles of matter can exist in such an environment, these will also be prohibited from moving at the speed that has been established for electromagnetic radiation. So, how can we transcend the seeming impasse?

We can do it via the presence of a Universal Paving of so-called Empty Space, populated with relatively stationary material entities (or receptacles), which can not only hold gobbets of E-M energy, but also pass it on, bucket-brigade-fashion across the paving, The material entities involved must act as receptacles for such gobbets of energy, NOT as is sometimes assumed, to carry it across the Empty Void, but to merely pass-it-on.

Now, such suppositions DO NOT, as they stand, deliver any sort of acceptable theory. Many questions still need to be answered, and a wholly new approach made clear.

To achieve an acceptable theory we must:

- Explain how these receptacles hold individual quanta of E-M energy

- Show how these receptacles can be wholly undetectable

- Explain the constant Speed of Light in a very different way

The model for addressing the first question is very clearly the atom, which has no difficulty in fulfilling this requirement. So, an analogous structure to the atom will have to be involved.

The second question can be resolved with the example of the positronium, which is itself undetectable, being constituted from a negatively charge, ordinary matter, electron, and a positively charged, antimatter positron. And though this has certainly been indirectly detected in high-energy accelerators, its very short lifespan in those extreme circumstances doesn’t have to pertain in Empty Space.

The constant Speed of Light becomes a property of the Paving, being the speed of induction of a quantum of E-M energy from one receptacle to the next.

Now, this is by no means a thoroughgoing definition of this Paving and its constituent parts, and we must here forego such a detailed exposition. But, the papers delivering this are already available on SHAPE Journal, so can be accessed very easily when required. Search the journal for Empty Photons.

But, we must reiterate an important difference with this Theory. The quanta never exist outside of such receptacles in propagation. Neither do the receptacles themselves move across Empty Space to deliver their E-M cargo. The movement is ONLY of the quanta, but not as moving, independent entities in Empty Space, but as induced gobbets passed from receptacle to receptacle.

So, within the purpose of this paper, we have a dilemma –

Of course, to answer these questions, it matters what the receptacle is made of, and how it can hold a single quantum of electromagnetic energy, and the answers are already known.

Our receptacle must have much in common with the atom! It must contain at least two sub particles with one orbiting the other, to allow it to be able to carry out the very same getting, holding and delivering of quanta that an atom can do.

Indeed, though initially defined purely theoretically, our proposed receptacle has been found to actually exist.

Now, it took a long time to find it, not least for alternative theories for so called Pair Production, did not include such an entity, but it was finally identified as the source of such events in High Energy Accelerators (as already mentioned above).

After this discovery, it became abundantly clear that this positronium, was indeed made from a mutually orbiting pair of an electron and one positron, and with these cancelling out both in Matter and in Charge, the invisibility of the particle in space was easily explained.

Now, the proposal for a universal paving of all of Empty Space had also long been discounted, because no such paving had ever been detected. But, if it was composed of these positroniums, that would explain the pavings invisibility too. And as the sub particles mutual orbits could be promoted to higher energy levels, it was clear that the required functions of getting, holding and delivering quanta (as in the atom) would be available.

Clearly, the instability of the positronium in High Energy environments, at first argued against it being able to carry out these roles, for its lifespan was momentary in such conditions. But, of course, the main habitat for these entities in this theory would be in Empty Space, where their stability would be assured.

Returning to the “messenger and the message”, the problems stated by Brooks fall away, as the various properties detected would be from TWO related entities – the messenger – positronium, and the message – the carried quantum of E-M energy.

Such phenomena would, henceforth, have to include an extra and transforming player – the Paving. And, instead of Wave/Particle Duality, and the other anomalies of Copenhagen, we would be able to attach the contradictory properties to different constituents.
Posted by E Journal at 15:32