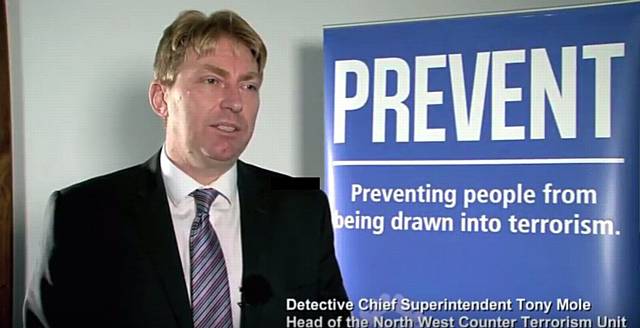 Yesterday (see below), I wrote about the Manchester Bombing in the City in which I was born and brought up, and about the responses literally across the board, commending a "we will not be intimidated" response. Literally everybody interviewed blatantly ignored the real causes in a constantly repeated hymn to so-called British Values and Intransigence.

How dare they include us in their guilt, and their way of coping with it! We didn't cause such an inhuman reaction: they did.

And, when it couldn't be avoided any longer, they finally got around to what was already being done, and could in future be done, to combat the rising tide of militant Islam, among Moslem youth. And, "everyone agreed" it was this Prevent Initiative, only more so, that would do it! What a proof of both blatant lying and implacable incompetence.

As if such a web of their lying words could gain-stay the real causes of such hate, namely intolerance, racism and even imperial invasions, as have been, and are still being carried out by the Western Capitalist Governments across the Middle East and North Africa.

And a whole range of people from Politicians, and Experts-on-Terror, to even "moderate Imams" were paraded out to support this mockery of a policy.

"Prevent!" - such a fake smokescreen merely covers up their real motives -they somehow want a quiet and quiescent Middle East, so they can get their valuable OIL cheaply and in peace.

The only valid policy, is for the Left to recruit moslem youth in large numbers into the anti-capitalist fight across the World.

Workers of all countries must unite against the war mongers and the murderers!

For Socialism and Freedom!
Posted by E Journal at 10:34