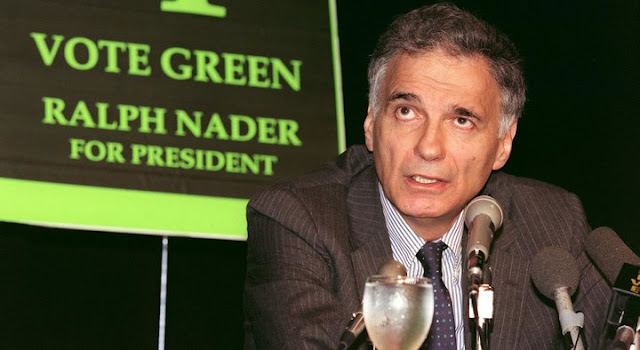 Ralph Nader, in a recent public meeting in Washington D.C, including, among his audience, a surprising number of very similar-to-himself past agitators, started his contribution with a liberal criticism of the current American political and corporate systems, basically from the standpoint of the US Constitution, and the Rights with which it had "endowed The People", and, by means of which, only a tiny fraction of the population could (and, indeed, in the past did) right the wrongs, first by concerted agitation, and, thereafter, via the usual legal systems of democracy, to get laws changed to complete the job.

It was an echo from the past, and an inaccurate one too! For, it effectively gave all the credit to small groups of people, like himself, who stood up and fought politically for Justice. But, that wasn't the full story at all!

He never mentioned the Socialist and Communist parties, who, along with the vastly growing Trade Unions, had forced Roosevelt to concede to their demands "OR ELSE!"in the depth of the 1930s Depression. That alone set the tone in which the small groups of liberal "do gooders" could then, for a time, effectively "act for the people". It had never before been the case, before that near-revolution, nor was it the case since that justified "Fear-of-the-People" had subsided, following the Second World War, and the gradual re-establishment of the total dominance of Corporate Capitalism.

No, it was never liberals like Nader who re-established our rights, but the Working Class in conscious political action, and with a Socialist leadership who knew what they had to do and why! And, it was that leadership that had been attacked and destroyed in the McCarthyite Witch-Hunts that had deprived the Working Class of that vital guidance, and which instead allowed the re-establishment of their own dominance, as of old.

So, Nader's admonishment of the Middle Class liberals for their reticence in fighting injustices was a sure revelation that he would never fight the real enemy and cause of both inequality and environmental destruction - The Capitalist System - in its unavoidable lunge to the Right in response to the major and still unresolved recession of 2008.

Once again it could only be addressed by a dedicated Socialist and genuinely anti-Capitalist leadership of an increasingly rebellious Working Class.
Posted by E Journal at 11:27