A Gateway to the full Richness of Reality?

As soon as you consider the consequences of a Holistic World, the possibilities as compared with the usual strictly Pluralist standpoint actually explode dramatically into a host of new possibilities - not only into myriads of previously unconsidered alternatives, but also into the effects of sliding amounts of different components in all compound entities and processes, but crucially, in addition, into also including both rich joint interference patterns, and, in gradually varying mixes of different components, even how they produced consequent combined, mutually affecting, and sometimes, significantly, wholly unpredictable results.

Mere quantity changes are expanded into changing qualities, and even the emergent production of the wholly new! The traditional pluralist approach cannot deal with such in any meaningful way: we just have to accept them and find pragmatic ways of including them.

Only the holistic approach admits there is more than mere complication in the emergence of the new, and it isn/t a purely continuous process: sometimes it requires a major dissolution to even make possible a new direction of developments. And as, distinct from the old conceptions causality can act in both directions = from the old to the new, and from the new to the old. What is actually possible leaves the usual assumed combinations of fixed entities and eternal Laws well behind, on the foreshores of the Pluralist World: the majority of the vast oceans of the Holist World remain to be explored!

Now, perhaps surprisingly, the cornerstones all of Mankind's effective intellectual disciplines, ever since the Ancient Greeks, have been entirely dominated by the Principle of Plurality - a definition of the "nature of things" that always treated them all as qualitatively-fixed, which had originally been applied to the shapes of things, and related all existing shapes to combinations of individual Perfect Forms, that is as mere additions of various amounts of several of those always-the-same components. Indeed, the following major successes with such Shapes, enabled not only the construction of a powerful means of dealing with Forms in general, via Mathematics, but, was also exported to form the basis of a new reasoning with Statements of Fact, termed Formal Logic! And, within a generation, was also extended to the early attempts at Science.

Now, elsewhere, by this theorist, this has been rigorously contended as totally ignoring all Qualitative Change, and even the indisputable Evolution of things in a trajectory of qualitative developments.

For, absolutely nothing in nature is a mere Legoland-like constructional puzzle!


Clearly, the diametrically opposite Principle of Holism, with its tenet, "Everything affects everything else!" has to be much closer to the Truth, yet it hasn't been comprehensively applied to any of Mankind's Intellectual Disciplines, thus far! But, the flaws of Plurality have long been known, though never recognised as such.

The best early critique was formulated by Hegel, and converted from his idealist approach to a strictly Materialist one by Karl Marx. Yet, a comprehensive application to Physics has never yet been attempted.

Now, this is currently underway by the writer of this paper, but within his other interests, it rapidly became clear that the most appropriate area for a truly Holist Approach to be both demonstrated and even developed, just had to be in Music, and especially in Electronic Music!

After centuries of pluralistic structures in Music, particularly in the West, the forms began to "break the rules", though in a remarkable way still using instruments actually constructed to deliver the old pluralist scales. Yet, certain stringed instruments, without-frets, did allow portamento - sliding between "legal notes". And, an increasing awareness of Oriental music, (particularly that of India) revealed a much richer sonic world, with instruments expressly designed to make portamento an integral part of the artistic expression.

But in the 1960s the musical experimenters using tape loops and early electronic musical instruments, such as those used by Terry Riley with his "In C", also extended the variations to a much wider set of changes, initially at least, NOT totally under the control of the players.


Like the fractal mathematicians watching their constructions, produced by algorithms on computers, generated ever more unpredictable forms, so the musicians did likewise with combined cyclic sounds and very slowly indeed reflected another aspect of Reality.

And, in Physics, the French physicist Yves Couder, focussed primarily upon the properties of liquid media, devised analogistic experiments at the macro level, using a liquid substrate, and absolutely nothing else, to produce persisting entities called Walkers, which began to reveal qualities analogous to those occurring at the Sub Atomic level, including quantised orbits.

Now, those may not seem to be related to our thesis here, but they are! 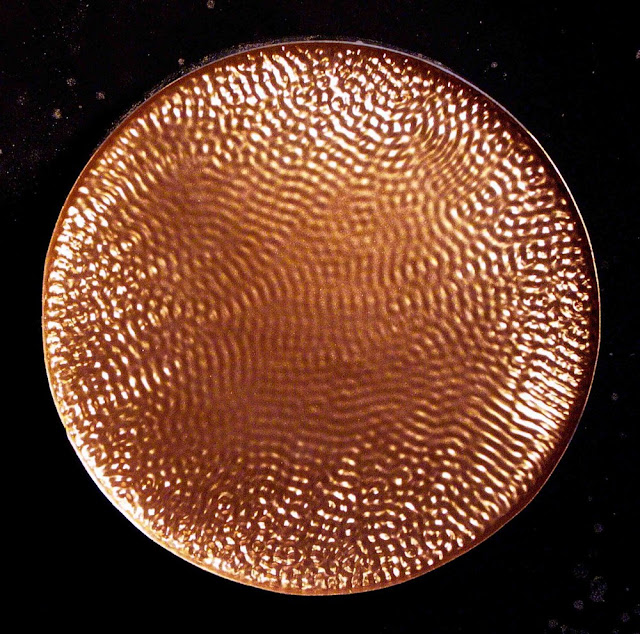 The Holist approach is much closer to natural Reality than Plurality, especially when phenomena occur in a Universal effectible and affecting Substrate. And, by far the most controllable discipline involving its propagation and receipt via a medium is MUSIC!

And, it has the property of being directly receiveable by the senses of human beings, especially those with a musical bent. This enables not only the discovery of the wholly new, but when the very instruments of production are directly under the investigators hands, variations can be made to listened to examples explored with immediate and direct feedback.

Now, Terry Riley and his colleagues were performing musicians rather than scientific investigators, so they were making primarily artistic decisions, as to exactly when they came in with their contributions. But, that meant that they did not have a complete idea as to how their contribution would affect the following overall piece.

Other performers since, playing the same "In C", decided to have a random number generator choosing when the various contributions would be added - you could just as easily have scientists choosing when to bring in certain elements to achieve certain sonic effects.  Clearly all three versions would be different, and reveal different "music"! But there can be no doubt that such investigations would go beyond what the more usual kinds of music would deliver.

More on this idea soon...