The latest issue of the SHAPE Journal is on Abstraction. From a beginning some years ago, with The Processes and Productions of Abstraction, this theorist has now made another foray into this subject, this time going well beyond that initial diagram, and has begun to address Abstraction applied to Dynamic Change too. This following paper shows just where this new turn is beginning to lead. 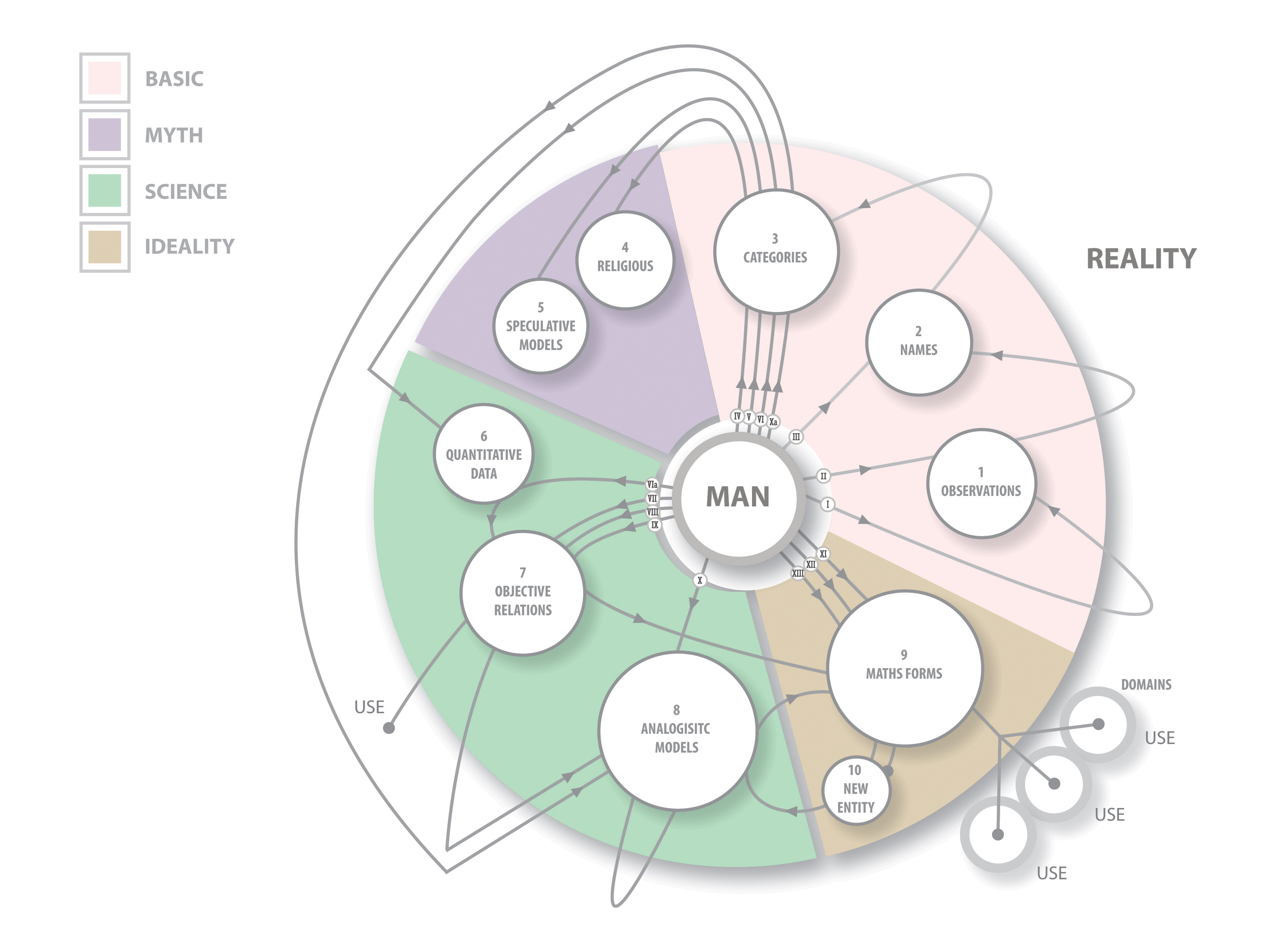 Having more generally addressed Abstraction, though mostly at a single Level, and entirely within a local Stability, we now have to leave the confines of such a pluralist standpoint, and instead, reach further into both Qualitative Changes, and, indeed, what we term as revolutionary transformations that create wholly New Levels – termed Emergences.

The whole methodology of abstractions in Science is locked into a strictly pluralist perspective, which sees all acting relations as entirely separable, and this assumption makes any found relations into fixed Natural Laws. But, actually, such can only approximate to Reality, and limit the applicability to within either natural or man-made stabilities only, and, indeed, can never transcend a Level boundary.

And, Laws at a higher Level can never be explained in terms of the prior “producing”, lower Level.

Indeed, it would be entirely incorrect to see the new Level as a natural causal consequence of the Level that preceded it! This might be surprising, but, in doing so, we are applying what is usually acceptable for within Level relations, to still be legitimate across Level Boundaries, and that is not the case.

It is because such a revolutionary transformation is never a continuous, incremental process, but always involves a truly major crisis and collapse, followed by a fundamental re-building along totally original lines. In other words, none of the factors involved in the re-building would have even been present, as such, in the erroneously-called “producing” Level!

So, we have a major problem!

We have learned how to use the very same methods within each New Level, as were successful within prior Levels. And, though we can get away with this, it will only work for processes entirely within the new Stability. And, we can certainly never fully explain the features of that higher from the lower! Indeed, the source of the newly-created Level is only possible via a situation that the prior Level would never allow – indeed, a general chaotic tumult, in which literally all the characteristic stabilising relations of the prior Level have been totally dismantled! What then occurs is like a rebuilding, not just out of old “bricks”, but also, and primarily, involving entirely new ”bricks” of a new construction.

And, this is why the explanation of events like The Origin of Life, in terms of prior, non-living processes is impossible! The actual basic context has been radically altered and relatively few factors remain unchanged, and even those that do survive intact, and play no part in the features of the new system.

So, what happens in the New Levels of Reality?

They beget their own relations and abstractions, though, once more, we always predicate them upon a totally pluralist perspective. Yet, what can these new ideas mean for the universally accepted Principle of Reductionism – which states that all causal sequences are traceable, all the way down to fundamental particles, and their basic Laws? Obviously, it makes such an assumption totally unfounded and unavoidably misleading!

Now, the real, overall trajectory of Development of concrete Reality is certainly NOT pluralist! It may well involve long periods of Stability, in which Plurality is a fair approximation in local, stable contexts, but each and every epoch will always terminate by being continually undermined, by its own internal contradictions, leading to, first, a major crisis, and then, a total collapse of the stability, into what appears to be complete Chaos! But, such is not our usual conception of “chaos”, in which totally random, undirected processes get absolutely nowhere (for that is yet another kind of Stability, is it not? On the contrary, this real kind of “Chaos” is both the most productive and creative interlude that is possible to exist!

We call such an event an Emergent Interlude! 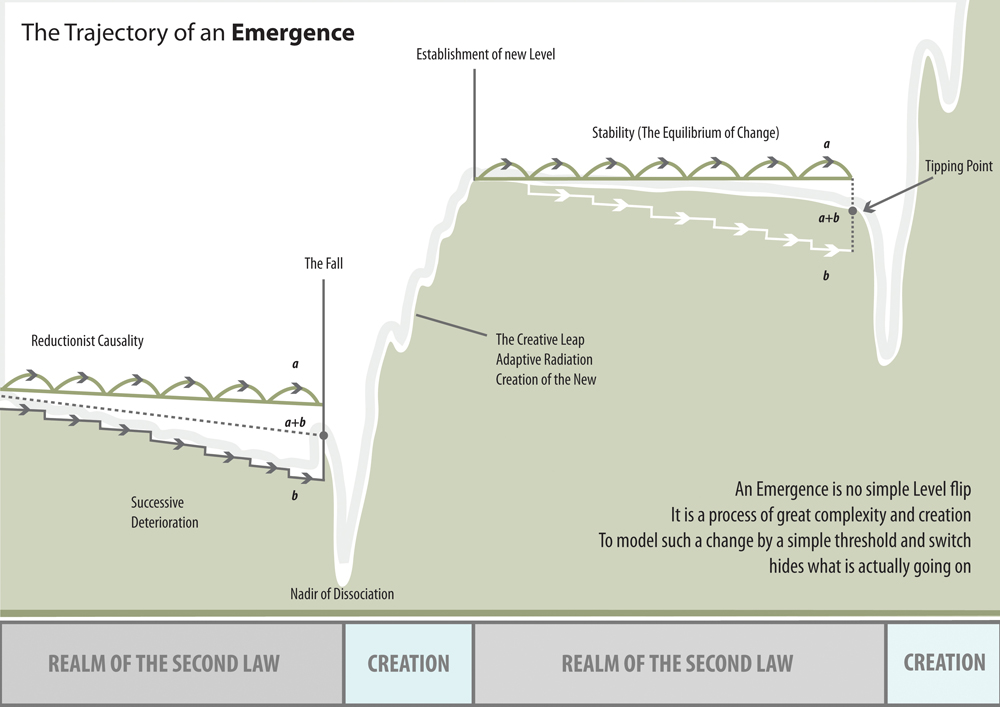 Yet, thus far, in this account, we have only described its initial catastrophic phase. From the results of that dissociation into a seeming Nadir of Chaos, multiple productive processes accelerate, and begin to associate into conducive, ever-more-complex systems.

Why they happen now, is that all such constructions had previously been prohibited, or even destroyed, in the prior Level Stability, but all of its many restraints have since perished along with the Level itself, and so free-forming sub-systems appear everywhere, usually competing, but occasionally forming ever bigger, conducive super-systems, and ultimately one such system not only grows largest and dominates, but also includes sufficient, destructive sub processes within it, directed at all other non-own-system processes and even systems. So finally, a new overall Stability is achieved on a new basis, with its own Laws!

And, perhaps surprisingly, the assumption of Plurality gets more acceptable again, and the old methodology can be used once more, though, of course, with new components.

Clearly, if anyone wants to plumb the causality of Reality from top to bottom, they will never be able to achieve it, using only a pluralist perspective and methods. The crucial links in the causal changes will occur ONLY in the Emergent Interludes, and it is there that a wholly new Holistic Science must be built – literally from scratch!
Posted by E Journal at 17:42