This new issue is a kind of review of how far we have got in describing and assessing Man’s struggle to understand his world.

It has not been a straightforward history, for Man had had to literally change the game, in order to make any progress in understudying both his own context and, indeed himself. But in making that significant progress, it has been undoubtedly a heroic trajectory!

It is very important at this stage that a difference between Knowledge and Understanding be established. For, the latter was never an automatic development from the former.

To use the common description “Man has had to pull himself up by his own bootlaces” - or to use V. Gordon Childe’s appropriate title Man Makes Himself. Attempting to understand the world has not been at all easy, and perhaps surprisingly, has been predicated upon just how successful Man has been in more everyday tasks of survival and even prosperity. For, his basic general method was initially to grasp whatever was to his advantage, whatever that entailed, and gain himself both a measure of leisure and repose.

The brilliant ideas did not come first! For, it proved almost impossible to solve all the many problems of Mankind’s usual hunter/gatherer existence, including the many seemingly unavoidable and unbridgeable impasses in his contradictory development.

For well over 90% of human history, Homo Sapiens roamed the Earth in small family groups, his most sophisticated tool being a sliver of brilliantly knapped flint. Clearly, significant developments in his mode of life were impossible without large gains in that sphere. And while there were brief interludes during that long “childhood”, when he was able for a time to acheieve remarkable things - such as the cave paintings at Lascaux: they were brief and excenptional events. Something permanent in his means of life had to occur, to enable real and persisting gains. 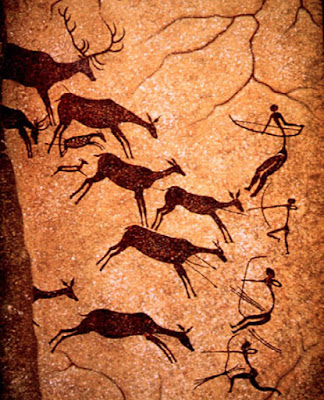 It wasn’t until the invention and spread of agriculture and animal husbandry in the Neolithic Revolution that the developments in human understanding really took off. For instead of constantly living on the edge of survival, Man could then settle and gather in growing aggregations of people.

Even then the trajectory of developement was never smooth or incremental. Indeed, it was characterised by a series of “false leads” which enabled progress to be made, but which always, in the end, ground to a halt in yet another impasse.

So this brief foray attempts to trace out the subsequent paths, dead-ends, and hopefully the way forward, from where we have finally reached.