Why Socialism Failed I


Key Questions for Socialists: Part I
Beyond Within-Capitalism Activism

As a socialist all my adult life, and a committed and a still-producing Marxist theorist, and finally someone who has been actively involved in the Revolutionary Left for most of that time, I have some important criticisms of what comrades concentrate upon, while often ignoring other absolutely essential areas without which the successful conclusion of our efforts will be impossible.

In truth, the state of socialist priorities is, indeed, a consequence of acting within Capitalism, to win hearts and minds of the Working Class, for many things are considered to be unaddressable in that context - they are questions about what will have to be done both establishing a nascent Socialist State, and thereafter implementng its required structure.

Nevertheless, such questions cannot be left unaddressed. Not even a Revolution can switch Capitalism off, and at a atroke, institute Socialism as-a-readymade, well-understood alternative.

Indeed, originating from a Victorian slum, in Gorton, Manchester almost 80 years ago, I knew that you voted Labour from infancy, but what it then meant was the achievements in Nationalisation of the post-war Atlee-led government. And, the gains made seemed prodigious, and even the basis for a possible Socialist Society: but as history has shown, that was far from the actual case! All the wealth remained in the hands of the Owning Class, as did the Media of all kinds, and every possible hostile activity and undermining was brought into play, both within the country and from outside (due to the debts incurred in fighting the then recent War).


And, in spite of significant gains by the actions of that Labour Government, who was it that was then charged with implementing it for the benefit of the people? Literally all the doctors involved had been, and were still, opposed to the project, and continued to treat Working Class patients as they had done in the past.

My father, an ex-wartime fireman, died, aged 59, of a treatable illness, which was never diagnosed.  My maternal grandad died of pneumonia ONE DAY after being sent packing by his GP "as a malingerer". My mother, after two detached retinas, two years apart, was first made totally blind in one eye due to the failure of a new technique, and then lost the sight in the other due to exactly the same reason.

Now, the Tories lyingly blamed the NHS, as it indirectly infers now, at every possibile opportunity, for such tragedies, but it wasn't, and still isn't, true: it was the doctors who treated them, and their low opinion of their patients from the poor!

Oh, and by the way, I too have had very similar inadequate diagnoses and treatment, and have been chronically ill for almost 40 years, having to retire early after working with that disability for 14 years due to the results of a damaging operation.

Perhaps I digress, but my point is surely clear - Social Democracy is not enough! We got a committed Social Democratic government in 1945, but the economic power remained with the rich.

So, what are the implications for what we should do now?

The economic slump of 2008 did not only expose the inadequacies of Capitalism, but unleashed an almighty assault upon the Working Class to pay-the-bill, while, at the same time, attempting to remove every single gain remaining from the nationalisations and social programmes of the 1940s, and the achievements in living standards by the Working Class. 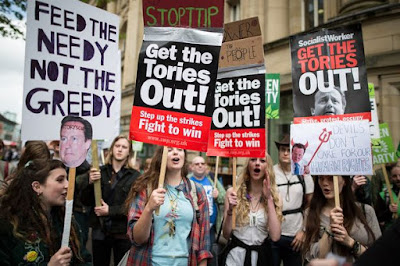 Today, I watched a "debate" between Peter Taafe of the Socialist Party and Michael Crick, a clear enemy of our class - proved throughout his contributions, which were a continuation of his attacks upon that organisation in three previous books, AND, in this "debate"the usual lies repeated heatedly and often, AND in spite of his anti-Labour stance, displaying a clear union with those still-present in the Labour Party of today, who had expelled them in the past.

NOTE: If you're wondering, the writer of this article was also expelled from the Labour Party too, but in 1964, having transformed the campaign in my city, in our electoral efforts to achieve a Labour Government, in which we succeeded! Peter Taafe's expulsion came 20 years later, after major successes for his grouping in Liverpool. By the way, Crick was also involved in "exposing" that "criminal insertion" into the Labour Party then too.

As an aside to this you don't invite agents of the enemy class to a debate, ever!

So, what has to be done? Finally, we get around to my main purpose in writing this essay, "What are the Key Questions now imperative for the Revolutionary Left to address?"

The first is obvious, but strangely absent.

Where are the necessarily constant Marxist Economic Updates, such as Professor Richard Wolff supplies both weekly and monthly on 80 radio stations across America and on YouTube?

Don't you think they are necessary?

Chunkymark isn't really a Marxist, but he finds it absolutely essential to deliver a daily YouTube rant against the Capitalist establishment. And, he is right!

For he's genuinely angry, and so should we be! Politics isn't measured argument: it is heart, anger and commitment, that strikes at the arrogance, greed and hatred of the enemy class - especially NOW! It is a rallying call for recruiting allies that will trust you, and when the time comes will remember.

And, where is the rest of Marxist Theory?

When I was a young Physics student, I joined the Communist Party after reading Lenin's Materialism and Empirio Criticism, as it correctly destroyed, philosophically, the Positivist position of physicists Henri Poincaré and Ernst Mach. Here was the answer to the Copenhagen Interpretation of Quantum Theory I was being force-fed in my University course.

But, I was mistaken: it wasn't the place.

Indeed, the number-one-priority, intellectually, for Marxists to tackle in Science was this crucial philosophical question. And, in spite of seeking that theory wherever I thought it might be, I didn't succeed.

The switch by Marx from Idealism to Materialism was precisely to unify Philosophy with Science, and he demonstrated how to do it in the volumes of his work, Das Kapital. It took him the rest of his life to complete it, and he fully expected his followers to complete the same sort-of-undertaking on Science. The books on Science by his colleague Frederick Engels, along with his own Mathematical Manuscripts proved his intentions.

It is over a century since Lenin's book, where are the vital following works?

The question was rhetorical, for I know the answer: I have had to do it myself, and like Marx I had to work many decades part-time and the last 10 years full-time to complete it.

And, there are other important omissions,which I will outline in Part II...