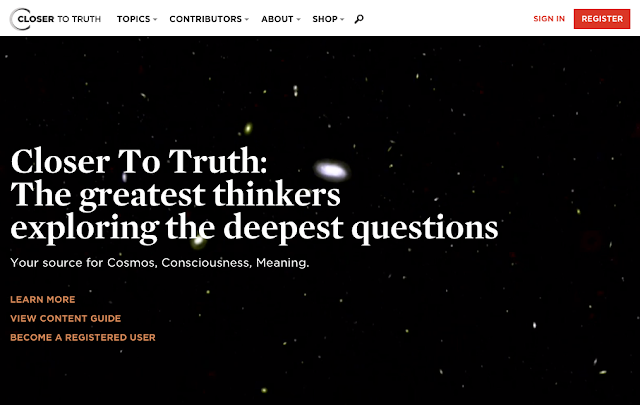 Desperate avalanche from the Right Masquerading as Seeking Truth


A large series of hour-long contributions, attempting to swing a bewildered people behind the old "solutions" under their Closer to Truth label, is everywhere on the usual Social Media sites.

I usually just ignore them, but when they imply that their overall stance is open and objective, by "considering" such a radical topic as Emergence, and then assembling a varied group of short interviews "from both sides" of the discussions upon this crucial topic, I just have to demur!

For, that isn't true!

The energetic proposers of Emergence as the true means whereby Creative and Innovative Development takes place, is principally by the Hegelians and the Marxists, but they don't get the chance to insert a single word in this "debate".

For, it is actually a carefully selected roster of usually pretty conservative academics, mostly opposers or distorters of that idea. And, NONE who deliver it as part of their developed philosophic stance.

As it is carefully and selectively erected, it is all the easier to demolish it! But, such a deceitful way of presenting it, cannot be tolerated by those who have long strived to understand its significance by swimming against the general consensus, in order to finally break through the containing enclosure of fabrications currently damagingly-restricting literally all serious intellectual disciplines upon this topic.

This contribution, in Season 3, Episode 10, of Closer to Truth, conforms exactly to my criticism: it cannot be a "debate", if both sides are not given an equal chance to put forward their main arguments.

"Closer to Truth" on Emergence


Of all the contributors, only one, Nobel Prize winner, Robert Laughlin, was able to state his supporting position upon Emergences, and he is NOT part of the coherent body of opinions on the matter, who are well to the left of Laughlin.

[Read A Different Universe by Robert B. Laughlin to get his full position]

Indeed, I am probably in the best position to comment, as I am the author of The Theory of Emergences (2010), along with many other serious and related contributions - all available for free thanks to SHAPE Journal.

The total absence of even a mention of the generally-assumed Principle of Plurality, also allows a discussion totally ignoring the "elephant in the room": for Plurality asserts that all Natural Laws are eternal, and cannot be influenced at all by any containing context. It therefore guarantees that when many are acting simultaneously, they merely sum, and hence can only produce complication, rather than-mutually affecting-one-another to deliver something entirely new.

And, when considering Systems of processes, Plurality again allows only complication and never ever real Emergences!

To totally omit even a mention, demonstrates a prior-and-blinkered agenda, just as the omission of the consistent Emergentists also does the same! Even the evident responding energies of the interviewer, betray where he stands, and picking Peter Atkins as a supporter of Reductionism was certainly not choosing a common stance upon that position. His views would generally be regarded as extreme (which the interviewer described as radical).

Emergence arose out of Hegel's criticism of Formal Logic, as illegitimately totally excluding any real Qualitative Change, and his added insistence that it was the essential component of Development.

So, when Hegel's Dialectics was transferred wholesale to a Materialist stance, such ideas led directly to attempts to explain the appearance of the totally New in Development, via a holist rather than a pluralist approach, and ultimately arrived at the Theory of Emergences, of which there was absolutely no mention in this programme, supposedly seriously addressing Emergences.

Finally, I cannot leave it there!

The study of Emergences can never be undertaken via Formal Logic, because it addresses precisely what Logic excludes.

Some types of Emergence happen all the time, as in the miraculous births of human babies, while others are one-off events that change everything, covering the Origin of Life, and the origin of Consciousness too.

Emergences are nearly always tumultuous events involving multiple Crises, but are also the only means by which the wholly New can successfully emerge.

In the Theory of Emergences, a seemingly permanent Stability starts to totter in a series of Crises, which then turn into a wholesale Collapse, plummeting down to a seemingly inevitable Nadir of Dissolutions, but then remarkably reversing into a halting, but wholly creative series of processes, culminating in a wholly new Level Stability.

And, such a trajectory makes the prediction of its outcome directly from its precursors, totally impossible.

Did anything of this come up in the delivered Episode 10?