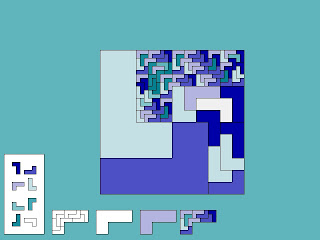 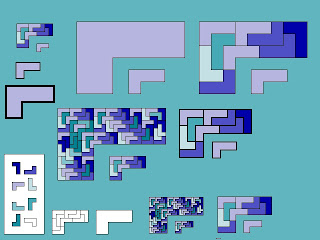 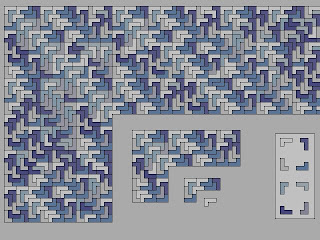 Some of my "Hierarchical Tessalations" - more to come including colour cycling animations that reveal form and a paper or two on what it's all about...
Posted by E Journal at 15:34 No comments:

Last night I had a dream...
I must have been thinking a great deal about the problem of holisitic, emergent change before I dozed off, because my dream 'solved' the problem in a very beautiful, purely filmic way.

No concepts were involved, no intellectualism - only a sequence of images in glorious technicolour. Entities, as areas of colour, were being changed into other entities, easily distinguished by their clearly evident changes in characterisitic hue. Things were constantly appearing and disappearing, but NOT according to any single mathematical rule. The happenings evidently depended on what entities were present, what they seemed to absorb, and what they produced. The ever-changing context seemed to be crucial in what the sequences of changes were. The most important feature seemed to be the creation of localities, which tended to have some sort of persistence. These appeared to be dependent upon certain preponderances of a particular type of entity. And within these localities the changes occurring were either small or involved sequences or cycles of processes and entities.

But, most interestingly, it was around the edges of the localities that the quickest tempo of changes occured. The best picture of what was happening was that it seemed like the Great Red Spot of Jupiter. Just as there, the spot itself seemed permanent, but involved cycles within it, whereas around the edge, things were happening much more dramatcially, and could either be sucked into the Spot or emanate from it. Other peripheral activities seemed to sail by with minimal interaction. Sometimes various appearances in the border region seem to accelerate away and from a different new locality. 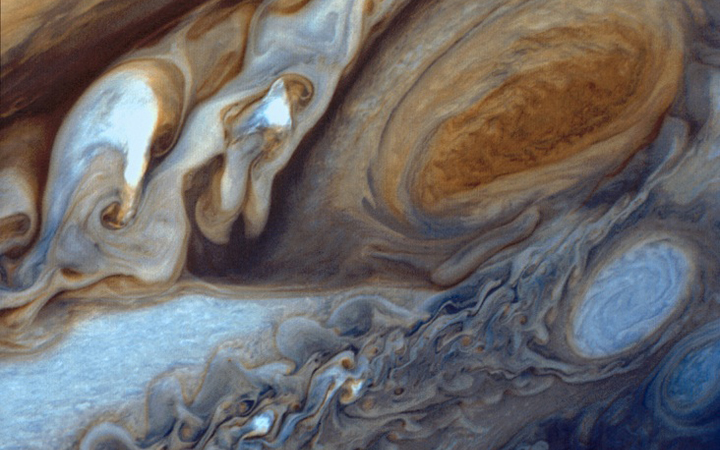 This dream was purely visual, but of breathtaking beauty. It reminded me of watching a rough sea on rocks. It implied incessant, constant cause, but infinite possibilities. The dream though was much more cogent and simplified. It was like an abstract symphony of form and colour.

On waking, my mind was filled with thoughts that imagined all sorts of significant events that had occured and precipitated an interlude of changes, before something else took hold and drove the patterns onwards. It was clear to me that the periferies of the relatively stable localities were special. Within the main localities, too much was constrained, while outside of every locality nothing seemed to be present for long. Colour succeeded colour in rapid succession. At the boundaries there certainly seemed to be a reliable provision of resources from within the locality, while elsewhere on this periphery the locality's edge was itself being fed by the absorption of passing entities. But while peripheral forms were being supplied from within the localities, they were also in immediate contact with the external churning void. When it came to a budding off, it was clear that the dependence on the parent locality was no longer necessary, and each offspring gathered around itself very similar peripheral streamings as were present around the main locality. The "Great Red Spot" was producing new entities which could then exist anywhere within the chaotic soup in the same way as the parent did.

Now, I am well aware that this was only a dream, but where do we start addressing the intractable problem of Emergent Changes?

Read the latest issue here
Posted by E Journal at 15:18 No comments: