These images are from a paper forthcoming to the Shape journal, as part of the "A Structure of Diagrams" series. Here diagrams and models were used to solve a complex three dimensional problem based on tessellation.

This case was to do with a self designed form which I had named the Soma Strand (after Piet Hein’s “Soma delicious Soma”).
Long before the tessellation problem outlined above, I had to design the original form. This, in itself, took a great deal of time and model making, but what finally emerged was an infinite strand, with a re-entrant form, and congruent, singly re-entrant hexagonal faces (with 90o and 270o angles only). It soon became clear (after making a bundle of these strands, that they definitely tessellated to fill three dimensional space completely.
Careful model-making had established this exciting property, but, it must be said that cardboard, glue and bits of wooden dowling (without which the strands were impossible to construct) are not the ideal materials to facilitate detailed studies in the area of volume filling stacking, particularly of such difficult (and indeed infinite) strands. Attempts at solving the problem using 3D graphics packages were soon abandoned, as these so-called tools, may deal with three dimensions, but are generally NOT designed for meaningful and revealing visualisations essential to the designer and creator of new things. You just couldn’t see what you were doing, and the figures soon became unintelligible. In addition to the complexity, that package had not helped me to adjust units effectively and lock them into the required precise positionings. Attempts at colouring to get some order out of the chaos only led to an obscuring of one part of the figure by another. I knew exactly what I wanted to do, but those facilities were simply not available.
As a last resort, I went all the way back to an ancient (and primitive) 2D drawing package that I had used for many years (De Luxe Paint 2).
Read More
Posted by E Journal at 14:22 No comments: 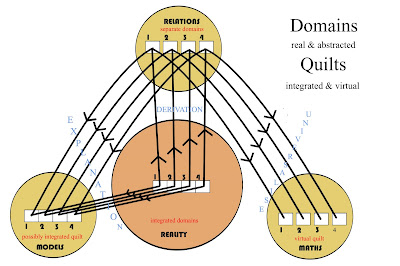 An early investigation of Man's Abstraction of Reality. See my final definitive Abstraction Diagram
Posted by E Journal at 16:32 1 comment:

The Superstructure and the Base

This philosophical area is a profoundly difficult, yet at the same time, an extremely crucial one.
It cannot be dealt with by a single paper, or even a series of them. It is about our fundamental assumptions concerning the World about us and our understanding of it. It inevitably therefore will display the unavoidable errors that will occur when one part of Reality (Mankind) attempts to explain either that all-embracing World, their own automatic origin, or finally their current place within that World. Clearly, no straight (or Royal) road to Knowledge can be viewable, or even available from within the continuing process itself. Indeed, Man has to promote himself outside of the process in the position of a God, in his attempts to address it. There is no way that the bulk of his attempts will be anything other than fictions and rationalisations. And from the exact same ground, any condemnations of Mankind’s errors in this area will involve a similarly arrogant super-promotion.
Such a trajectory was, and still is, unavoidable, and every gain made in this gigantic task will, of course, be partial and propped up with many formal inventions. How could it be otherwise?

But, that does not mean that Mankind should, “Give up now, you’ll never do it!”
On the contrary, it is the most important purpose ever generated by this evolving World.
So, any paper commencing the task of looking at our assumptions and methods will have to start somewhere, and wherever we choose will immediately and inevitable reveal contradictions. But, that is still the only way we can remedy our misconceptions and improve our attempts. What else can we do?

This author commenced writing about such questions some 14 years ago, under the title, Levels, and it is clear that the currently existing Universe is NOT a single monolithic structure. Not only is it spatially divided, but it has also generated a whole series of Levels of Existence, each with its own entities, properties, relations and even laws.
Life is just such a Level, as is Consciousness, and the real task will have to be addressing these innovatory changes of Level, as well as explaining the more mundane relations within particular Levels.

Nevertheless, we must make a start, and perhaps the best issue, which cannot but expose the essentials of such a World, must be that of The Superstructure and The Base. The main criticism of Marxism by its conservative opponents was that they could not even explain their own existence, never mind that of the rest of Reality.
So we will start there!

In this current period SHAPE is involved in publishing a series of papers addressing these and related issues. They include:-

The Second Law of Thermodynamics
Formalising the Heavens
Truly Natural Selection
The Superstructure and the Base
Order Out of Chaos
Paths to Chaos or Paths to Glory?

These papers were either purposely selected, or specially written, for this period in the establishment of SHAPE as a new kind of Journal.
It will NOT be re-hashing old ideas, but on the contrary making original contributions on all the questions that it addresses. It will, therefore, seek to represent the cutting edge of research, and though most of the early contributions will be from the pen of Jim Schofield, the whole idea is to generate a whole school of contributors keen to tackle these crucial questions.
Instead of playing the role of a conduit for the publishing of all and any papers on these issues, it is intended to deliver coherent, comprehensive and new contributions to a 21st century view of the World!
Posted by E Journal at 16:10 No comments: