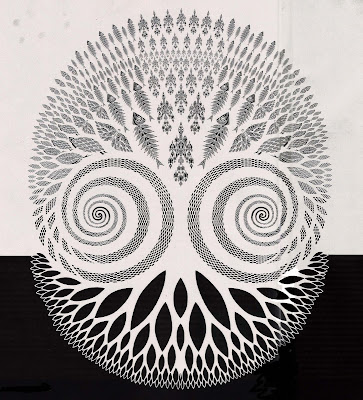 Turn here for Chaos!
The resplendent graphics along with the tables and graphs of Keith Bennett’s article in New Scientist (2782) promise a major revision of Darwin’s Natural Selection, and as that had been written as The Origin of Species 150 years ago, and as much has been discovered since then, you would certainly expect that many major additions and improvements, not to mention substantial revisions would have been discovered by now.
But Darwin’s Theory is hard to dismiss, not least because it is that rare yet essential factor in Science – a truly holistic theory. Instead of a straight forward encapsulation of carefully measured data into a deterministic equation, we have a set of ideas which explained how evolution happened – one you might call a real scientific theory as distinct from a merely abstracted relation. So, as someone involved in closely associated researches (The Theory of Emergence), I looked forward to more evidence to add to a raft of recent quality contributions (in the magazine), which certainly are pointing the way to important updates in Darwin’s Theory.
Yet, though this is a relatively short article, the first two thirds is concerned with his own and others current investigations (mostly on the fairly recent geological past in the glaciations and interglacials of the late Quaternary). His problem was that these dramatic and large-scale changes in the environment did not have the effects on Evolution, which Natural Selection would seem to infer. Yet, though these findings were certainly interesting, and correctly demand more than pure Natural Selection as the active processes involved, his extractions are, perhaps surprisingly, rewarded with the by now usual formal answers to all things inexplicable – Chaos!
Evidence of the impossibility of predicting (a key word in that view of Science) the future in Evolution, about which he is certainly correct, makes him proffer Non Linear Chaos as the engine for real, qualitative Change. He doesn’t deny the natural selection pressures on the phenotypes of individual organisms and hence on the genetic make up of those who will dominate the gene pool. But, he clearly promotes unpredictable changes as his primary factors in Evolution.
Now many would perhaps reply to such a position by saying that Random Mutations with totally unpredictable outcomes may be of themselves sufficient to deliver the same unpredictability. But, the irresistible momentum of current ideas on Chaos and Fractals at the present time seduces Bennett into making formal (mathematical) features as being those of central importance.
Now, the making of such choices are not unimportant. First, it does not remove Evolution from our usual ideas of determinism, it just makes the “disembodied drivers” non linear.
I’m afraid that is an easy get out!
Quoting the profound contributions of Stephen Jay Gould in Interrupted Evolution will not add credibility to Bennett’s thesis. Gould and others have stated that Evolution definitely occurs in rapid bursts, and not merely via the accumulation of small incremental changes until some threshold is passed, and a wholly new species is born.
Putting that down to Chaos is certainly not a progressive improvement, but a retrenchment compared with where Gould was heading.
It is, of course, the return to the ancient and ubiquitous, idealist strand in Science, which always wants to reveal “laws” – disembodied, formal relations, which “drive” Reality. The cosy home of Chaos and Fractals involves no new thinking at all! It is merely the latest answer to the ever-increasing evidence that a solely deterministic world is a simplifying myth. For, in this kind of mathematics, we have the marriage of formal deterministic equations (the absolutely essential ingredient in this kind of Science)) and unpredictability, which is increasingly evident in many aspects of Reality.
But Form is NOT Content!
It is only how we describe the patterns of things.
It is certainly NOT how we either understand or explain things.
I’m afraid this sound and indeed vital evidence is misunderstood, and matched to formal patterns in lieu of proper scientific explanations.
No, for all this evidence can indeed be accommodated, if we concede incremental change accumulation on a minor scale, but not leading to major redirections and true qualitative change. Indeed, what precipitates the latter is not progressive accumulation at all, but what Gould correctly saw as its very opposite. Major changes occur in relative rapid episodes termed Emergences, which are initially catastrophes for the prevailing status quo. They are the actual result of accumulation, but NOT of changes towards some “next stage”. They are the ever-present deleterious contributions, which have been recognised for very many years as the basis for the ubiquitous Second Law of Thermodynamics, which start by undermining the current stability, until they finally precipitate its wholesale dismantling. The New is NOT, as such, present within the content of the Old, “growing and ready to flower given a last push”. It is, on the contrary, wholly absent from any situation prior to an Emergence. The actual creation of the New can only occur in the aftermath of an avalanche of destructive change (like a Phoenix arising from the Flames), for such a cataclysm removes the processes, which ensured the stability of the prior Level.
All the evidence Bennett quotes is wholly consistent with such a trajectory of real qualitative change, To mix up micro (non revolutionary) changes with the real engine of Evolution is indeed a mistake, and to join the increasing chorus of applause for Chaos solves absolutely nothing.
Posted by E Journal at 15:32 No comments:

In the mid 1980s I wrote an article entitled The Demise of Formalism. It was about Mathematics and the work of contributors like Gödel and Turing, who had proved that Hilbert’s conception of the nature of Mathematics was incorrect, and it was neither complete nor coherent, or even entirely consistent, as he had asserted.
But that was then!

The content at that time only addressed the discipline of Mathematics and nothing beyond that. After a further 25 years since then many new ideas have been developed, which take the area involved well beyond Mathematics alone, and well into Philosophy in general. The most obvious extensions were, as you might imagine, in the ideas involved in Formal Logic, and, of course, then into all disciplines which use Formal Logic as their “banker technique”.
Even further it had become more and more clear that the techniques involved had very limited areas of application, and in particular excluded all disciplines which involved significant Qualitative Change, and most especially in those interludes in development which were covered by the revolutionary Events termed Emergences. To be able to tackle THE most essential areas of Reality just had to involve these crucial Events, for otherwise they would only be addressing entities and relations embedded in totally stable periods.

Science would then be limited to the study of what was possible within Stability. Ideas such as the Origin of Life on Earth as well as its subsequent Evolution would be left out of the areas for study, and it soon became clear that the development of Planet Earth itself, not to mention the Cosmos, were also evolving systems and had to have their Emergences too.

Now these Events are remarkable interludes involved concentrated avalanches of Change, and each one, on completion produces its own entirely New Level, containing entirely new entities, properties, relations and indeed processes. To make matters worse, it had also become clear that the methods universally used in the Sciences up to now were totally inadequate to such cataclysms of Change within Emergences. Indeed, the nature of any Emergence could NOT be derived from knowledge of prior conditions, no matter how full they were.
Nothing could be predicted from before the crucial Event that would pertain after the Event!

Now though these features seemed to make this an impossible area to study, such Emergences had been identified as such in the past, and the touchstone and template for such Revolutions had to be the First Appearance of Life on Earth. In addition, once recognised and described, these Events seemed to be cropping up everywhere, from interludes within the development of the Cosmos, to the emergence of Human Consciousness in Man.

By October 2007, the research of this author had reached the stage where another, much wider Demise of Formalism was necessary, and this is it! But what is included here was by no means the last word in this area, which by October 2009 had resulted in the publication (in SHAPE on-line Journal) of The Theory of Emergences.
This paper can be seen as the immediate precursor to that Theory, and as such, several important differences will be evident between the two.

P.S. As this is a long paper, it will be published in instalments over a series of Issues of SHAPE.
Posted by E Journal at 15:18 No comments: