New Special Issue on Nothing 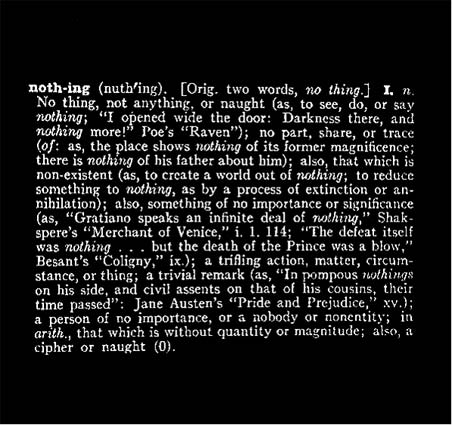 A whole series of magazine articles by prestigious authors and Special Issues by office hacks, as well as many different TV spectaculars and series have found it necessary to expand upon their increasingly important concept of... well... nothing.

In seeking an Origin for the Universe (without a God of course), they have settled upon "Nothing" as their necessary source. But, as you might have expected, it is a very special kind of Nothing!

First of all it is man-made. Or, to clarify, we both call it "Nothing" and have defined what we think Nothing actually is.

And, secondly, as you might have guessed, there isn't a single, unambiguous definiton. Indeed, the indubitable origin of the concept of Nothing is definitely mathematical, and associated with the mathematicians new concept of "zero" (as a number without any magnitude). It is a formal "nothing", like zero, but made up of +1 and -1, or equal amounts of positive and negative charges, or even completely balanced forces which give the appearance of zero activity, and, of course, many others of similar ilk.

Indeed my favourite has to be the Physical Singularity, where something supposedly vanishes by successive contractions, until it shrinks into the tiniest dot, and then down to absolutely Nothing. And, lo and behold, in reverse... we can have the whole of the present universe emanating from an identical dimensionless dot. Magic, isn't it?

This is not an unimportant philosophical speculation: it is indeed the current consensus position of the vast majority of today's physicists and cosmologists. And it is a direct consequence of two important principles, which were both progressive and extremely useful for many centuries. These were the Formalism of Mathematics and the Plurality of analyses of things into seperable parts.

Now, though gigantic pragmatic and technological strides were made using these principles, which it has to be admitted, transformed our world - they finally, and inevitably, began to lead us astray. When our tools no longer work, we should cast them aside and replace them with something better. For such has always been the way of Science!

It is never as easy as it sounds. Those who benefitted greatly from their past use of such priniciples, and indeed, made them the cornerstones of all their contributions and theories, would always and ever defend them to the last as their own prestige was surely based upon them. And, in their defence of these now reactionary principles, these supporters will favour the most remarkable retreats, rather than admit that they were wrong.

In 1927 a totally reactionary conception of Physics won the day against "old fashioned" Einstein and his supporters at the Solvay Conference, with what became known as the Copenhagen Interpretation of Quantum Theory - a pragmatist/idealist retreat of major proportions, that cast out "fuzzy" reality as the final arbiter, and replaced it with "driving essences", which were affirmed to be
equations.

The story of this debacle and how it must be defeated, has to be addressed, and Shape Journal is finally ready to begin this vital task. This Special Issue, under the title of "Nothing" is to start the process, to address this current preoccupation, for it has certainly redirected science into an impassable idealistic mire.

Tory Science: The Study of Failure as Success 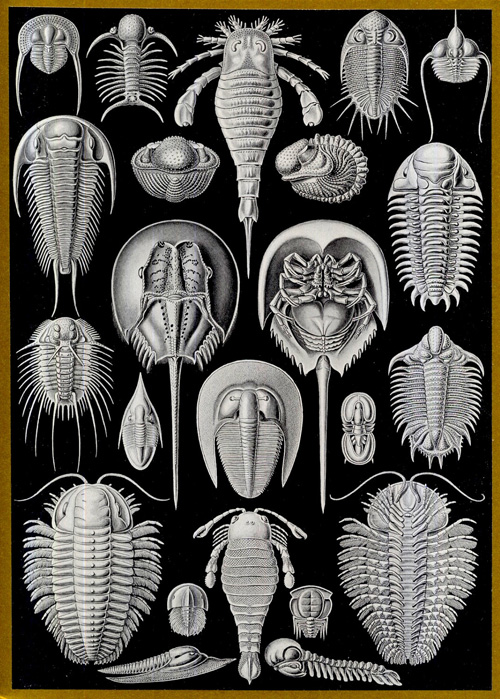 I awaited the new BBC television programme on Evolution (Survivors: Nature's Indestructible Creatures) with great interest. The oft-repeated trailers for the show emphasized the recurrence of major cataclysms within that process, which had, on every occasion, wiped out most of the current lifeforms on Earth, yet had always left a few very resilient survivors, and everything that still exists today must have evolved from these remnants. The very fact that catastrophes had played a part was, I thought, extremely significant in what they had precipitated, and the fact that the presenter (Prof. Richard Fortey) was from one of the very best museums in London, led me to expect a great deal of valuable extra information that would be available to add more substance to my recently published Theory of Emergence.

But, to my surprise, the globe-trotting expert did not allocate any evolutionary credit whatsoever to the Emergent Events triggered by those destructive cataclysms, but instead concentrated upon the unchanging "living fossils" that, with great difficulty, he was able to physically present as still living relatively unchanged to this very day.

At the end of a boring hour, looking at Horseshoe Crabs, Lampreys, Lancelets and Stromatolites, we got the bad news that this was to be a whole series of programmes. Good Grief!

So, instead of studying the crucial processes by which evolution had regularly rescued Life from wholesale mass destruction, our expert lauded the niche-surviving relics that hadn't had any revolutionary processes acting upon them for as many as 500 million years. What on earth was Fortey trying to prove?

Clearly, none of the freaks he presented to us were the reason for survival and development in general, or the vital accelerated adaptive changes involved - indeed, he was doing the exact opposite! His chosen "heroes" had survived by being extremely undemanding and resilient, and certainly not by being capable of rapid change in order to adapt and survive. Fortey even described with approval how a certain animal could go for an entire year without any food and still survive. How magnificent? I think not! Most organisms have survived by a mixture of maximal plastic variability and abundant reproduction coupled with certain individual deaths, not by living forever unchanged.

His examples were of where evolution failed to do its job and create new forms suited to radically changed environments, when faced with the most disadvantageous circumstances.

Now, such errors are perhaps understandable, but also unforgiveable! For though the incrementalist, quantitative changes idea of development does still dominate science, that doesn't change the fact that such a standpoint is wholly wrong. The engine of general survival was always adaptive radiation - those interludes following major disasters in which, from a single species, a whole range of different species arise in a relatively short space of time. The pinheads changes that we can see do not become changes in qualities: the incrementalist thesis is a myth.

All developments, not only in Life, but also in all circumstances, display two dominant modes. The first, and of longest duration, is undoubtedly Stability, when an integrated system has become established, not only by its advantageous virtues, but also by its integrated defensive processes. Once established such systems can persist for very long periods, in which the only significant changes are not towards increased order, but to its opposite, via imperceptible and inevitable decay - The Second Law of Thermodynamics doesn't actually rule, but its dissociations do mount up until the system becomes totally undermined, and a wholesale collapse ensues.

Now this is self-contained denouement, not that precipitated by externally caused catastrophe. But, either way, the immediate following period, which is the important part of the alternative mode, is always a short Event of major qualitative changes, which we term an Emergence.

For those who doubt that these Events actually occur, may I proffer a few important examples?
These are - The Origin of Life on Earth, the Advent of Consciousness and the Appearance of Directed Thinking. Complete overturns of what came before.

There can be no doubt, this alternation of long periods of incipient decline within a maintained Stability, and short, explosive interludes of revolutionary ferment and changes, is the pattern of all development. Now, if this is true, what must be the crucial area of study in order to explain innovation - true creative evolution? It can only be the detailed study of Emergences themselves.

But what does Professor Fortey do instead? He studies the failed remnants that have proved impervious to the creative processes of Evolution. He is lauding Conservativism. How can you talk about Evolution and not talk about progress and change?

By being a Tory?