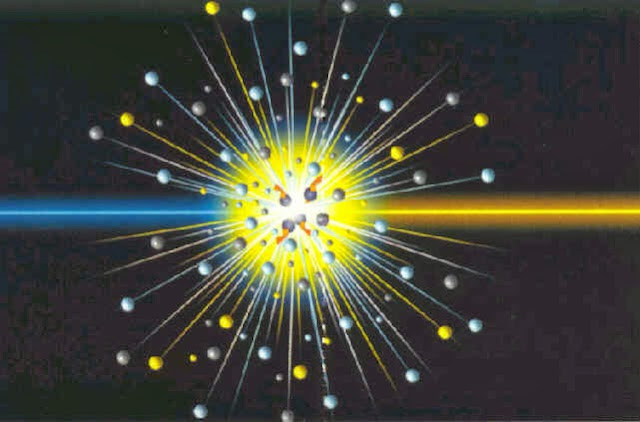 On the 1st of October SHAPE Journal will be publishing a new Issue for Physics Students, offering some alternatives to the current consensus position within the discipline... Watch this space!
Posted by E Journal at 21:14 No comments: 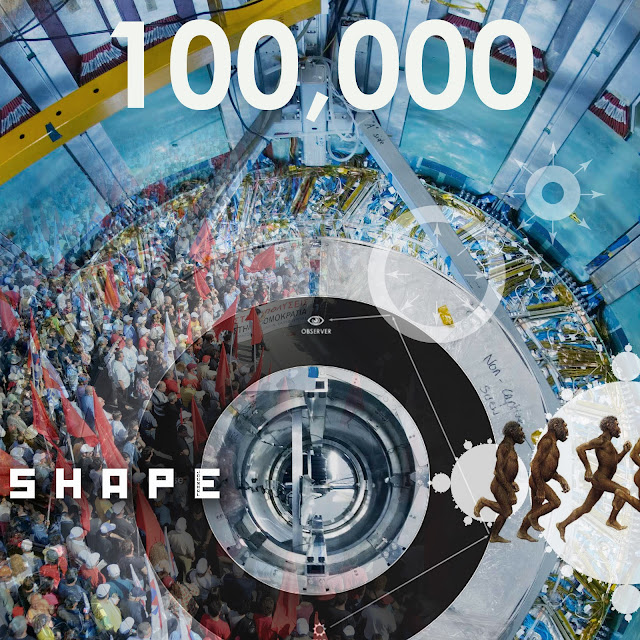 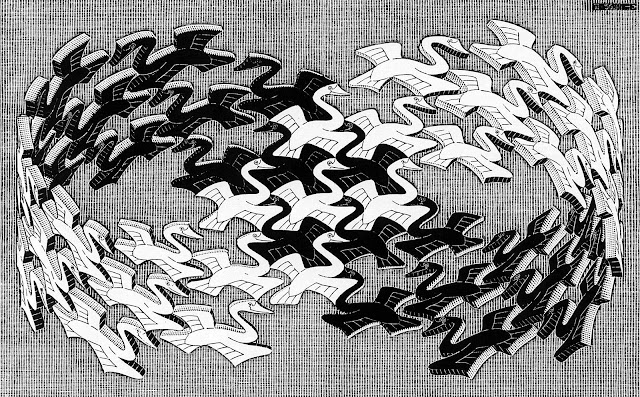 Not a Transcending Vision, but a Form-Only feature?

The problem with the idea of Infinity is that we quantify some measurable aspect of Reality, and then conceptually extend the possible numbers involved forever: we simultaneously make them infinite but reducing!

But, Reality doesn’t do that! We do!

And, in each such “area”, we assume there is a real aspect of Reality, and after being able to successfully use such locally, we immediately extend them well beyond such real-world limits.

We are intensely unhappy about any sudden terminations! But, we do know that at some point, we must set aside our extracted little piece of the World, or else the multiplicity of factors could overwhelm our attempts at control and use of such things. And, we do it by employing the idea of infinity.

For this, though in one sense, it goes on forever, in another all influences that we may be concerned with, will undoubtedly reduce – and in inverse proportion to that extension, until they are effectively negligible. Anything divided by infinity is zero!

So, at the same time, as making our feature of study both universal and eternal, we also have a pragmatic limit, and both of these are inherent in this concept of infinity.

The “awe and wonder” that Amanda Gefter describes in her article The Infinity Illusion, in New Scientist (2930), is when she (and us) turn this pragmatic frig into something real! But it is a handy trick!

All areas that we define are not infinite, but our basic approach to properties is that they never end (once you have such a thing it seems impossible to terminate it, and such Continuity with negligibility requires something like infinity to deliver practical and usable limits). 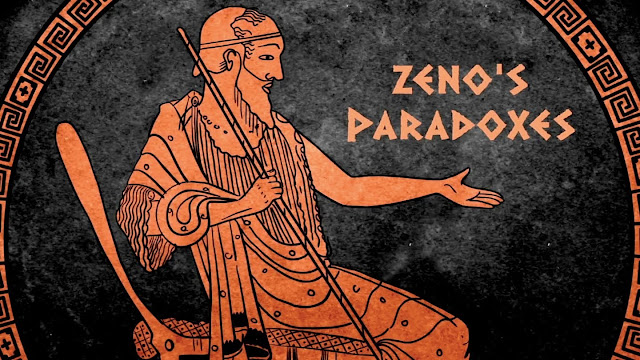 Long, long ago Zeno of Elea knew that both of our basic concepts of Continuity and Descreteness were actually “necessary, man-made constructs”, but no one would believe him!

Mankind had arrived at these two contradictory simplifications, and would merely switch from one to the other, in order to cope with different problems.

So, he composed a series of Paradoxes to show that these were NOT features of Reality itself, but our own constructs. And, via these carefully thought-out narratives he proved it! Yet, he didn’t, and couldn’t, replace them: he merely revealed their origins and limitations.

The two most interesting of his Paradoxes were Achilles and the Tortoise and The Arrow.

In the first he demonstrated how, by a particular way of considering things, Achilles could never catch the Tortoise, because an infinite sequence of steps would be necessary, and could not possibly end up with a very simple and small finite result. And, in the second Paradox, by yet another “indisputable” process showed that a fired Arrow could not possibly move through the air.

Yet, the constructs and simplifications shown to be paradoxical by Zeno are those by which we deal with Reality most of the time: it is just that neither are totally true, they are merely handy devices that work in many, many situations.

But, Amanda Gefter’s following short paragraph reveals why Mankind, like the Greeks when they ignored Zeno, still doesn’t understand what it constructs.

She says:- “Trouble is, once unleashed, these infinities are wild, unruly beasts. They blow up the equations with which physicists attempt to explain nature’s fundamentals. They obstruct a unified view of the forces that shape the Cosmos. Worst of all, they add infinities to the explosive mixture that made up the infant Universe, and they prevent us from making scientific predictions at all”

Now, I quote this in full, because within it are the assumptions that cause the problems. In fact, it is packed full of them! Can you extract them, or will you be satisfied with what seems (so far at least) to be her catchall culprit – Infinity?

The generated, important difficulties are deemed to boil down to a single question - “Can we do away with Infinity?”

Quite soon in the article, she arrives at Cantor, who concentrated upon handling infinities, but in attempting to fit them ever more tidily into a consistent, coherent and comprehensive Mathematics, elicited chaos among mathematicians [especially, Kroenecker, who in opposing Cantor insisted that only the counting numbers meant anything]

The following mentioned difficulties, encountered by physicists, were all put down to the sins of the concept of Infinity. But, of course, such a simplistic solution gets nowhere near why such concepts occur, and why we stick to them like glue.

Then we get the suggestion; “There’s something very basic that we’re assuming that is just wrong!” [A quote from Max Tegmark].

Well, yes! I cannot disagree with this statement!

But, it is not just Infinity! The following statement that - “Inflation will stretch spacetime only until something snaps!”, though itself full of assumptions, does at least suggest that real situations and their generated laws do in fact end, and are replaced with something else! Just banning infinity is no solution.

We have to fully understand both periods of Stability and their intervening episodes of Significant Qualitative Change: we have to see how the entirely New emerges.

And, of course, both the mathematicians and the physicists cannot do that! They have both become prisoners of their assumptions and consequent methods. It is amazing just how poor these people are as philosophers.

They “blinker” their way through the easy Stabilities, until they inevitably bang into totally inexplicable Emergences.

Another quote also has possibilities – “If infinity is such an essential part of Mathematics, the language we use to describe the world, how can we get rid of it?”

Again, this reveals another aspect – not only, “What is Mathematics?”, but also, “What relation does it have to Reality?”

In merely “describing” things, is it omitting something crucial?

Following this various suggestions are revealed, which seem to eliminate infinities in various mathematical forms, but what is not mentioned is how Mathematics always idealises relations, originally taken from Reality, but in carefully “farmed” situations, and then perfected or idealised to become independent of any particular context: they become purely formal truths!

Real aspects are purposely and directly isolated and then extracted, so as to be represented by totally general and formal equations, and this is the problem!

It is not infinity (as an isolated and added concept) that causes problems but the much deeper Principle of Plurality, which not only says that perfect forms can be extracted from Reality, but that as such they are both true and wholly separable – that is totally independent of any context in which they appear.

Now, this is very important indeed! 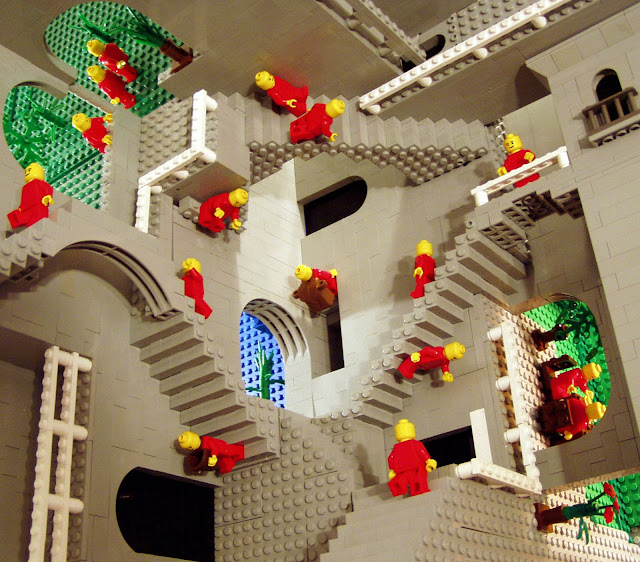 For various elements of Mathematics are without any doubt “idealised bricks” - kind of Mathematical Lego Units, from which everything is supposed to be constructed.

And just like a Lego-building-brick can be made into a Lego building - which is clearly NOT a real building - these are purely formal units, and are certainly NOT the building bricks of Reality. They are not even real! They are purified patterns, removed from the Reality which displays them. Indeed, just like a Lego Set can allow you to construct an unreal, but look-alike world, so Mathematics does the same with its own formal units. Yet what is constructed is never Reality, it is a purely formal construction in a parallel man-made, look-alike World of Pure Form alone – Ideality.

Some of the conclusions of the mathematicians, mentioned in Gefter’s article, prove conclusively that they are nowhere near addressing the real problems. For there is the claim that, “There is a largest number! Start at 1 and keep on counting, and eventually you will hit a number that you cannot exceed”, we are told.

NOTE: But, of course, they are wrong, for that counting of something real will always run out of things to count, as the idea of Number itself is a formalism, and in its realm – that of Ideality it can go on forever.

So, the error is evident - these people mix up the nature of the World of Pure Form alone, Mathematics, with the very different World of Reality. They are, as they must be, always doing their Mathematics entirely within Ideality, but because they see it as “Reality” they switch about, both importing situations from Reality into Ideality, and vice versa. Indeed, it is in the latter imports that by far the most damage is done!

The real problem is that what you are counting is never totally independent of its contexts, and will always, at some point, cease to continue to exist as such.

So, in Reality you are never in a situation that continues forever exactly the same, and extends infinitely, and hence would allow an infinite count. Yet, of course, in Ideality, without the constraints of the Real World, you could indeed, go on forever.

We exit to that perfect World as soon as we can so that we can manipulate and develop features in a simplified and constant environment. Indeed, all extractions from experiment in the Real World are here funnelled down into a smaller number of Formal Types – the very same equations can be derived for a number of totally unconnected phenomena that display the same form when “given the necessary treatment”!

In the Real World, you could indeed count neurons within a living organism until every last one had been included, but what matters is not analysable meaningfully, purely in terms of those units anyway. It is in their organisation that the wholly new emerges.

In any area, if you are to traverse the limits you have to leave Ideality, and study Reality itself.

At best it can deliver only forms, which, for a while pertain, but such are, even then, still only formal descriptions.

The excuses for this new Mathematics are even more ridiculous. Instead of depending upon Ideality – the World of Pure Form alone, they fall back upon a machine – the computer, which will certainly always have a biggest number simply due to the limits of its construction

Needless-to-say, we end up, once again, with the quantum as the answer to everything.

“Why don’t we just accept what Quantum Mechanics is telling us, rather than imposing our prejudices upon the Universe?”

Wow! And if you think that is a bit rich, how about – “Our conception of et Theory represents the discovery of a truth that is far beyond the physical Universe”.

Well, yes it is: but it is still only in the World of Pure Form alone! Haven’t they heard of the calamities found by Bertrand Russell, concerned with Set Theory and the debilitating limitations established by Gödel and Turing?

So, does this article tackle the real problems?

None of the arguing sides included in it even understand the problems. It reminds me of the fight at Solvay in 1927, when Bohr and Heisenberg defeated Einstein, and instituted the, still continuing, dominance of the Copenhagen Interpretation of Quantum Theory in Sub Atomic Physics. Any criticisms of this take one side or the other, but they were both wrong! Even Einstein put mathematical form at the very basis of Reality, and in spite of the battle over Sub Atomic Physics, NO solution was possible because both sides were constrained by the same incorrect assumptions about the primacy of Form.

At best they could only agree to differ!