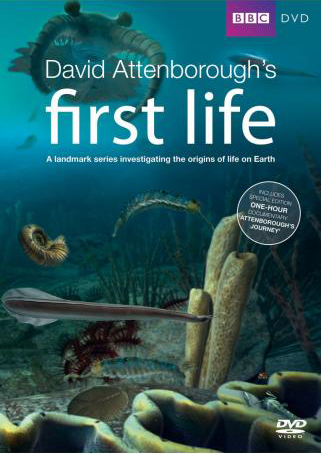 In David Attenborough’s new series on BBC TV, he considers the trajectory of Life from just after its Origin onwards. He, so far at least, doesn’t get involved with the so-called pre-requisites for Life, nor the most difficult of all questions – the actual Process of Origin, but he does address the almost incomprehensible tempo of development in Early Life.
He initially starts by standing in Charnwood Forest (near Leicester in England) where he points out a very early fossil, discovered by a pupil from his own school (at which I taught for a while). Indeed, it is perhaps the most famous – Charnia (named after where it was found). But the age of such very early fossils was only somewhat less than 600 million years old (from the Pre Cambrian geological era), and he goes on to reveal the discovery of fossils as old as over 3 billion years that have since been revealed. Yet the crucial question about this early phase in the evolution of Life has to be “Why did it take so long (around 3 billion years) to get from these early, but indisputable glimmerings of Life to Charnia?”

Sadly, though, just as you’re getting interested, he goes on to repeat the current NASA-led prejudice, which insists that the location of the very First Life on Earth was at the Black Smoker emissions in the depths of the major oceans. [A position considered absolutely necessary by NASA for it to continue to get its required prodigious funding. Their argument being “If life could begin on Earth in seemingly impossible places, it might also be found in similarly impossible places in Space, so give us the funding we required to find it!]

Though he doesn’t say it, Attenborough infers that the reason for the deadly-slow early tempo of Life, was the prodigious isolation of the Black Smokers in the depths of the oceans from the required highly conducive areas for the rest of its development. It may have started there, but to develop further it had to get away to better conditions.

But, we aren’t funded by the US government (as is NASA), and we don’t have to take up such a position.

Let us assume the much more likely location for the Origin of Life on Earth – NOT in those dark, pools amid a totally hostile and vastly extended context, but in highly conducive, rich and varying circumstance bathed in the light and heat of the sun, and with world-wide surface currents and quickly moving atmosphere to transport all sorts of different components into an ever changing mix. I’m sorry, but I am amazed at the current consensus on this important question! Don’t these non-experts know that the consensus is always wrong, and is generally created and propagated by those with a vested interest, and the resources to publicise it?

Now, the same vast delay would still have to be explained, but not so easily using the pigeon-holes provided by NASA, and then shelved!

Why would the first Life not immediately diversify?

To really address such a question, we would have to tackle it from the exact opposite end!

Why did Life later on diversify and multiply at ever more accelerated rates? And why did certain forms remain almost unchanged for hundreds of millions of years? And exactly how did the clearly necessary conditions for both these cases actually occur? The question turns out to be a philosophically basic one about Stability and Change. The generally accepted prejudice about such things is that once the impossibility of something has been breached, and the impossible has actually appeared, it will accelerate away in multiple directions. It will accelerate away, but NOT in multiple directions.

It will proliferate in a SINGLE direction!

Nothing persists, no matter how often it appears, unless it is part of a system, which prevents other changes. The New has to become part of a system, which actively maintains itself by acting against all further (and threateningly rival) developments, even if they could be “better”! The norm is that Stability is always very highly conservative, and once established will inhibit, devour or destroy any further, similar forms of change to itself. Indeed, qualitative change is rare, and can only succeed if the currently prevailing stability becomes totally compromised, and a cataclysmic dissociation dismantles ALL its defensive maintaining and inhibitory processes.

You need a calamity to precipitate “real change”

NOTE: Now, before we go any further, we should consider the situation of First Life!
It would NOT be part of any system, when it first occurred, and it would certainly fail! Indeed, many different potentially first Life entities would appear and disappear even in highly conducive circumstances. But, there would be significant changes. A few mutually conducive processes – both living and non living could come together and co-operate as a mini-system, and as such would begin to proliferate at the expense of other less conducive or even mutually contending! Only when a set of processes persisted could we signal the actual beginning of Life.
But it would NOT generate a variety of different forms. On the contrary, its success would depend in its inhibition of such occurrences. The First would proliferate as a SINGLR form, to a vast extent, and everywhere prohibiting further alternative “successes”.
Indeed, as with the much later Stromatolites the norm would always be this vast single-form proliferation. In the case of these Stromatolites, it was worldwide and sufficient to actually change the composition of the Earth’s atmosphere, with a vast increase in free Oxygen, in spite of its high reactiveness.

Now returning to our point about the necessity of calamity to cause significant qualitative change. This is embodied in the Second Law of Thermodynamics (Rust never sleeps!), which makes deterioration the most ubiquitous tendency in Reality. Now, even that powerful tendency can be kept at bay, for long periods, but never finally defeated!

Now, the usual optimistic idea of development is that small, incremental improvements can accumulate until a progressive revolution is precipitated, which leads to significant qualitative change.

But that is a hope-filled Myth! The only guaranteed cumulative processes are those towards dissolution, and even without any externally-caused calamity, a given stability will, in the end, fall apart, and an avalanche of dissolutory change will carry the situation towards a total loss of any kind of Form – indeed, towards Random Chaos! But, such a calamity turns out to be the ONLY possible situation in which significant wholly-new changes can begin to occur. And this is because the defensive and attacking processes of the prior stability have been removed!

NOW, anything can happen!

All sorts of conducive processes, which reinforce one another will now be selected as against contending ones, and without the policing processes of the prior stability, and will proliferate.

Though the more successful they are, the more the dissolutory processes will again grow to dismantle them. It looks as though all will fail! But, though the overall situation does indeed seesaw between progressive construction and dissolution, a very remarkable alliance is possible. Certain dissolutory processes can turn out to be advantageous to a developing proto-system, for they could benefit from the system for their own required resources. They can emerge as the policemen of the proto-system, and the seesaw changes are nevertheless generally upwards.

At a certain point the proto-system can become established and persist! A new continuing stability or Level has occurred full of wholly new things. But surprisingly its continued existence is, in the last analysis, down to its own defending dissolutory processes aimed specifically at all which are NOT of that system. The revolution only succeeds by being opposed to further change It stops all further qualitative change! Things grind to a halt in innovative terms. Indeed, such systems can proliferate quantitatively, and “take over the World”, but do not allow further or general significant qualitative change.

These revolutionary Events are, of course, Emergences, and the new regimes, which they establish are termed Emergent Levels. Life is just such a Level. The conundrum of why Life doesn’t keep reappearing from non-living situations is thus explained. It is prevented by already existing Life.
Posted by E Journal at 20:06 No comments:

I have contributed an article on class to my son's blog, The Red Eye Portal.
Click here if you are interested in reading it.
Posted by E Journal at 19:21 No comments: