Paths to Chaos or Paths to Glory: Introduction 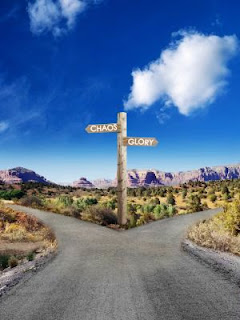 What is the natural trajectory of change in Reality? Do we, in accordance with the Second Law of Thermodynamics, consider it to be a constant downhill descent into oblivion, or is it "built-in" that it should naturally evolve into ever-more potential-filled and richer forms? Now, for highly constrained subsets of reality, the answer is clear. They will indeed, if left to themselves, deteriorate into chaos. But what of unfettered reality as a whole, with no imposed constraints and added purposes, what will be the natural outcome there? The evidence is all around us. It will evolve!
But why does this remarkable second case happen? What is the engine of such developments, and what determines the trajectory of that process?

In order to address these questions this paper attempts to address reality as it is, without Mankind! But to do so, we must bury our usual methodology, which sees every discovery in terms of how we can exploit it for our own ends. We must instead become observers and interpreters, and never users. We must develop what we are clearly already aware of, but rarely pursue - disinterested Science.
The evidence for the evolution of Reality is undoubtedly legion, but as to what factors drive this development, we do not know. The tempo of such changes when measured with our 'clocks' seems to be zero - that reality is entirely stationary and unchanging.

Now a single tiny and isolated particle of Matter in a completely empty space cannot display, or even have, any properties at all. We have to realise that such things can only appear in aggregates. It is only when many such fragments come together that we not only get bigger pieces, but also qualities begin to be evident: the fragments relate to one another. And these qualities will be different at every stage of the enlarging aggregate. They will not only change in magnitude, but also in properties. Initially, then the property of Gravity - the mutual attraction of particles of Matter for each other, must be the initial drive. But notice, we could extrapolate all the way from the very first tiny aggregations seamlessly to a single all-consuming Black Hole into which the whole Universe could be unremittingly drawn, to vanish completely back up its own Physical Singularity! That is the simplest extrapolation of Gravity. But, of course, we know better. Vast aggregations collapse Matter into ever closer forms, until in the largest aggregations they burst into stars. Millennia of studying the Heavens have revealed a whole series of different forms of stars which clearly form a sequence of phases, and even include cataclysms such as Supernovae.

Clearly, apart from the observable evidence in the sky, there is a more complex and detailed trajectory involving many other modes or phases. And what is crucial about these phases is that they change the game. These natural developments transform their own producing ground every single time! So how do such a variety of very different and indeed new forms get driven into existence merely by Gravity?
Now, one aspect of the forms involved is also crucial. There seems to be an alternation between long periods of relatively slow-moving stability, and very short interludes of radical change. Such a trajectory implies that other forces are also being generated, and grow to such a point that they always undermine, and then overthrow, the current stability, only to, at a later time, surrender to their own, different, stability-enforcing system, thus moving into a new period of stability.
If we had a mechanist, purely bottom-up Universe, such things could never happen! This evidence seems to suggest that Reality is NOT pluralistic (the bottom-up approach), but is, on the contrary, entirely holistic, involving causalities in all directions. This means that the possibilities are increased, because the ground is always changed by its own products. As soon as a product (such as free Oxygen in the Earth's atmosphere) is produced in sufficient quantities, it changes future possibilities into features that were impossible previously.
Elements of such a view are already occurring in our thinking about the world, but they are swamped by the stamp of our own purposes for USE!
This series will continue in Issue 11 of the Shape Journal. Watch this space. 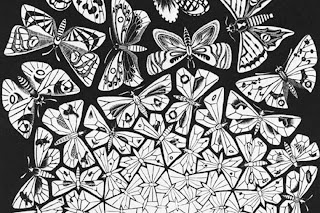 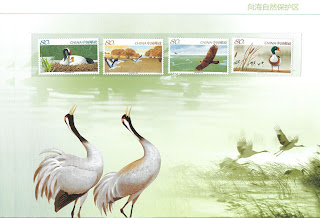 Not sure if any of my regular readers will be interested, but thought I'd mention it anyway!
I'm currently trying to sell my large collection of Chinese Stamps
Visit www.chinese-stamps.com to find out more