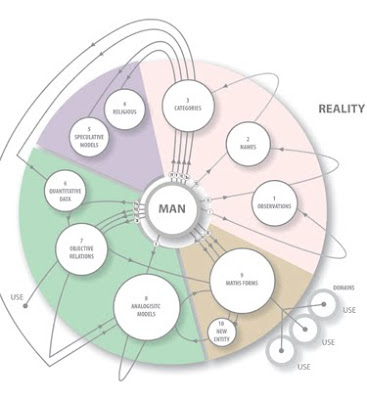 The video below explains the diagram above

1.These are Philosophical Diagrams, developed by this author to aid in the communication of complex ideas, and because of this he is ideally placed to explain them.

2.They are not mere illustrations of ideas in an alternative form, but were designed as essential tools as part of a polemic against the current philosophical consensus in his area of study – Science.

3.Because they deal with Philosophy, it has been necessary to deliver, both in words and diagrams, means, which show relationships, and whereas the overwhelming tendency in this area has been to do this solely by means of Equations, a wider and better means was required.

4.The process commenced with attempts to deliver the Processes and Productions of Abstraction, and here the whole trajectory of that effort is delivered.

5.Crucially, such diagrams would have to deal with both the USE of abstractions, and their crucial role in EXPLANATION.

6.This had to be a new kind of diagram, and as this paper shows, went through a whole series of forms until an adequate solution was found. It had to include both Processes (usually as “arrowed lines”) and Products (presented as labelled circular areas)

7.The main aim of these diagrams was to identify the different processes & productions associated with Science, on the one hand, and Mathematics, on the other. It was clear from the outset that these were very different and definitely separate.

8.The basis of everything illustrated has to be Reality, as the source & confirmation of all the associated abstractions. From this starting point all conceptions had to flow and be validated by frequent returns to this primary source.

9.Categories such as Objective Relations, Models and Equations had to be related, as did processes such as The Scientific Method for confirmation, extension or rejection of the Models.

10.A clear split between Explanatory Models and purely Formal Models was evident, and the process had begun. But the first effort was clearly not good enough because it delivered only what was already known.

11.The next stage attempted to deal with repeated use of the abstraction processes, and how these allowed more general (on the one hand) and more universal (on the other) extractions from evidence in Reality. Interestingly, the term Coherence was shown to be different in Explanation from its role in universal Equations.

12.Further diagrams separated out the Scientific Method and the crucial process, which I have termed Mathematical Speculation, which centres most developments on Equations as source rather than Reality.

13.Finally, I present the culmination of these studies with a diagram in which the ground of everything – the background of the diagram, is Reality. And MAN is positioned at the centre as the source of all processes. Between that thinking initiator and Reality is a ring containing all Productions (abstractions), and between Man and these Productions via Reality are the actual Processes.

14.The success of these diagrams was not a formal solution to a problem of representation, but HOW the diagram can be used in tracing what people are doing with their thinking and arguments.

Read more
Posted by E Journal at 13:10 No comments: