Idealising Shape to Deal with Reality

An important question when attempting to effectively bend aspects of Reality to our own needs, occurs in how we effectively deal with a real entity's Form or Shape.

In the Natural World almost nothing is of a simple shape (even things that appear to be perfect spheres, such as moons and planets are only approximately of that form upon closer inspection).

Nevertheless, we do notice that their relations to the vertical and horizontal are clearly significant - so a rectangular brick sits stably upon horizontal ground on Earth, while a falling raindrop, having NO prevailing contact with anything else, appears naturally spherical in shape.

So, we are indeed aware of certain Ideal Shapes, and attempt to, wherever possible, consider natural things as somehow "made-up" of such Forms, primarily to make them easier to deal with - particularly in estimating numbers or amounts of certain components. Indeed, a field may be assumed to be approximately circular or rectangular, or even made up of a series of triangles.

And various properties of certain shapes can also be applied to things that relate to those shapes.

We even suppose that messy Reality, given perfect conditions, would naturally BE in those Shapes: they are considered to be the basic ideal, and component Forms of Everything!

Now, the detailed-and-relational study of those Ideal Forms was indeed comprehensively undertaken, but required a very different kind of simplifying-basal-abstraction to then be applicable to ALL Forms, and their inter-relationships.

For example, to deal with precise Positions (essential for all forms), a Point of zero extension was necessary - delivering a disembodied, but useful, Position. And, linear connections between such Points were also considered as being of Lines of zero thickness - disembodied Lines! 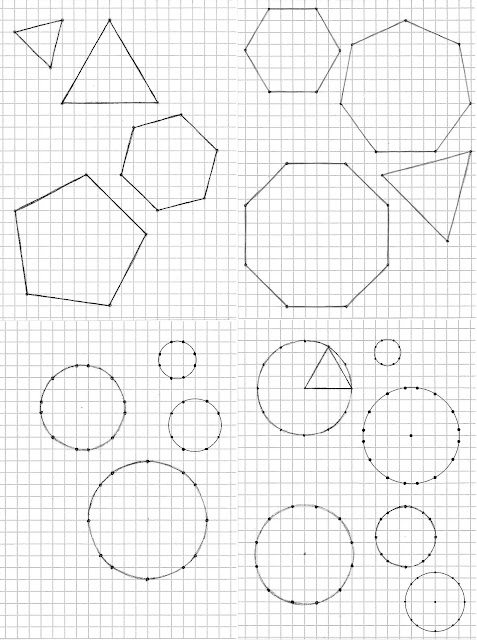 And, out of this wholly new Method of Simplifying-basal-Abstraction, a whole set of consistent inter-relationships proved to be possible. A New and powerful Discipline had been invented based upon this special form of abstraction. It didn't exist, as such, in concrete Reality, but delivered, nevertheless, both an idealised-and-relateable Reflection of Reality: and that greatly empowered Mankind, in using the things-involved to some intended purpose.

BUT, it did have a very grave flaw!

Unlike the concrete Reality these forms reflected, all its necessary-elements, and their inter-relationships were eternally fixed.

For they constituted Mathematics, which was a coherent-and-consistent, manipulative Discipline, about permanently qualitatively unchanging things: it conformed to the Principle of Plurality, which set all of these things and their properties in stone forever.

Now, it also could relate to Reality - BUT only if, reality itself was held perfectly still! In other words, it was a reasonable approximation to natural or artificially-achieved Stabilities, and nothing else.

But, totally-unconstrained and natural, concrete Reality obeyed a very different regime - that defined by the opposing Principle of Holism! And, that not only fully allowed qualitative change: it was indeed its motive force - the reason for its Natural Development and the unpredictable appearances of the Wholly New.

The Formal Logic implied by Plurality, was crucially different to the Dialectical Logic implied by Holism. And, here's the rub: the formal, pluralist Logic of Mathematics was immediately transferred, wholesale, and exactly-as-is, to Reasoning in general, so the lauded Formal Logic could NEVER deal with Qualitative Change: real Evolutionary Development was totally beyond it.

And, perhaps even more important, Pluralist Formal Logic, and its source, Mathematics, were both uncritically applied to Science too, as it also had emerged from the same Greek Intellectual Revolution Interlude. Indeed, a very particular Experimental Method just had to be invented, to take account of the Flaws imposed by the now established approach - for unfettered Reality would NEVER behave in conformity to the underlying premises of that approach.

But, Mankind already knew "what-to-do": they had been making things work pragmatically for many millennia, and the Neolithic Revolution had also taught them a new lesson - to rigorously control or farm a given situation, to make it perform better. So, they simplified, filtered and held still the Experimental situation, until their targeted relation became clearly displayed, and which they then extracted via a series of measurements over a given range.

And, as long as future use was limited to exactly those very same conditions, their extracted relation would hold, and a required outcome could be achieved.

But, applied in any other conditions it would always totally FAIL!

Clearly, an Artificial Stability had been constructed, in order to make the situation pluralistic, so that the pluralistically-acquired Law could be used. But, it was never the General Law that they assumed it was. For, they had assumed Plurality was natural. and was the same everywhere: and that it was just the confusing presence of other Laws that had caused the failures.

It was, in fact, the modifying presence of other factors, which actually changed the Law being used -giving NOT a mere sum, over all the laws present, but a qualitative change in the said law, inflicted upon it by the other laws.

Laws are NOT eternal, but always determined by Context.

And, that isn't all that is involved, in the usual Pluralist methods in Science!

We also have the further distortion of even that flawed relation, when considered a supposedly General Relation from Mathematics, is fitted-up to the measured Data. For, this final processing into an Equation, also unavoidably imports Idealisation into that final version too.

Science is completely comprised of these idealisations and formalisations of reality - how does this skew our view?


Galloway launches new party, worth watching and wait for the working class poet, Chris McGlade, towards the end...
Posted by E Journal at 15:40 No comments: