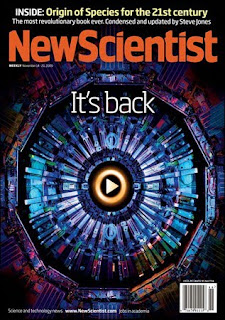 "...On reading the current issue [Eureka Magazine, The Times, Nov 5 2009] from cover to cover, I was surprised to find that really nothing new was presented there at all. It reminded me of New Scientist, but whereas that journal is aimed at “scientists” (supposedly), this one is certainly aimed at the “interested layman” in mind instead. And one of the characteristics of such disseminations is that they are totally subservient to the “experts”.
No longer do we have hostile antagonisms by arts-types and other non-believers, but in the new attitude of embracing Science in all its current glory, all the participants merely swell the ranks of the consensus merchants, who “wonder” at the might and power of Big Science as propagated by its producers. This removes that absolutely vital criticism which Science has always needed to continue to progress, and which is now, more than ever absolutely essential, as its ageing philosophy and consequent methodology becomes increasingly inadequate to cope with the major unanswered questions that are daily arriving at the top of every agenda..."
Read the rest of this article
Posted by E Journal at 16:36