YOU are paying for THEIR mistakes 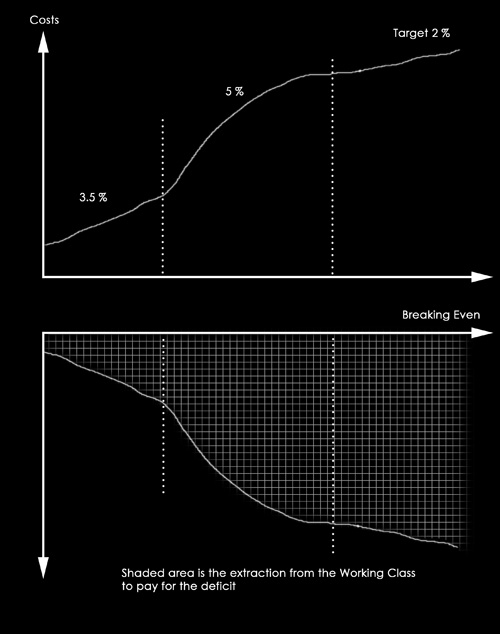 On listening to the Press Conference given today (08/08/2012) by the Governor of the Bank of England - though quite a bit could be extracted from his report and forecasts, as well as from his answers to the many questions of his audience - the overall impression of the occasion was that of an officer's conference on the Titanic, as it settled ever lower in the water, with the primary objective of apportioning blame. For no one had any real idea of how things were developing, including the Governor himself, and he admitted as much.

[It may also interest you to know that, at about the same time as this Press Conference, the Prime Minister was entertaining himself watching the Women’s Boxing from a ringside seat at the Olympic Games.]

It was clear that the whole basis for the Governor’s analysis and suggestions was an unswerving acceptance of the prevailing Capitalist Economic System. Absolutely NO alternative was possible! This is the way that it is, and all that could be done to pull us out of the recession had been done, and was still being done, carried out and swapped around, or merely repeated (in hope) when it quite evidently isn’t working!

One single question from the audience was significant both in it actually being asked, and in the answer that it received from the Governor.

He was asked if he could not stop giving money to the Banks, and put impetus into household spending by giving money directly to the people at large.

He almost had a fit!

His answer was unequivocal – You can’t do that!

But exactly why it couldn’t be done was not admitted.

Clearly, someone had to pay for the financial crisis, and this was how they were doing it – in fact there was NO OTHER WAY!

Yet in spite of the gloss that the Governor was insistent that he put on the Economic situation, the basic indicators, which he clearly revealed, could be addressed in a very different way from what was the agreed consensus in this gathering. And these crucial indicators are:

The Rate of Inflation - what we pay out compared with before

It is always described as if the Rate of Inflation coming down was making things better for everybody. What utter nonsense that is!

We were told, in a serious straight-faced way, that we should take comfort in that the slippery slope to oblivion was becoming less steep. But of course it was still going DOWN!

Only a negative Rate of Inflation would do that, or a Rate of Wage rises above that of Inflation!

Let us be absolutely clear.

When the Rate of Inflation went up to 5%, it meant that things were costing 5% more than a year ago, and over the period that it remained at that level, the increase in costs was still going up by that rate.

If over a series of months, a year earlier it had being going up at:

it was now actually going up by:

Yet we were supposed to take comfort in any decline in this rate. But we must not ignore what was also being inflicted upon the Rate of Wage Rises, these were either stopped completely - so that they were 0%, or alternatively kept at a very low figure. We were getting lttle or nothing to match the increases in the costs of everything.

Every wage earner was getting poorer. For when the Rate of Inflation declined from 5% it was still positive, and the restrictions on Wages remained, so it continued, all the time, day-by-day, they were able to buy less and less with their earnings.

But to get back to what the differential from a year ago would be if the Rate of Inflation changed into a negative – cost would have to reduce across the board, and that was certainly not happening.

Now, you might expect (as Cameron insists) that everybody was getting significantly poorer over this interlude, but that was NOT the case. To redress their losses, the Banks started wholesale cheating of their customers with Payment Protection Insurance, the illegal fixing of the LIBOR Rate, and the mis-selling of systems to small businesses supposedly to protect them against interest rate changes. Almighty tricks were necessary to protect their profits and their shareholders dividends.

In fact the gap between the Rich and the Poor is getting ever wider and in many significant cases company Profits are still enormous.

In addition, large numbers of people were being made redundant, and with a continuing range of such sackings still in the pipeline. And these people are therefore MUCH worse off than those still in employment. And as they are not receiving wages, they will not figure in the published Rate of Wage increases, for if they did the result would most certainly be an average Negative Rate – wages over all the working class: it would be GOING DOWN!

The way we are given the so-called indices of the economic State of the Nation is a set of premeditated LIES.

It can only be that the solution to the crisis can only be to make the Working Class PAY! They will be forced into a poorer state continually – over a period of years. Certainly NOT a one-off loss (as is inferred) at all, but, on the contrary, a rate of getting poorer every day by around 3% over a year. And the unemployed will be poorer at an even greater rate!

So, as the Governor stated, it will take a long time to get enough from the Working Class to “foot the bill” produced by the Banks and the speculators.

And a true graph of purchase-ability by the Working Class will show a long period of getting less and less from the money they have earned.

Can you stomach this theft?
Posted by E Journal at 15:20