There are problems with a spinning electron!

We can treat it as something like an orbit – delivering thereby a magnetic effect perpendicular to the spin-plane (in other words along its axis of spin), but this would either involve an asymmetric positioning of the charge, or its even distribution throughout the volume of the entity, or, thirdly, the move-ability within that volume, so that, due to mutual repulsions, would situate the distributed charge on the surface only.

And, at the present time the indivisibility of the “unit charge” is considered unimpeachable, so these are not considered as at all possible. There is a fourth possibility, and that is that the electron of a joint particle made up of two components – a larger neutral component, relatively stationary with a smaller negatively charged component orbiting around it. Such a system would have to involve another force pulling the electron towards the central component, which doesn’t seem to exist.

Now, these seem to exhaust the possibilities, which might gallow the electron to have a classical spin, with its predictable effects. But, in addition, the quality that the electron does seem to possess, which is called its “spin”, is most certainly NOT classical spin, but something else. Nevertheless, this doesn’t seem to stop theorists allocating some of the features of classical spin to this property when it turns out to be convenient.

So, let us attempt to differentiate this “spin” from the classical property.

First it seems to be quantised into only TWO possible states or modes, which are conveniently called “up” and “down”. It is as if the spin can only take a single speed and be orientated in only two opposite directions.

I am absolutely sure that in considering these things , we inevitably trip up over our prior conceptions and characterisations . For example, we know that electrons (in a current), if directed throuch a circular wire (actually a coil), will deliver a magnetic field along its axis.

But, surely, “spin” cannot be the same, for, instead of a stream of charges having an effect, as they move through space in a particular way, The idea of a single particle’s spin, can only involve a single charge, and the impossibility of dividing that charge, seems to imply that we cannot distribute it in any way within the particle.

Now after this necessary preamble, perhaps we can get to the New Scientist (2951) article, which seems to be allocating ALL the magnetic effects to “electron spin”. (This is usually called having your cake and eating it, isn’t it?).

The key phenomenon that they use to substantiate this theory is that of the coursing of a current of electrons with a random mix of the two possible spins through a magnetised piece of iron, which actually transforms (“polarises”) all the electrons in the current to the same “spin”. Also, from these investigations, we know that a “polarized” (all-the-same-spin) current can reverse the magnetism of a magnet when passed through it. We know that a soft iron core within a magnetic coil will not only increase the effect, but will vanish when the current is truned off. Clearly that type of magnetism is temporary, whereas the single-spin current flow through a piece of iron is permanent. We always explained that phenomenon as being due to the circular motion of the electrons, whatever their individual “spins”

NOTE: So we have some interesting recursive phenomena here.

A current through a magnet will align all its electrons to have the same “spin” It will become “polarized!

If a polarized current is sent through a permanent magnet it can flip the magnetisation to the opposite polarity.

Presumably, a polarized current through an un-magnetised piece of iron will magnetise it.

We also know that if we stroke a piece of iron with a permanent magnet enough times it will also become permanently magnetised.

But, the old explanation in this scenario was that this organised all the electron orbits in the iron atoms to no longer be in random orientations, and to instead line-up to give a net magnetic effect instead of cancelling out.

Can both explanations be integrated?

For, the problem arises with two apparent causes of magnetism – the orbits of charged electrons, and their individual spins. It immediately makes you ask, “How would the spins perform in an orbit of the electron?”

Clearly, if the direction of the axis of spin could be in any of the two allowed directions, that might have various effects, depending on whether its orientation remained the same independently of its position in an orbit.

NOTE: in many areas of research of this author the possibility of recursions have been essential in explaining certain phenomena. And, the question is posed whether the position of an electron in an orbit might cause its spin to be changed by the direction of motion of the orbit, and thereafter the changed spin then deliver its magnetic effects, which was not happening, when that electron was moving freely in space. (There might be a correlation with the spins of planets in the Solar system, but there are even there odd exceptions.). But, certainly any allowed mix of different electronic spins within orbits would overall have a negligible magnetic effect.

But, once more comparing things with astronomy, we get synchronicity with a parent’s spin (in a planet, say), and that in its moon, so that the latter always presents the same face to the planet

The problem may arise from our conception of charge as a point-entity, with no extension , and inevitably produce concentric shells of influence around it in three dimension.

[But, even that is questionable in totally Empty Space, and things might be considerably different, if it was established that these is a re-active universal paving of that Space]

Magnetic effects, on the other hand, do not have that nature. Instead of perfectly even concentric shells over three dimensions, we have two distinct Poles, which define the axis of spin, and crucially impose a unique pattern of influence with lines-of-force seemingly going from one of the two poles out in a curve and back to re-enter at the other. 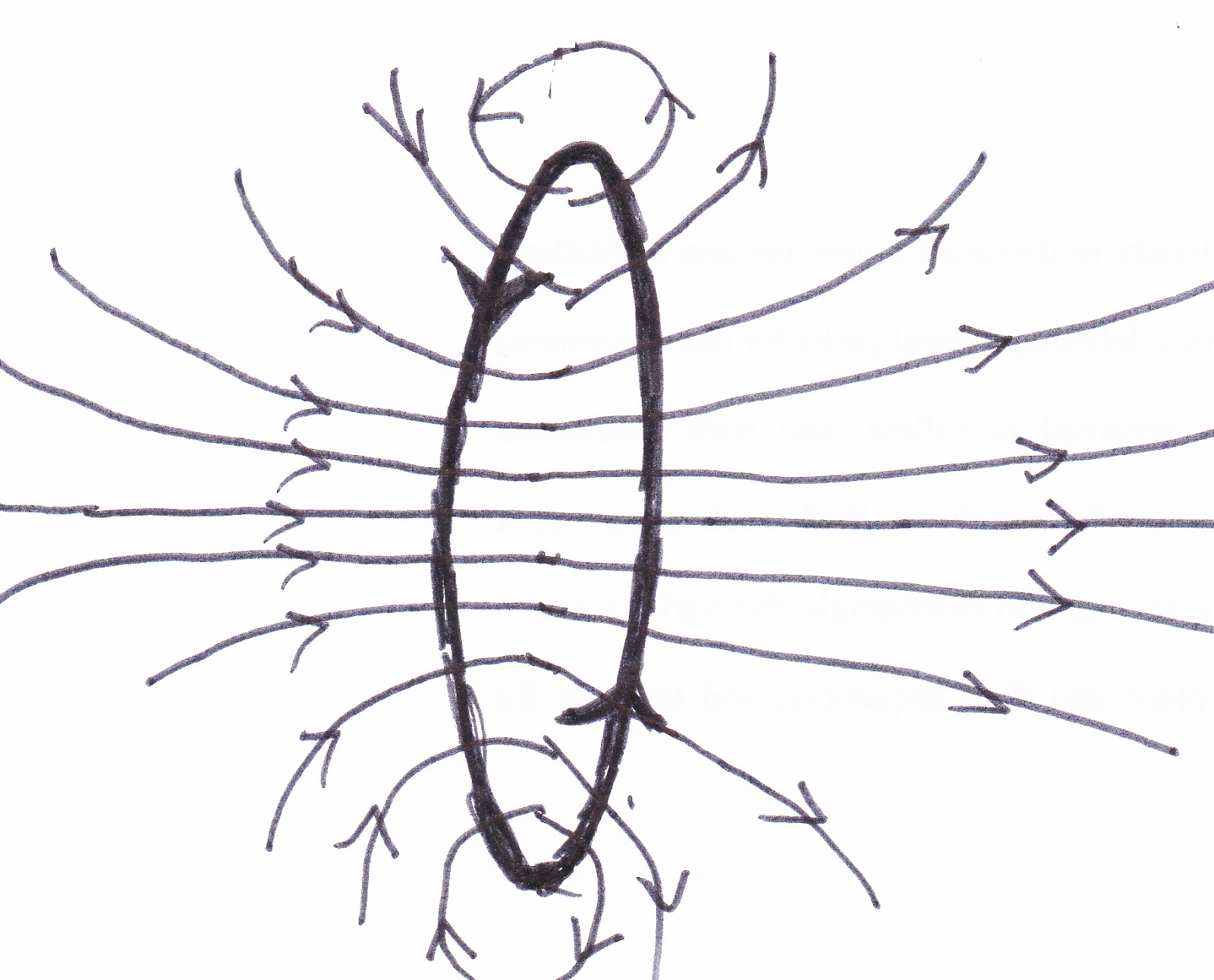 Immediately, we wonder at the fields of influence of a single spinning charge.

For it would seem to have two very different spheres of influence both, somehow, caused by the unit charge contained within it.

For, if it does, this is a very complex pattern of influence, and we even name them differently, with the concentric spheres as electrostatic, and the bipol;ar as magnetic.

Now, as will be seen later, it matters in what these extended influences are made. To suggest that they are there in totally Empty Space seems inconceivable. But, to consider the presence of some sort of Paving of Space by related individual particles would make these fields comprehensible. We would have units of the paving, which would be individually affected by the presence of the electron, and also affect each other to build the suggested and appropriate fields. (more of this later.)

Now, if we limited our considerations to an isolated single electron moving through Space, we might be able to disentangleany interactions – it either causes a change in, or is affected by, other entities in the vicinity.

But, the consideration of such a spinning electron in an orbit around a bigger entity of opposite charge, immediately complicates the pictures considerably. And, to make matters worse, we would have to explain the quantized orbits that the electron is most certainly limited to in that context.

Finally, when an orbiting electron, in an atom, is demoted to a lower-level energy orbit, it somehow emits a “disembodied” gobbet of pure electromagnetic energy, which we call a Quantum, and this can actually move, at the speed of light (186,000 miles per second) right across Empty Space.

Such pheneomena again seem to imply some sort of paving capable of handling these quanta, and propagating them, bucket-brigade fashion, to the furthest reaches of the Universe.

So, from such a complex entity as an orbiting electron (with spin?), we also have to explain its various interactions with such a universal paving. Not only directly, but also indirectly by that paving to other affected entities.

Now, this has been an attempt by this theorist in a particularly problematic case – the so-called Double Slit Experiments, which so confounded those involved in sub atomic Physics, that they abandoned the long-standing philosophical position of scientists as incapable of dealing with the anomalies revealed there, and therefore, took an entirely different approach relying solely upon the overall patterns produced.

Explanation in that context was abandoned completely!

Yet by alternatively having a moving electron affecting a universal paving of Space, and later, in turn, being itself affected by that paving, after both its disturbances and the electron had passed through the slits. The resultant phenomena were indeed fully explained (including the almost unbelievable vanishing of one result, to be replaced by a very different one, just by an attempt to observe what was going on beyond the slits).

Now, whether ot not, this new explanation will continue to stand up, it most certainly does effectrively tackle important questions such as we are beginning to have to deal with, and which the renowned Copenhagen stance certainly cannot!

Crucially, in the theory, the electron does cause disturbances in the Paving, which then can deliver wave-like phenomena, yet these paving units can also react back on the electron (in a subtle recursive manner) , for the disturbances were transformed by the Double Slit arrangement, so that when the paving finally reacted back they had been significantly changed.

Clearly, if such things can occur, we cannot simply rely upon reductive reasoning in our analyses, for, with recursion, we must be getting something more than one-way causation, and the result becomes a mixture of caused effects in both directions , which together produced the finally observed result.And, of course, this certainly could not be simply derived by pluralistic additions of the entities involved and their “constant & separable” qualities.

Now, of course, Mankind had to start somewhere, and that would be where simple relations could be at first glimpsed, and then later organised for, so that they couldbe investigated and their interactions quantified.

But such a purely first-order investigation, would, of necessity, be incomplete and certainly artificially oversimplified. And as Mankind consider ever more and very different phenomena, he would be, to an important extent, blinkered if continued to maintain this first-order approach as being adequate to deliver the full story. Clearly, such simplifications would tend to lead him in diverse directions, and studies would unavoidably split into ever slimmer and separate areas of investigation, if consistency was to be maintained.

At some point an holistic approach would have to overturn the plurality of the usual first-order methods.

NOTE: Some years ago, my son became interested in such things, and immediately cottoned-on to the fact of these processes of recursion in all kinds of development being completely unavoidable, AND hence undeliverable by the usual reductionist techniques, for such effects didn’t only happen once, but became crucial improving processes in all kinds of changes. He was, of course, correct, and now is a colleague in these endeavours.

And it seems to be here, in the hierarchy of interactions involving a single electric charge, that we should start...
Posted by E Journal at 13:44