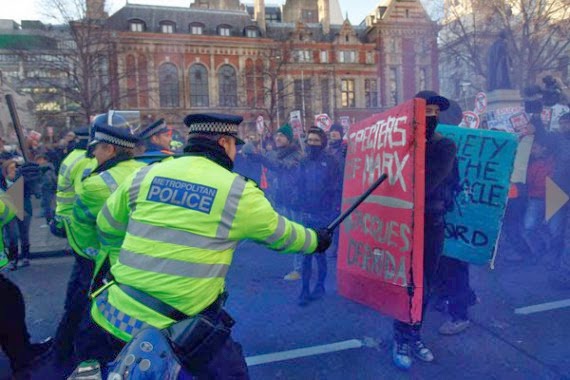 Well, it certainly isn’t Stalinism, which ruled for most of the 20th century in the "socialist" countries of Russia and China.

It isn’t solely a guide to political action for socialists.

And, in spite of what is claimed, it isn’t Scientific Socialism!

And, to also deal with its detractors, it isn’t the Devil’s work on Earth.

What it is primarily, and most importantly, is a Revolutionary Materialist Philosophy!

It has appeared to become many things since Marx turned Hegel “on his head, or rather upon his feet”. For, what Marx achieved was that he was able to carry over the significant gains of German Idealist Philosophy (where it profoundly addressed Qualitative Change) into Materialism, and thus transformed the previous ideas of materialist thinking from mechanist to dialectical. Hegel’s magnificent achievements were wrested from their idealist context to integrate qualitative development into the materialist approach. This was its primary, continuing, and essential contribution!

And, we must be crystal clear, for up to that point Science itself was, though revelatory and pragmatically useful, still purely mechanistic, and could not cope in any real way with qualitative changes and real creative development.

It was the brilliant contributions of Hegel that Marx wanted to integrate with both the achievements in Science, and the newly emerging understanding of Social Development in the History of Mankind!

And, be warned, as soon as this crucial transformation is lost sight of, forgotten, or shelved for later study, you will retrench back to prior forms, and turn these essential intellectual gains into lifeless rules, without any real, transformative understanding. You have only to read the words of innumerable self-professed, present-day “Marxists” to see where such an omission is certain to lead.

Now, I feel it necessary to start in an unusual place to re-iterate, and rejuvenate, this standpoint and method, and to indicate its necessary future development. I need to severely criticise Modern Science!

And the major criticism is just how unscientific it has become!

Alas, Science was always somewhat compromised from the outset, for in spite of being firmly materialist (which opened up entirely new ways of both studying and interpreting Reality, and, indeed, finding its natural imperatives), it had to significantly compromise its standpoint in several crucial ways.

Yet, the reasons for these mistakes were understandable. The concrete World was certainly not easy to study!

For, in all areas, it is a complex of many diverse, simultaneous factors, such that almost every single situation is made increasingly opaque by these many constantly varying factors. And this means that, at best, any evident relations could only be glimpsed momentarily, before vanishing again.

So, faced with this impossible-to-study blur, the first investigators had to seek around for those few areas where relationships appeared simple and maybe also understandable.

They found such a situation by looking upwards to the Heavens. And, there, among the stars, they did find relations, which did not vary or vanish: they were the most dependable relations anywhere. And, in the nightly and seasonal movements of the unchanging stars, they had a realm in which they could reliably match events to precise times, so the first measurements were calendrical, and enabled correct predictions to be extracted.

Hence the first scientists were astronomers, for in the night skies they found the first studiable patterns. And in places like Ancient Egypt, the matching of star positions with the timing of the essential Nile Floods enabled the organisation of a brilliant agricultural nation, and one of the most culturally rich civilisations of the Ancient World.

Now, that experience suggested that the whole of Reality was likely to be similarly organised, but was usually confused by the multiple conflicting factors, which inevitably made most things very difficult to reveal and then study and understand. But, the more ingenious investigators began to control situations, in an attempt to reveal the underlying relations, or “Laws”, which, it was thought, “made” the situation what it was.

Slowly, by isolating such areas, and removing as many confusing factors as possible, while holding others constant, these early scientists revealed quite clearly particular relationships that they could measure, turn into “laws”, and use (as long, that is, as they maintained these carefully organised circumstances).

This methodology was, and still is, what we call Science.

But, that initial contribution meant that while only in possession of such a “Law”, those scientists could not but attempt to go further and also attempt to explain why those things behaved as they undoubtedly did.

These further new considerations made possible an Explanatory View of Reality, and what much later became known as Scientific Theories. And it was then that these became THE major purpose of Science.

Now, let us be clear, several stages were involved in these revelatory methods, and it was only in the third and most significant Phase that the understanding of phenomena was attempted. And this is surely the most important, and difficult, Phase of all.

It has to be this Key Activity, which makes the whole thing scientific, and it is with this meaning that I say that certain professed “Marxists” are certainly not scientific, and their supposed version of Marxism is definitely unscientific.

But, we must not laud the gains of Science too much.

For, from its inception, and based upon the above described experimental methodology, it devised and formulated the fundamental assumption of the Principle of Plurality, which apparently validated both their practical methodology, and their derived theories. For this Principle insisted that complex Reality was composed of many different Natural Laws that were eternal, yet merely added together in various sums, could deliver all actually existing natural phenomena. It validated the usual selective and restrictive experimental conditions, achieved by the careful control, filtering and strict maintenance of its experimental situations, and were mistakenly seen as removing the blur of many other "laws” to be able to reveal, in all its natural glory, each purposely targeted “Law”. And the “Laws” so revealed and extracted were considered to be exactly the same, wherever they appeared and in whatever particular mix. This assurance was the ticket to validate the colossal development of Science, BUT it was also a false and crucially misleading straightjacket, for it really only allowed the Analysis of constrained and purposely stabilised situations. Plurality and its consequent assumptions and methodology made them the Science of Stability only!

Now, it has to be admitted – there wasn’t any other possible approach as far as those practising scientists knew, so they never hesitated in their prodigious surge forwards. And, in addition, they also seemed to have very reliable allies, who also fully subscribed to the Principle of Plurality: they were, of course, the mathematicians.

For, long before the first “scientific” investigations, Mankind had already tackled many of the patterns that occurred in this World, and, by intelligent simplifications, had developed both Arithmetic and Geometry. And, their conceptions of Reality were that the relations they were both finding and formulating via Patterns and Forms were, in fact, the “real determinators” of Reality. And, needless to say, these “Laws” were eternal, and hence in full conformity with Plurality!

Indeed, the data extracted by the scientists could always be fitted up with one or another of the mathematicians’ many standard Forms. These two disciplines seemed to be made for each other!

But, the philosophy of the mathematicians did NOT gel with that of the explanatory scientists, who desired to understand as well as accurately describe Reality. And, this saw the mathematicians’ Formal Laws as making Reality what it actually was. While the scientists had concrete Reality with its properties and consequent causes actually producing the revealed Forms or “Laws”. The mathematicians were idealists! While, the Scientists were materialists.

Nevertheless, on a thousand fronts, these two groups made a worthwhile alliance! Yet, never was there such a glaring example of Cognitive Dissonance!

And, of course, it couldn’t last forever, for the time would surely come when their differences would outweigh the advantages of such an uncritical alliance.

It did, however, survive much too long!

Indeed, the important turn by Marx could have provided a new direction for Science, and though colleagues like Engels made an energetic contribution in that direction, he wasn’t a scientist, and what was required was for the new philosophic stance to be taken up by full-time, professional scientists.

Now, the fact that this never happened was because marxists were forgetting their crucial bases, and concentrating upon too narrow a range of priority concerns, just when the most important general, philosophical questions were presenting themselves in key areas of Science.

The zenith of development in Marxism was clearly achieved during the successful Russian Revolution by the most advanced practitioners and theorists ever, with people like Lenin and Trotsky, during and immediately after that Event. But, unavoidably, and essentially, this trend in developing Marxism was almost entirely dedicated to intervening in the trajectory of a Revolution for the benefit of the Working Classes, and any serious attention to Science was completely left out in the cold.

Before the Revolution Lenin did attend to Science via his book Materialism and Empirio Criticism, where he both made important philosophical points, AND pulled back some of his Bolshevik colleagues from drifting towards the accelerating direction that Science was moving in.

But, the crucial task was never carried through. And, not only was Marxism diminished by this omission, but so was Science.

By the beginning of the 20th Century the dichotomy between Mathematics and Science was coming to a head - precipitated by both the discovery of the Quantum, and an increasing number of inexplicable anomalies, particularly occurring in Physics, and presenting a whole series of non-transcend-able impasses due to both Plurality and crucial unsolved problems of the Nature of Empty Space, the Propagation of Electromagnetic Waves, and also Action at a Distance. Indeed, the philosophical questions could not be delayed any longer, and by 1927 at the Solvay Conference, the only solution that kept both Plurality and mathematical Forms as primary was the abandonment entirely of Explanatory Theory, and a total subscription to the idealist belief in eternal natural laws as embodied in equations.

Now, this was the most significant opportunity for the only philosophical stance that could address these conundrums – Marxism, to step in, and by solving these questions gain tremendous genuine status among scientists and re-invigorate Marxist Theory in a very important area. Indeed, such a success would undoubtedly have gone on to involve many other disciplines, and recruit some of the very best minds to the Working Class cause.

But, that didn’t happen, and what claimed to be Marxism (in Russia and China) was nothing like what its initiators had intended it to be, and, as such, was incapable of addressing such questions. The prestige of the Russian and later the Chinese Revolutions gave credence to this mockery of Marxism, so no real continuity was remaining. It was down to individuals and small groups, without the numbers, resources or training to tackle such questions

So returning to the initial implied question, “What is Marxism?”, it certainly cannot be left in the hands of many who profess to be its current theorists. They are not Marxists and cannot tackle the crucial questions related here.

It is my convinced contention that the real Marxists can only be revealed by the solution of the current crisis in Physics. They who crack this impasse will reveal those who have both maintained and developed what its creators were struggling to achieve.

Now, this short piece was written as an introduction to a new series to be published on the SHAPE Blog entitled, “How do we get Socialism?”, which will be available in regular instalment during the rest of 2014.