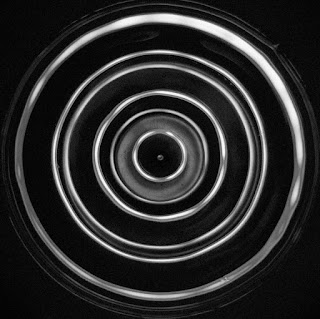 Is it intrinsic or caused?

The whole basis of the Quantum Revolution in modern Sub Atomic Physics is that the Quantum of electromagnetic energy is intrinsic to the Nature of Reality, so that all theories have to be modified to build this requirement into them.

But, could it be that there is a purely physical explanation for energy being cast into, and thereafter maintained as such descrete forms?

This might seem almost sacrilegious to literally all modern physicists, but a purely theoretical investigation into the effect of a totally undetectable, but both affected-and-affecting Universal Substrate, has questioned that assumption, by finding physical ways that such energy might have a Quantum Nature imposed upon it - especially as the very same nature would, thereafter, in its normal means of propagation, be rigidly maintained.

There was, of course, another good reason for embarking upon such an investigation, which was clearly that this theorist was unhappy with the anomalous results of the New Theory, especially in the whole series of Double Slit Experiments, which had become cornerstones of the Quantum Revolution, and had, in addition, also led to the dumping of Physical Explanations entirely, for a wholly formal mathematical description as being "more reliable", and still allowing prediction and reproducible phenomena.

As far as this physicist was concerned, however, the real heart of Physics was in its explanatory power, rather than its reliable formal predictability, so he embarked upon this exercise to also investigate all possible avenues for such an alternative to be available. And the Double Slit Experiments with their supposed "Wave/Particle Duality" cried out for a substrate-based solution.

But, there was no discernable Substrate!

It could only be a joint-particle, of the same basic model as the atom but composed of sub-units - opposite in every possible way, but capable of carrying energy also hidden within it. The obvious theoretical candidate had to be a mutually-orbiting pair consisting of:-

An Electron of ordinary matter and a negative charge

A Positron of antimatter and a positive charge.

These, being of the same size, they would share the same orbit, but always occupying the exact opposite positions within it.

Such a joint particle would be invisible, but could carry a quantum of energy by the promotion of its internal orbit!

But, why should that carried energy be only as a Quantum?

The answer to that question is also answered by this new particle, but only revealed in its crucial role as part of a Universal Substrate. So, before we go any further we should establish just how this joint, neutral particle could possibly form an effectible and affecting Substrate.

It doesn't seem possible for such a neutral particle to be capable of forming any kind of "connected-Substrate", but investigation of these particles, in very-close proximity to one snother, has shown, theoretically-at-least, that they can.

For, when very close together, the sub-particles of one such unit will transiently be able to affect those of another. Indeed, as the sub-particles orbit they will cause an oscillating attraction and repulsion affect upon the two involved overall Units. And, the consequence would be that units - getting close enough, would be captured into a loosely-connected form, termed a Paving! And, all participating units would oscillate about mean positions at fixed separations of all the units involved. This would make a bucket-brigade propagation of quanta possible at a fixed speed - the Speed of Light - "C".

Now, for those impatiently awaiting the Creation of the Quanta, we are finally approaching the point where an explanation can ultimately be delivered.

It concerns the various possible modes of the Paving! For, though the form described above will be the default mode of the Substrate Units in quiescent regions, it can very easily be dissociated into its components Units, which in the consequent free-moving form are usually termed Photons.


And, the same material interlopers that precipitated such a dissociation will also tend to drive them into Streams and even Vortices. And though those these modes will be usually temporary, there is one set of circumstances in which that will not be the case.

And there will be only a small number of optimum orbits, which display a persisting balance, so become Stable: these are the Quantised Orbits for that atom!

And hence, all transfers of energy changing these orbits will always be between that atom's stable orbits!

It is only in atoms where the specific quanta of energy are determined!
Posted by E Journal at 15:16