SUBSTRATE THEORY I: This issue of SHAPE Journal is the first in a two part bumper edition on Jim Schofield’s Substrate Theory, curated to mark the 10 year anniversary of this publication, and to finally bring together all of the crucial materials for this burgeoning physics.

This is a completely new approach to sub-atomic physics that hypothesizes the existence of as as-yet undetectable heterogeneous material substance, filling all of known space. Unlike its distant cousin, James Clerk Maxwell’s Aether Theory, this new Substrate conception can explain all Quantum phenomena, the anomalies of the Double Slit experiments, Wave/Particle Duality and its own strange illusivity.

Without wishing to sound hyperbolic, the ideas contained within these issues are nothing less than a revolution in science - a complete rethinking of contemporary physics from the ground up; commiting to the scrapheap of scientific progress much of the last century’s detour into a realm which we might call Quantum Ideality.

The near-total dominance of Mathematics in the field has lead us further and further away from the material reality we purport to study. The more advanced our technological solutions become, the more convoluted our route to truth, the more self-fulfilling our prophecies.

In Substrate Theory we see a genuine attempt to return physics to materialism, but also to try and explain materially, the many weird and wonderful phenomena we have observed at the Quantum Level. This is no simple return to the halcyon days of simpler classical physics, not a retrograde movement at all, but instead a new gesture towards a truly holistic study of the material universe - a methodology that eschews virtual particles, Quantum Entanglement and all manner of Mathematical constructions, which uniformally fail to explain the material causes of the most basic physical phenomena - gravity, the propagation of light across space, disembodied magnetic and electrical fields.


While Substrate Theory certainly has the potential to upturn the entire apple cart of modern physics, the pieces of the puzzle still need assembling, even if all the elements have been devised.

This issue begins that process, collecting together various prior publications on the theory, and weaving them together into a coherent narrative. This is a somewhat difficult undertaking as the ideas are always evolving - the goal posts moving.

Our editorial solution to this problem is to split the task into two parts.

In the first installment, The Lepton Substrates, past papers on Substrate Theory are collected together in historical order, with some new editorial pointers mindful of when certain ideas were first published, at what point in the theory’s evolution certain assertions were made, and that some of the original ideas have been necessarily superceded, but are still required here to understand the theory in general.

All the foundation arguments and elements of Substrate Theory are explained and discussed here. From the original notion of ‘Empty Photons’ pervading all space we start to see what these entites might actually be. How pairs of mutually orbiting Lepton particles must be undetectable, but could easily pave ‘empty’ space. What those different Leptons are and how they can carry quanta of energy in orbits, passing them bucket-brigade across the universe. How quantised orbits may have a material explanation in a dialectical relationship between levels of the Substate.

Over the course of The Lepton Substrates the full picture begins to form and the unexplained contradictions of Quantum Theory start to fall like dominoes.


In the second part of this series, Towards the New Physics, we look beyond the nuts and bolts to the potentials, publishing Jim Schofield’s latest writing on Substrate Theory, which sees how the Universal Substrate can help tackle all the biggest questions in physics, from the Spacetime Continuum to the Uncertainty Principle, from Casimir Effect, Redshift, Time Crystals, Superfluids and Dark Matter, to Virtual Particles and the work of Frank Wilczek.

What becomes increasingly apparent in all this research is that even if this particular model of a Substrate is wrong, the basic premise that one exists is right. It has been the missing premise since 1927 - the invisible elephant in the room of an ever-more esoteric Physics. Substrate Theory explains far too much to be ignored any longer, in a discipline which has all-but abandoned explanation for the most obscure of Mathematical games. 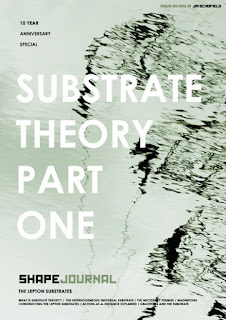