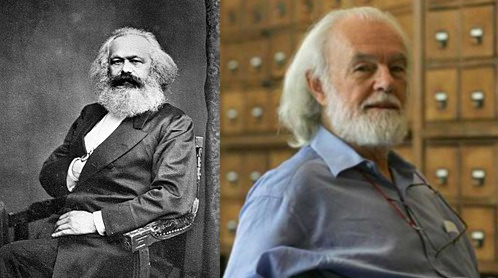 Is A New Approach Needed?

If the traditional Organisations
of the Working Classhave been dismantled,
how will they be replaced?

David Harvey is one of the leading Marxist scholars in the world, and his analyses of Marx's key works are invaluable for any current Marxist theorist or activist. In one of his Anti-Capitalist Chronicles, he not only bemoaned the loss of the traditional Political and Industrial Organisations of the World Working Class, but also admitted that all the present day alternatives were both usually entirely disparate in their mobilising-motivations, as well as always being short-lived in the Mass actions they organised and participated in.

And, even though he also saw absolutely no-way-out of Capitalism's ever multiplying crises either, he could not conceive of what he called "A Revolutionary Solution".

Yet, without such a demolishing of the current Capitalist Structures of Provision, Distribution, and Enforcement being so eliminated, the Working Class (in no position to be self-supporting in these regards) would as a result suffer the most!

It was, as Harvey saw it, more like the terminations of many prior Economic Systems via unavoidable demolishing cataclysms, that could never, for truly long periods of time, remedy the collapse, delivering only a Dark Age, which took a considerable amount of time to slowly-find working alternatives, especially in what would now be the most highly developed Ex-Capitalist States.

Indeed, no matter what means he considered, he concluded that a Social Democratic transformation of Capitalism was the only way forward, and that within which, wholly new pro-Working Class facilities, as well as appropriate Social Services and access to Education, which could possibly be constructed FIRST, to equip the Class for Revolution.

But that did happen in the UK, following the Second World War! I know because I benefited from it directly, as a Working Class boy from a very deprived background, who got an Education and ended up a Professor in a University. Yet Education at all levels was still staffed by the old Middle Class. I was educated to join those colleagues instead, and never to appropriately equip my Class!

But, how on earth did a majorly Peasant State like Tsarist Russia, ever manage to do it? Harvey doesn't answer this question.

Also, Harvey does not consider that the Working Class-in-Arms could take over Capitalist enterprises, Trading Firms, Banks, and the rest, Pay No Compensation, and from the outset re-organise them Democratically as Worker-Owned and Run enterprises. For, after all, they had always staffed such firms under Capitalism. It would be the ex-Ruling Class who would not even be able to feed themselves, or work the complex machines of Industry.

They were tasks always carried out by the Working Class!

Globalisation and neoliberalism may have completely changed the way industrial capitalism works, but the computer-controlled warehousing and distributive arrangements are still ALL staffed by ex-workers, who had lost their well paid jobs and unions, and got their current posts wherever they could find them - thereafter kept totally isolated from one another (in roles such as delivery drivers).

They could, after the Revolution, come together collectively to organise what they now OWNED. And, once-skilled workers could get together and forcibly take over premises, machines and facilities, as well as transport to construct and run all ex-capitalist service companies, and transform them into Real Social Services.

Come on David, we are talking about a Revolution!