Coronavirus and the Geopolitics of Capitalism

Harvey's Import of Geography into The Development of Capitalism


I feel I must strongly recommend David Harvey's two part contribution upon the geographic dynamics of Capitalism's totally unavoidable expansionist Development in his Anti Capitalist Chronicles on Youtube.

For, as a Geographer himself, he is ideally placed to wed his professional studies and expertise in this area, to his current fruitful and empowering involvement with his critical studies within his modern Marxist stance - via his historically long series of lectures upon Marx's Das Kapital. along with his subsequent-and-crucial treatment of Marx's earlier work upon Grundrisse.

But, though both essential and valuable in revealing that important, and sure to be on-going aspect, it is in an area which has thus far solely been limited to the entirely Pro-Capitalist lobby. So, as such, it delivers to Harvey yet another exclusively Pro-Capitalist body of Research, very similar to that which confronted Marx in his lifelong studies in Economics, as literally all his sources were from Pro-Capitalist apologists for that Emerging System also.

And, of course many of the chosen answers to address Crises in the Capitalist System were often of a Global Nature, with Imperialism extending Capitalism's reach into previously independent countries to secure them as protected sources of necessary resources, and even as more profitable sites for Productive Enterprises, because of the low cost of indigenous Labour.

So, Harvey will certainly have a similar onerous task in extracting as much Truth, and damning as much Falsity, as he can from those committed sources.

For example, without that vital critique, his revelation of the Global Dimension of the Geographical aspect of Capitalism, is certainly NOT where the forces aiming for Socialism can derive the required Understanding and consequent extra energy for the battle to come. Taken alone, without a demolishing exposure of both its own and all other involved contradictions, it would certainly seem to deliver an overpoweringly negative set of possibilities, to any so-derived political perspectives.

Yet, if there is one thing that a drivingly-positive Socialist Campaign both could-and-should contain, it is such a Global perspective, to guide its necessary adjustments to cope with such contradictions driving all attempted solutions via geographic relocations of one kind or another - something which is less and less evident, especially now, with the Coronavirus Pandemic focussing everything solely into the Family Home.

Yet, of course, the current unresolved contradictions of Capitalism are precisely what have turned this Event into a Global calamity.

While, the reactions of a country like Cuba show what could, and indeed should be being done, as they offer to send Medical Teams to wherever in the world they are needed! The most pressing question within this current Crisis, has to be what Socialists can do, when they are not only limited to their own homes, but also exist in a time in which the Labour Organisations (particularly of Trades Unions), are no longer able to act within physical factories,  offices and schools, but also with the difficulty of concerted action on the streets. 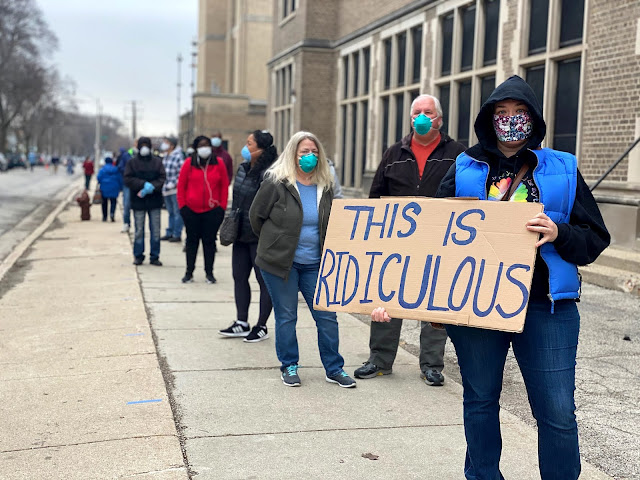 And, there are undoubtedly aspects of these restrictions that are political too: for the Global calamity of the Coronavirus that will press the right-wing governments in Britain and the USA, to change things to make the Working Class PAY for the Crisis - as they always do! And, as restrictions are eased, will elicit action on the streets as the Governments do what we expect them to do!

For example the crisis in the USA could be truly colossal, as they have NO National Health Service, and the obvious solutions possible in a Socialist State will never be allowed in a staunchly Capitalism Regime! Look at the Black Lives Matter protests for a taste of where things might be heading...

Any action we undertake later will have to have been prepared for NOW, both theoretically and organisationally!

But how do organisations get built, in such circumstances, and what possible economic actions can thereby be effectively organised, and then implemented upon Social Media? For, it has also effectively been a shutdown, of all of these possibilities too!

Now, all the constraints are NOT totally determined by the extended Corona Crisis, for China (where it all began) has already turned the corner of a complete shutdown, which proves that some of the extensions elsewhere definitely due to the political counter-measures (and their tempos of implementation) both of which were decided-upon-and-implemented, for other so-far unadmitted reasons, apart from the Pandemic itself.

The real revelations of their intentions, will only start to become obvious, by the way Governments plan the emergence from those measures: for example, how China, and then everyone else, perhaps very differently, organise things via the threat of a second wave of the virus, due to the nature of the prior conditions for its Emergence and thereafter, the actions put in place to constrain its further progress.

Indeed, the crucial one will be the USA, for its over 300 million inhabitants, the almost total lack of a National Health Service, the Health Consciousness that such a lack of relevant policies engenders, and the exorbitant cost of their Private Health Companies, and the very high prices of pharmaceuticals, that seem to threaten chaos in that increasingly benighted Country!

And to-cap-it-all, most of the poorer countries on Earth will have literally nothing to protect them when the Crisis hits, and even the newly developing nations like Brazil and India, seem destined for chaos too: for the military have ousted their neo-fascist dictatorship in Brazil, for a purely military alternative, and the Hindu leader of India could easily precipitate a Hindu/Moslem series of pogroms, if not an all-out Civil War.

The Left-worldwide must start now before the more reactionary constraints are implemented from-the-top-down, in using the means they still have - The Internet, and their new capabilities, to prepare for all they will need in the next phase planned by Capitalist Governments.

And the political responses, from a still immobilised population, will have to be what can be organised on Social Media, and with the won-over-support of the National Health workers, and will involve financial arrangements over the Internet!

You can watch David Harvey's series on the Geopolitics of Capitalism, below: