We must turn our efforts to the holistic study of complex systems and what Schofield calls “Systems Effects” via the “Systems Approach”, if we’re to turn a corner in our understanding and finally break free from the shackles of reductionist Pluralist thinking.

It soon becomes apparent that we know very little about how natural systems actually come to be, how they evolve over time, what keeps them going over hundreds or even millions of years, and what finally precipitates their collapse. Only a Holist approach stands a chance of answering these vital questions about Reality.

And as the vast systems of Capitalism and our Global Climate begin to collapse, a Holistic understanding of Systems in general, will become vital for our survival as a species.

As Schofield writes in this issue: “Our so-called Explanations, are often far from the mark, due to their being totally unaware of the Real Full Processes of Development, behind Reality. And this leads to many mistaken conclusions, rarely addressing the absolutely vital, self-made and inevitable mounting Crises of our remarkable History, in all its causes, both positive and increasingly dangerous! So without, the Key Revolution in Real Understanding, that we await, this remarkable Development, this unfathomable work of the Evolution of Matter - culminating here in us, in Human Beings, and in this society - could easily end in an existential catastrophe.”

The Origin of Systems, as a piece of theoretical writing, is extremely ambitious in scope, but ambition is certainly needed now, when a Revolution in how we think, is needed for our survival. 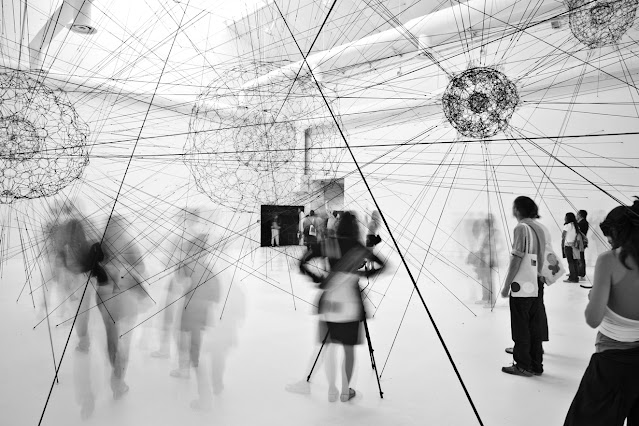 This month’s issue deals with the complexity and interconnectedness of natural systems, and our worrying inability to understand them through current scientific methods. As always in SHAPE Journal, we try and chose the work of great and thought-provoking artists to accompany the theory text, not to illustrate the ideas discussed obviously or directly, but to form a parallel but relevant narrative on the core concepts involved.

For The Origin of Systems we chose the work of installation artist Tomás Saraceno. He originally trained as an architect, and his intricate and immersive works seem to literally build bridges between science and art. Saraceno certainly sees the Earth as a complicated and vast system, we must try and understand, describing it as “the fastest vehicle that ever existed”. His work is concerned about the threat to natural environments and ecosystems, also taking inspiration from neural communication networks, origin theories, sub atomic physics and spiders.
Read Issue 75 of SHAPE Journal here...