The Political Conditions Necessary for Revolution


The major problems are, by now, well-entrenched, and seem to make successful revolutionary activities impossible.
It is over a century since the Russian Revolution - the only successful one of its type - and that was, surprisingly, in a relatively backward, predominantly peasant country, spread over two continents! And, it occurred in the midst of a World War, having effects absolutely everywhere, and one in which millions of ordinary people were extensively involved in combat - to supposedly "Defend Their Country". And, Surprise Surprise! - occasionally, the masses-in-arms sometimes kill their oppressors at home, rather than the "identified enemies" abroad!

They were dangerous times - all-round!
Indeed, subsequently, within a defeated Germany, there still were the most developed Working Class Political Parties in the World: BUT inter-rivalries between them, along with the major injustices of the Imposed Peace via The Treaty of Versailles, convinced sections of that affected population, and particularly the Ruling Class, to turn dramatically to the Extreme Right - leading to the rise of a major Fascist Party in the form of Nazis, and the German Working Class Parties were systematically dismantled!

And Red Menace Hysteria converted most Working Class Parties into mere agitators for a better deal under Capitalism. And Revolutionary aspirations faded from continuing to move significant sections into any sorts of effective political action.

Indeed, it appears as if The Working Class requires Major and Devastating Crises for them to even begin to consider such actions: but, perhaps the current Covid Crisis, the inappropriate actions of the Ruling Class to deal with it, and the consequent upheavals in Employment, could indeed finally produce enough growing deprivation to precipitate constantly increasing action on the streets.

So, vitally, any remaining Revolutionaries simply MUST be both clearly-and-loudly predicting the Coming Inevitable Trajectory of Future Events, AND be ready to rejuvenate the only kind of radical Politics that will ever deal with such a Mounting Avalanche of Crises, which had been clearly building up for some time! And, these must be both well prepared for - and consisting mainly of Working Class Youth, organised from Working Class Areas - to prepare a major and noise-assisted Massive Set of Socialist Demands, alongside extensive Action to aid the most Deprived with Vital Help and Collections of what they will most certainly desperately need.

And perhaps the most devastating area will be in Housing, which will rocket well beyond the means of the Deprived Poor! Places must be found and taken over for them - AND DEFENDED TOO! 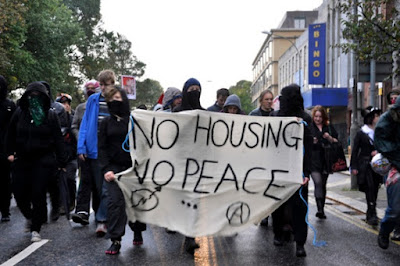 We must get the Working Class doing what they are best at, using their skills directly for Their Own Class! So, how do we do it?

We fight fot Local District Collectives, where all who want to help, AND, indeed those who Need Help, can attend and make their suggestions! Organise collections, and prepare to help the increasing numbers of Homeless, as the Crisis develops too!

This may seem premature - but it isn't!

Starting Now, with Class Help, will show who really cares!

Begin now in all ways possible to build our own version of Social Responsibility and Support!