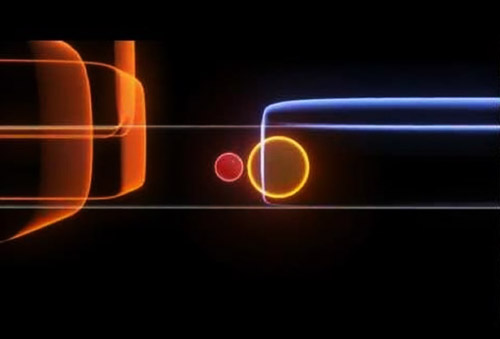 or is it the neutrino,
or perhaps the positronium,
it could be the neutritron,
or even an Empty Photon………….?
The trouble with starting with equations as the only reliable basis for theoretical speculations, is that you only “see” what fits your forms. There is no concrete Reality as final arbiter – whatever is thereafter seen has to be fitted into the universally agreed “essences” – the equations that we have extracted previously.

Now this means that the only things that can be admitted into any “view of the World” absolutely must conform to these “essential and final” equations.


Of course, being Pure Form, such have been manipulated in all sorts of “legitimate” ways for what now amounts to generations of physicists. The equations can, and indeed have, been pushed (literally without limit) into all sorts of odd corners, and still be regarded as entirely sound [Note: Mathematical Chaos proves that].

So, the saga unfolded in the article by Michael Brooks and Richard Webb entitled All or Nothing [New Scientist 2864] can, and indeed must, occur!

To “explain” some new discovery, the existing deck of cards must be shuffled and shuffled again, and then pushed to the limits in accordance with meta-forms (forms of forms) like Supersymmetry to accommodate the “new”! The very same suit must be re-tailored to fit absolutely all occurrences.

So, this is what is behind this scarcely credible tract! Almost everything “might” be explained by a new particle, which seems to include both Matter and Antimatter as a single unified entity! In a veritable burst of chalk dust, many worried theorists try anything on their blackboards to solve the problem.

Yet, if they were real theoretical physicists instead of mathematicians, the model they require would be staring them in the face, but these equation manipulators can’t possibly see it.

The physical model that is required is the atom - and the components that make up the new entity would be one positron (antimatter) and one electron (matter) – mutually orbiting one another.

Indeed, such a particle has already been seen and named the positronium. But, that having been discovered in a High Energy Accelerator, was shown to be highly unstable with a minute lifespan, and hence dismissed for most of the suggested roles for the new entity. BUT, again using the atom as a valid model, the involved orbits in the positronium could there have been greatly elevated and very close to the limit of stability of that entity. The tiniest additional energy could be sufficient to totally dissociate it into its components – one electron and one positron – a veritable Pair Production indeed! So, if we bring down the contained energy considerably we might well be considering – a photon.

And, if we continued until we reached the minimum energy consistent with the continued existence of the entity at the other extreme, we could have an Empty Photon. And such could well be entirely stable in that state. Indeed such a particle (named by this author as the neutritron) could be everywhere – indeed the most numerous and most undetectable particle of all.

Think what else it might explain!
Posted by E Journal at 14:39