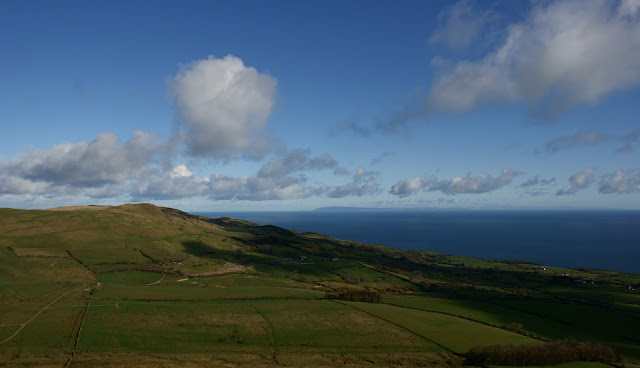 If you are not already fans of the oft-repeated TV series Time Team, may I introduce you to a recent re-airing on More4, first broadcast early in 2009, but well worth seeing again. The greatest contribution of this programme is in the always "laid-bare" trajectory of their ideas and hypotheses as they develop about the current site, and the way they home in from the tiniest fragments of pottery or flint, and a few bumps and depressions in the land to, slowly but surely, via a series of trenches into chosen ground, open a door onto our past.

This episode was at Knockdhu on the County Antrim coast of Northern Ireland, where Time Team carried out the very first excavation of this enormous promontory site overlooking the sea.


It transpired that it was once a bustling village in the Bronze Age, and the puzzling thing was the presence of defences landward. Also there didn't seem to be much actually on the promontory for the village to have been situated there. It seemed to be a cold and windy, yet misty and infertile mound. So, why were they there? By chance they found what could only be interpreted as a flint mine nearby - but surely such a resource would not require a defended village? Although what they managed to achieve in three days was remarkable, I am convinced that a great deal more than they had time to reveal was also in evidence there. For it was only on the third and last day of their investigations that the thick mist lifted, and they could see, both the surrounding sea and the relatively close-by Scottish coast.

To me, this wasn't an Irish village, but a Scottish one.

Why? Well apart from the inexplicable landward defences, the large and imposing gateway was clearly approached by a path from the coast below.

But why would there be a Scottish outpost here on the coast of Ireland?

The answer seemed to be flint.

Flints from the mine close to this site have been discovered in abundance in Kintyre (in Scotland). Also,   small quantities of some other non-flint stone tools were found at Knockdhu that had definitely come from across the sea - both Scotland and England (the Lake District). Knockdhu was a "goldmine" for the main tool-making substance of the time, flint, which was very scarce over in Kintyre. A significant maritime trade had grown up - but effectively all one way. The Scots had established an outpost to ensure the continued passage of large quantities of flint back to Scotland, and the defended village was to assure that supply continued without any interference from the Irish.

Now, in the past week I had already written a few papers on the importance of sea travel for Early Man, and the very same arguments were voiced in this TV programme about coastal sea travel. As soon as the confusing features of Knockdhu were confirmed, they were immediately solved if the settlement were of foreigners, who were taking the local flint, and had to protect their sea-access to and from Scotland.

The unusual thing about Time Team is that you get involved along with them in their deliberations: you dream up your own two-pennyworth, add to their speculations. It is a fine programme in this respect. If you are interested in such things, it is well worth a watch!
Posted by E Journal at 12:57