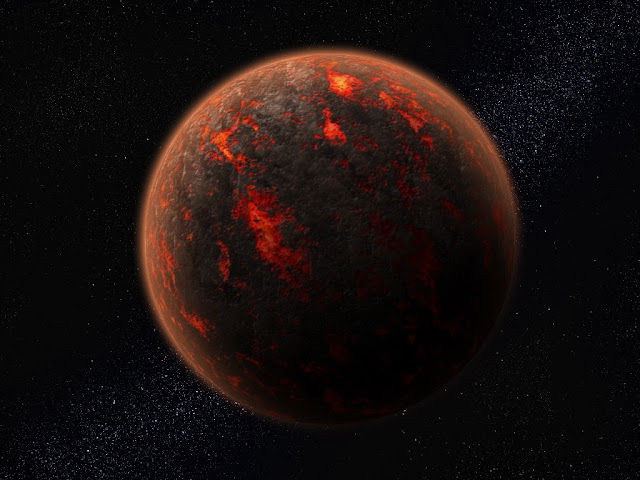 Let us place it exactly where the Earth is now, in a containing situation very similar to that which pertains there today – but without either a single living thing of any kind present, nor anything that would have been made by Life.

What then would we have?

Starting with the nature of the substance of that planet and how it was originally constructed, it would certainly be hot! Indeed, having aggregated via millions of collisions with other solid bodies, both large and small, arriving at cosmic (very large) speeds, and arriving literally incessantly over a very long period – indeed, hundreds of thousands, if not millions, of years, it would certainly have been transformed to contain truly vast amounts of energy, which as it grew in size, would find it ever harder to escape as the ratio of surface area to contained volume would rapidly decline. And, with all these collisions turning into such accumulated heat, the planet would soon have become a molten world (or very close to it).

Such a temperature would have turned that very common substance in our Solar System, namely ICE, via water into clouds of water vapour, and from outside the planet would look very like the condition of the present-day Venus, with voluminous clouds hiding the surface completely. And once this state was fairly constant, without any further large and numerous collisions, the major transformations to its surface could only be due to volcanic eruptions, as Hot-Spot convection currents in the molten mantle reached the surface with vast outpouring of extensive lava flows across its already solidifying surface, which would take the form of ever larger floating rafts of lighter-weight materials (for it would be packed with dissolved gasses, that increasingly were released and headed for the surface under tremendous pressures. And these ejections would build ever-larger islands of solidity all over the globe. 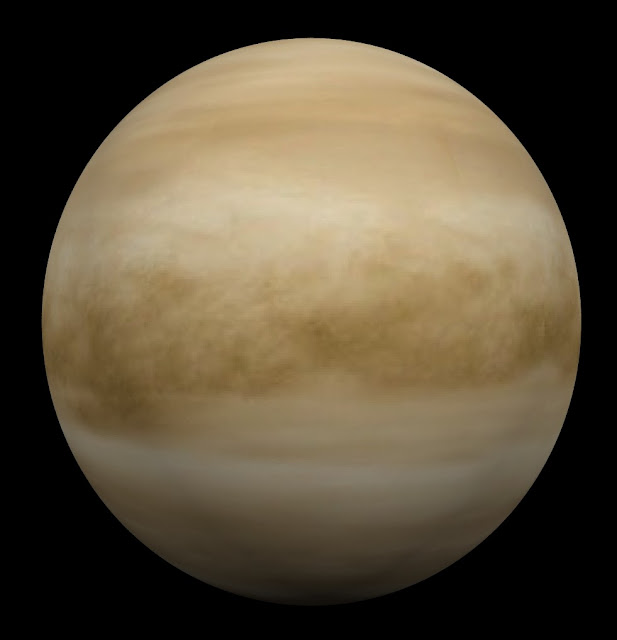 No other real changes, apart from the constant thickening of the crust, would occur just yet, and if the substance of that crust were investigated, it would consist of layer upon layer of purely igneous rocks. At that time none of the major sedimentary rocks would yet be present, and certainly none of those produced by living organisms.

But, ever since the constant bombardment finally ceased, such a hot surface would begin to lose heat at a high rate, and two important processes would start to occur.

First, the solid crust would thicken as new lave flows cooled and added to it.

And second, the abundant water vapour in the planet’s atmosphere would start to be precipitated as both rain and snow. But, on reaching the still, very hot ground, this would be rapidly turned back into vapour again, and air currents and consequent weather would begin to form systems within the atmosphere, but in so doing, movements of the atmosphere between areas of different temperature would be inevitable, so newly evaporated water vapour would again in cooler conditions turn in to rain again. So repeated precipitation cycles would constantly be extracting heat from the crust to return it to the atmosphere, from where it could escape to the empty space beyond. 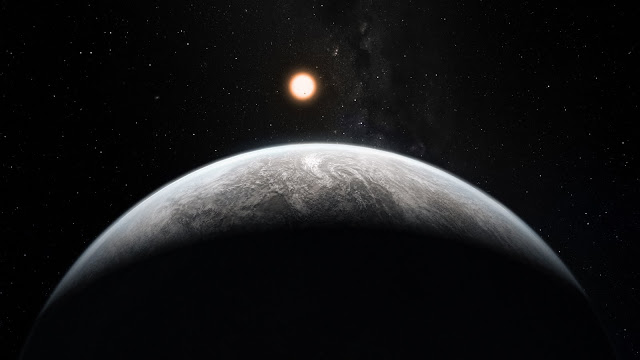 Finally, cooler regions that were not heated as much by that other factor – heat from the Sun, say closer to the poles of the planet, would receive rain and snow that was not immediately returned from whence it had come, and surface movement of this liquid water would form streams, rivers and finally ever-larger reservoirs of water, and finally collecting into seas and indeed oceans.

It is quite possible, with very little of this locked up as ice, that these bodies of water may well have finally covered the entire planet, as at this stage no mountains, in the usual sense, were present. It was basically a low relief surface with occasional volcanoes dotted about. 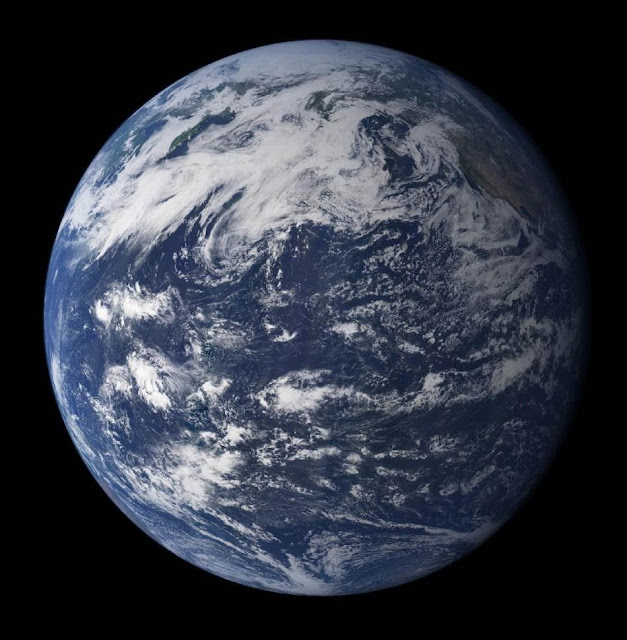 NOTE:  This means that at a certain point the only land would have to be adjacent to such volcanoes, so that the actual situation for Life to originate could be in the shallows close to such active sources of the most exotic ejaculations and constant heat.

And though the amount of land was either zero or very small, that would in no way affect the subterranean volcanic processes beneath the solid bottoms of the planet-wide oceans would still be just as active (both in mantle current Hot Spots, and in drowned volcanoes, so new volcanic islands would be emerging out of the ocean across the planet (just as Hawaii and the Galapagos Islands still do today).

Also, with continuing cooling, the water at the poles would spend some of the time as ice and new land made, at least at the surface of this new rock would grow at the expense of all-covering oceans, and the primaeval-raised areas of prior vulcanism would appear again a land.

In slightly warmer areas the rains could well fall again, and rivers would head downhill, carrying easier dislodged and picked up solids from the higher ground to both lower ground and finally to the sea, where they would be deposited as a descending series of gravels, sands and finally silts. Over many millennia these deposits would harden under increasingly-heavy overlayers into rock, and thus would therefore produce the first sedimentary rocks to add to the solid structures at the landward side, and to undersea surfaces of the planet.

But remember, all of this “land” would even then been as it is now, as a series of floating rafts upon a mantle of molten or near-molten matter. And, though in the end it would extend both above and beneath the waves into a continuous crust right around the whole planet, differences between dry land areas, and those constantly beneath the oceans, would gradually change and the “always-land” would break into tectonic plates driven by currents in the underlying mantle, and would slowly move, independently of one another, across the globe. Such movements would have several separate centres, and, therefore, the plates would move in various independent directions.

This new feature could not but lead to a series of eras on these floating blocks. For in time, there can be no doubt that these plates would finally collide, and when they did, wholly new phenomena began to occur. The colliding plates generally caused a crumpling of both plates, where the collision occurred, and for the first time mountains began to rise, which were not volcanoes.

Clearly, such increasingly high areas, would accelerate the run-off streams and rivers, and, due to erosion on the land, depositions upon the adjacent seabed would inevitably increase.

But these chains of high mountains also grew large enough to hinder the collisions, and the main thrusts would take one plate to be deflected downwards to travel under the other (Subduction). And this diving in towards the underlying mantle caused other, wholly new phenomena to begin to happen too. The diving place, often, but not always, from under the sea, would unavoidably bring large amounts of sea water with it that had seeped into the layer when under the sea, and the effect of this water, and the increasing temperature from the mantle, caused parts of this layer to melt, and increasingly released, previously dissolved gasses would cause great up ward pressures as they found various cracks and routes to the surface of the overlying land,

On reaching the surface a new kind of volcano occurred, with markedly different characters to the original Hot Spot types.

All along the tectonically-caused mountain chain, the volcanoes appeared and added greatly to the atmosphere of the planet, in addition to up upwelling of rock-making lava and exploded ash.

So, via these major collisions, the nature of the atmosphere of the planet was dramatically, and significantly changed, for, in the crucible of that volcanism, the ejected materials from both the mantle and the surface rocks, wholly new combinations were possible both between dissolved solids in the lying water, and in the ever more complex and reactive atmosphere: the planet, which had become a very different place with innumerably more substances, and their mutual reactions with one another.

And as the movements within the atmosphere became more vigorous, and effecting of ever-wider areas on the planet, extreme local conditions were more and more likely in a very diverse surface and atmosphere. In particular, the strength of the atmospheric storms could be so violent that vast numbers of electrons were torn from their parent atoms, leading to returns to normality via frequent and powerful bolts of lightning. So even electricity became common in atmospheric storms and an extra source of energy and components was added to an already complex mix.

But, still, as yet, free Oxygen was not yet a part of that heady mix, for as soon as it was Fire would be added to the many forces involved in the planets reactions.

Nevertheless, the atmosphere, at that stage, was a mix of reactive and dangerous compounds by any means of judgment.

Yet, it was in this precise environment that Life appeared upon this planet. It wasn’t anything like what we now consider to be Life, for almost none of the modern life forms would survive in that deadly mix.

Yet, they were certainly, and only for a short period in the life of the planet, certainly conducive to some initial, and very primitive lifeforms, which we know, in retrospect, would again completely transform the conditions and pave the way for very different forms that would follow. 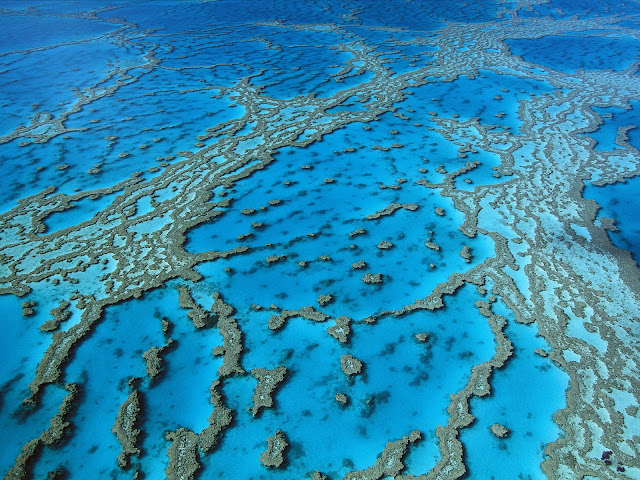 And we know it would, in yet another phase, wherein Life as we know it, or at least know about it from the fossil evidence, would finally begin to appear.

You may wonder why this small story was written?
It was to demonstrate the true essence of Science – NOT Equations, but Explanation!

For, without that we could never understand anything.