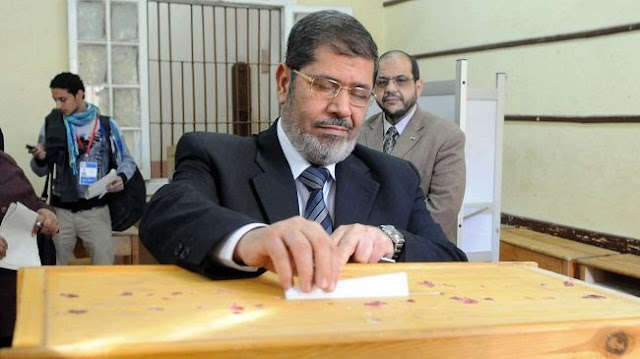 In the light of recent events in Egypt, where the country's first elected president, Mohamed Morsi, has been unseated from office in what many are calling a military coup, and others see as a continuation of the revolutionary process started in 2011 - it seems a vital time to re-evaluate exactly what we mean by Democracy, and what it's true role should be in a genuine Revolution.


Consider a political regime that you believe validates the repression of the majority of its people. What can be done to change the situation?

Well, it may be considered that the nature of how those in power originally achieved their positions, when it was initially transformed from the prior situation. They could have taken over by force of arms, say in a military coup, or via a popular uprising, or in more modern times, by a democratic vote. And, of course, if the establishment of the regime was either of the first two, and no democratic means of changing things were available, then those who are for change can only attempt to build a popular movement for the overthrow of the current regime. Yet, the actual physical removal of that ruling group by force is not considered to be correct, for whoever can marshal the mightiest force will win, and why should that be any better than what needs to be replaced?

No, it is usually considered to that some form of Democracy should be agitated for – a campaign to demand a democratic method of determining a government as the true representatives of the majority of the people.

A free and secret vote for candidates with no one being prevented from standing is usually considered vital. It has become the ideal of how a country should be governed, and regular elections will make it possible to vote out an unsatisfactory government, and vote in a better one.

But, does that ideal condition actually occur anywhere? And, is it ever enough to fulfill its original intentions?

The concept of Democracy was devised long ago, but not upon a countrywide scale at all!

It was certainly possible in a clan, a village or a City State perhaps. For then, the candidates might be well enough known for the electorate to make informed judgements. But, as the political units grew ever larger, and even became countries, those ideal arrangements and familiarity with everyone involved was certain to be lost.

The question became, “How can the ideal Democracy be scaled up to country-size, yet manage to maintain its necessary virtues?” And even further, “Was such a task even achievable?”

One model was suggested as the best way to maintain the qualities of Democracy. It was the hierarchical system. The lowest level of elections would still be small and local, where it would still be possible to know everyone involved, and choose with sufficient knowledge, the best person for the job. But, to deliver that the local unit would have to be small – a “Ward” covering a village, or clearly defined locality in a Town was one suggestion. But, what would be the role of the elected representative? Would he be like an elected Chief? That might cover purely local questions, but have zero effect beyond that constituency. Clearly, purely local leaders would have to represent that locality in some higher body, covering a large political unit – like a county or a City! But, then the questions on which the representative would have to vote, in the higher body, may never have been considered in the initial local election. And, clearly not everyone in the local Ward could be consulted and vote, for they might not know enough to make an informed choice.

The chosen representative must be trusted then, to make the best possible choices for those who had elected him or her. And clearly, the chosen candidate would have a crucial role in informing his constituents of the decisions pending in the higher body, and perhaps being mandated to vote in a certain way by his now better informed electorate.

So, an important modification to the local unit was its morphing into what became known as a council or soviet. And these bodies would have no restriction upon the size of the unit, but would have a vote in higher bodies proportional to their size.

Instead of a purely geographical determination, these soviets could cover a factory, or a department providing a particular service to a defined section of the community. A hospital would also be a very appropriate unit, which could deal with complex matters that the general public might be unaware of, AND, could even supply expert knowledge to a higher body, to inform its decisions in that area of expertise.

Clearly, above all this wide variety of local soviets would be a geographical Council, to which all local soviets of any size, could send their elected representatives.

While in a different direction, all hospitals (say) could send representatives to a higher body dedicated to that important set of objectives. As the layers in an ascending hierarchy got bigger and covering more responsibilities, they would have to elect people responsible to carry out the decisions of that body in particular areas – departments or “ministries” Clearly, with the particular specialist soviets, they could supply all who required it, with detailed information to both electorates and representatives who were in a position to make relevant decisions.

Clearly, what was meant to characterise these soviets and their upward and downward purposes, was meant to imbue the whole structure with relevant information. For without which appropriate decisions would be impossible.

But, even then, the current choices of representatives could not be guaranteed to do as the electorate wished. So, instant recall and a replacing election must be a right of the soviet over its representative in higher bodies, when the current incumbent was not doing what they considered to be necessary.

Indeed, this led to the callback of representative to a required discussion on particular issues, and perhaps even a mandating of the candidate, determining exactly how he should vote on a range of issues.

NOTE: But, that is not what happens in most so-called Democracies in the World today.

For not even the set of policies outlined before elections would be adhered to by an organisation (or Party) in power, and members of those organisations would actually be told how they should vote by their Parties, which even have policing members called Whips to ensure that they do as they are told.

And such a “mandating” is then top-down, and certainly nothing like the bottom-up mandates explained above.

But, we are forgetting why this MUST be how real democracy is to be built. Once the various electorates had representatives that they knew they could trust, the number and intensity of these processes would decline, yet when a representative broke the conditions of their election, they could be easily removed. The system would militate against corruption.

Though, for this to be the case, these organisations would have to be functioning within a Socialist Society! Somehow, a better system than the mere election of your choice of candidates would be needed.

Once elected, the candidates should be given the confidence of the electorate, and either given a detailed mandate to carry out an agreed programme, or could come to the council for discussions and decisions. Any widespread dissatisfaction with the actions of the office holder must allow (with sufficient numerical support) a recall for immediate replacement.

Now, as can be seen, many of these features do not currently transfer to higher bodies in any present hierarchical system. The detailed information and control of elected members and officers are not instituted, when the council represents a substantial electorate, and immediate recall would not be considered to be practicable.

The problem has to be, “Just how will higher bodies be elected, and how will the electorate both be fully informed and keep control of their elected representative?”

Currently, when the system moves to a national level, most of the excellent qualities of the small, local unit certainly have been lost.

Of course, there is also a much more important difficulty. Yet, other quite separate and crucial considerations that must be addressed cannot possibly be avoided.

What quite separate organisations of Wealth and Power exist simultaneously with the democratic, political system?

Who owns the land, the factories, the mass media and most of the Wealth?

And, could these “alternatives” intervene in the apparently fair political structure?

The answer is a resounding, “Yes!”.

Even in the first democratic City States, which included Athens (Greece) and Rome (Italy), the wealthy could buy their way to effective power. “Greasing the Wards” or “Bread & Circuses” allowed the rich to buy off enough of the electorate to gain office and hence political power too. And, on a larger scale, with immensely bigger organisations and concentrated wealth, they could do a similar thing with the democratically elected representatives of the people.

And, it cannot be denied that in one form or another that this is the norm, even in the most lauded democracies of today. Power still resides substantially with wealth! 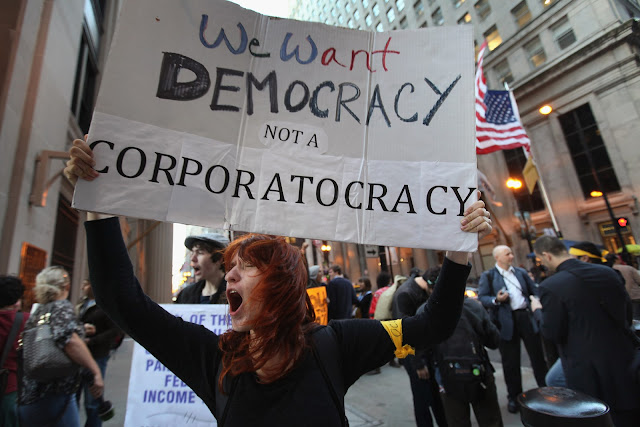 Now, at this point, the position of the generally accepted and indeed lauded leader must also be addressed. Giving everyone in a village an equal vote on all questions of policy cannot guarantee that the best decisions are always taken on behalf of the majority. It is more than likely that they will not know enough on all questions to make informed decisions. So, from the very earliest glimpses of a democratic system, the people soon learned to judge their friends and enemies within their village unit, and also to recognise greater knowledge and understanding in particular individuals. They gradually learned to differentiate between those who were out for themselves, and those who genuinely served their community. With more than a little luck, they could elect a leader or chief, who had all the necessary qualities to make the best decisions for the benefit of all. They are not rare people! You must have known many – from nurses to teachers, firemen to milkmen, and a thousand other occupations, wherein the greatest satisfaction comes from effectively serving the people in a way that makes things better for all. There are certainly those who ask for little more than to “do a great job”.

Now, choosing the best leader for a small group is relatively easy. And, if a mistake is made, the electorate simply informs that leader (via a Vote of No Confidence) and that they will choose someone else.

But, all these situations can be totally distorted by the above mentioned alternative power structures – usually based upon wealth and ownership.

The question arises, “Can you have Democracy in a society, which is drastically unequal in an economic and ownership sense?"

That surely has to be the key question to align with the ideal of political democracy.


For more on this subject, have a look at the latest issue of Shape Journal Marxism III.