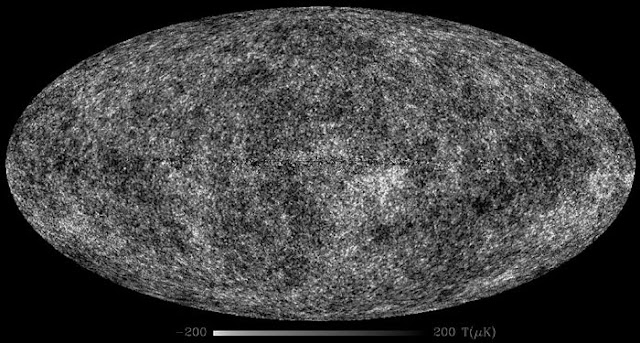 The amazing diversity of modern cosmological theories reveal the almost infinite variety possible when Reality is replaced by Ideality as the stage for all phenomena.

In New Scientist (2935), a short article by Lisa Grossman, entitled Cosmic Baby Snaps at Bubbly Birth, various theorists construct their contributions to “explain” unevenness in the current Cosmic Microwave Background (CMB), which they attempt to encapsulate into purely formal patterns alone. And, with that, we immediately leave the restricting confines of concrete Reality for the unlimited expanses of the purely Formal – that is the place where the “essences of everything”, that always deliver entirely alone today’s “explanations”, actually solely dwell – the World of Pure Forms alone that we call Ideality!

With every discovery, today’s scientists immediately put chalk-to-blackboard and find-a-form that will fit the newly obtained data.

It is the current method of explaining things by form alone, and it delivers Absolute Truths rather than old-fashioned, explanatory hypotheses, for in Ideality all forms are absolute, that is its strength (and, of course, also its weakness).

There is, of course, a seemingly physical language that is always used, with apparently physical forces, entities and their properties, but they are all secondary embellishments to the real nitty-gritty – the primary Forms involved, which actually drive Reality!

Let us relate just a few tasty morsels made available by such methods, as outlined in Lisa Grossman’s account! There is, before everything else, a Metaverse (prior to our and all other Universes), in which bubbles arise (like air-bubbles in a boiling liquid), each of which will then become a new Universe. BUT, wait for it, the densities of these universes (remember they are bubble-shaped) will be less than that of the producing Metaverse, so .the fabric of spacetime within them will inevitably be saddle-shaped.

Have you got that?

NO? Well, never mind, if you are a modern physicist, you will stop worrying as soon as a form-that-fits is put into your hands (or even one you have put together for yourself).

Oh, by the way, do not consider what will happen if the bubbles collide, for you would get absolutely nothing from such an event. The bubbles will all be expanding at the Speed of Light, so nothing from that boundary could possibly get back to anyone within that Universe, and, if it could, it would get “all mixed up” with the Big Bang data, and would be impossible to disentangle.

Aren’t you exalted by all these theories?