Stability within the Atom? 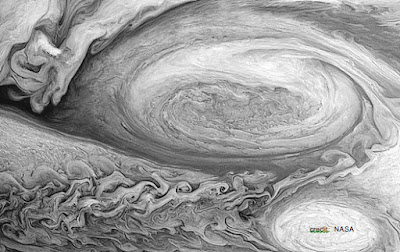 One important consideration when dealing with vortices within a substrate, must be to include the initial background state before their creation. For, such would most certainly affect those vortices, in addition to their clearly obvious causes by any moving material intruder.

And, what is most clearly shown in the turbulent atmospheres both of the Earth, and even of Jupiter, is that the vortices occurring in those circumstances are not simple consequences of the causing limited-swift-flows, or intrusions of some kind alone.

In the case of Earth’s atmospheric disturbances, one of the key causes-plus-results of the overall situation is the high-speed of the clearly determining Jet Stream, which itself has causes, governed by the heat supplied by the sun and the spin of the planet. Whereas on Jupiter, the initial causes, at least, seem to come from processes inside the planet, itself, along with a similar context of planetary spin.

Clearly, the spinning of both of these planetary bodies significantly affects the moveable, cloaking substrate of the atmosphere, and, once again, the results react back to become further affecting causes in themselves.

Now, though all these considerations are vital, particularly in the examples mentioned on the planetary scale, the key question arises, “What will be different when considering a Universe-wide, substrate, composed of micro components, inevitably also extending to within the Atom?” 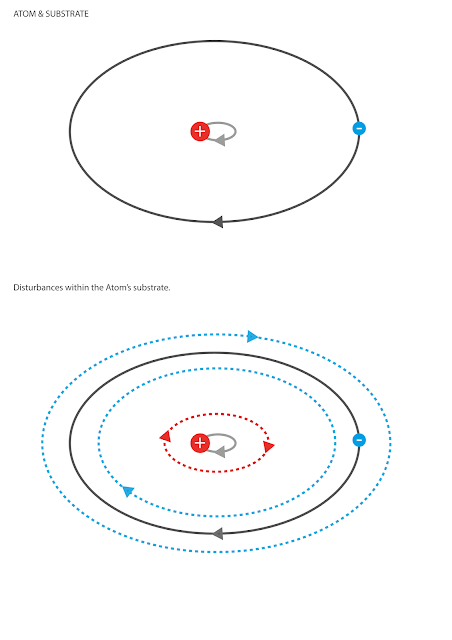 It is just possible that “down there”, we could profitably assume, as a simplifying, first approximation, that NO such external disturbances will be significant. We could locally assume a totally quiescent substrate only disturbed by the extremely close effects of internal components, and especially the orbiting electron (when considering, of course, a Hydrogen atom as the simplest possible case).

And, unlike the majority of disturbances in atmospheres, the situation within that enclosed space, must be affected, from the outset, by not only delivered effects, but also by the recursive effects of the vortices, caused by the orbiting electron acting back upon their original causes. For, with orbits the conditions are constantly being repeated time-after-time with each and every orbital return of the electron to previously affected parts of the substrate. 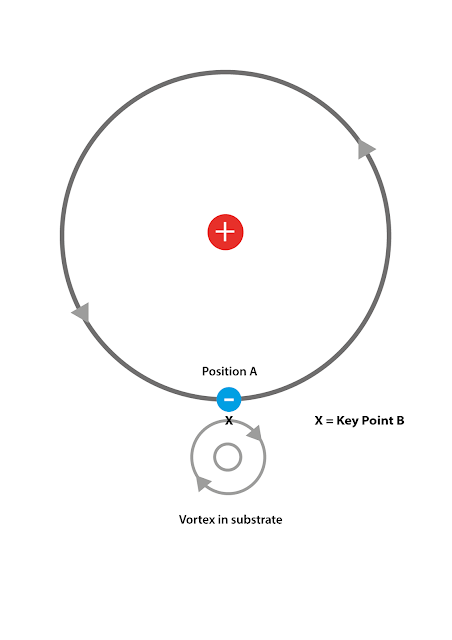 And, of course, these “same again” effects will either accumulate to dissociate the atom, or, much more likely, settle, somehow into a stable and persisting situation.

The situation is crucial, because, almost uniquely, this set up produces Quantised Orbits of the electron involved. And, this means that a fixed set of allowed orbits results, of different radii, and hence a consequent set of fixed energy levels. And, it is these, which allow the storing of electromagnetic energy therein, and, in turn, govern precisely both the frequencies and emitted energies of any released quanta.

The processes involved, in these energy transactions, are brought about by the demotion of a previously promoted orbit - from a higher orbit and Energy Level to a lower one.

Indeed, in comparison with Yves Couder’s experiments in a silicone oil substrate, with the establishment of a stable entity (termed The Walker) in that case, and the possibilities, which that also strongly suggests as also being relevant for the Atom – means that they both seem to indicate a sufficiently undisturbed environment for such stabilities to be established purely internally.

Indeed, the case of Couder’s Walker seems to suggest a very similar conjunction of resonances of various oscillations plus recursive feedback to be the crucial physical, formative causes for the remarkable occurrences in the atom too.

To get a better idea of what this means, let us take a more common case – the products of vortices by a narrow and fast moving stream entering and passing through a still pond. It seems to be a relatively simplified situation, but is nothing like as localised and indeed “locked-in” as is likely to be the case within the atom. First, the causing stream is unlikely to be close to behaving with the usually-idealised “streamline flow”. On the contrary, it is certain to carry with it disturbances, from its own forming history.

So, these are also brought into the still pool. 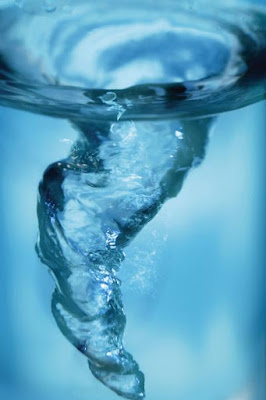 Also, there are no close constraints upon its subsequent passage, so vortices would be created, and then inevitably left behind, throughout its subsequent passage, to simply dissociate into almost random disturbances, while the continuing stream continues to generate more vortices elsewhere, thus contributing to its own ultimate demises a discernable, coherent stream.

But, within the Atom, on the contrary, the causing orbiting electron is a constantly returning enmity, repeatedly interacting with its own previously created vortices. And all of this is happening within the close confines of the atom, within a tiny, local area.

So, as with Couder’s Walker, stabilities could, and indeed must, be possible, if all the interactions are appropriately tuned to elicit the observed special effect of stable quantized orbits.

NOTE: Intended here is a suggestion, by this theoretical physicist, that the physical arrangement of the atom is such that an electron NOT in a stable (quantized) orbit will inevitably lose energy to the substrate, and so reduce that orbit until it matches an allowed level, at which it will become stable, and will stay the same until some external conditions cause it to change internally.

Now, clearly, these few inclusions are nowhere near a full explanation. The reason, for getting as far as we have in this problem, is the concrete evidence of Couder’s Walker, where with only a substrate and various oscillations a stable Walker was not only produced, but also maintained as long as the producing conditions persisted.

That alone was sufficient to begin to assume the possibility of a similar occurrence within the Atom.

But, just as with the Walker, where considerations and consequent explanations of the properties of the substrate and the bouncing drop, and of course, the absolutely essential matching of the involved vibrations, the situation in the atom will unavoidably also include many other considerations.

For, each element’s atom is different, with different quantized levels, and hence the influence of the many different nuclei (which also perform their own small orbits), will have to be included in a final and comprehensive Theory.

The current state of play in these theoretical considerations has now been taken beyond these brief notes in the SHAPE Special entitled The Atom published in SHAPE Journal on the Internet in July 2015. You can read that issue here. 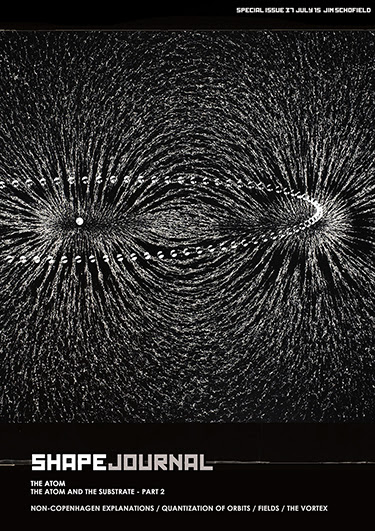