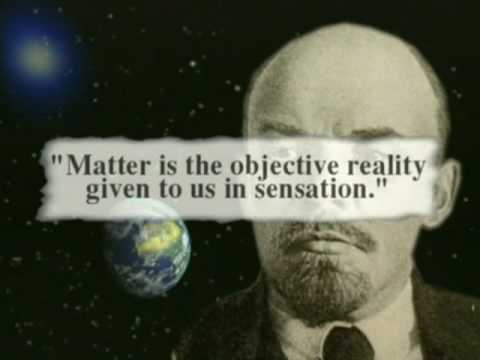 I have a perhaps surprising message to bring you from my occupation.

For, I came to my present political stance not only from my criticisms of Capitalism, or even from how it treats my profession, with regard to Funding or Training, but primarily from the inadequacies of the current stance in my field of study, Physics.

I am a professional physicist, and the current stance in that subject, trumpeted loud and long, in almost every University worldwide, and pursued vigorously at great expense with things like the Large Hadron Collider at CERN in Switzerland, all the way to the Space Policies of NASA in the USA, which are, without any doubt, the results of a major, doomed-to-failure diversion, due to a badly-flawed stance both philosophically and scientifically.

And, such damaged perspectives and policies are not limited solely to just my profession: the malaise is endemic throughout the whole range of investigative disciplines from Economics to Biology, and Sociology to Chemistry. The philosophical stance, across the board, has backed itself into a whole series of related crises, which cannot be transcended by any of the usually-employed means. Our Culture in such areas is heading for a collapse!

Now, it might be wondered why I am bringing this up here, to an audience with mainly political concerns. "What have the problems in academic research got to do with our general concerns, which actually affect absolutely everybody?", for such seems to be a perfectly justifiable response. Well, they are intrinsically connected. And, the debilitation of these disciplines is a serious problem for everybody, considering what has to be done.

We are in politics to transform Society in fundamental ways, and we will need intellectuals on our side, in the building of the World that we seek.

Now, it is not by chance that the investigative disciplines have been diverted into their present dead-ends. Ever since Hegel's revolution in Philosophy and Marx's conversion of those gains into Materialism, the natural allies of that switch just had to be these intellectuals.

But, though it happened in Economics with Marx's book on Capital, it didn't happen in the other disciplines, and especially in the Sciences. For, the fact that these disciplines were historically totally staffed with people from the privileged classes, made it easy, via the similarly-staffed Universities to maintain the Old Order, and keep any revolutionary developments out! There were occasional exceptions, of course, but they were few and far between, and their privileged audiences were generally not enamoured of what these "mavericks" had to say.

And, in my professional discipline, Physics, the unavoidable crises were the most devastating, and the "solutions" employed, the most debilitating. The prior amalgam of Pragmatism, Idealism and Materialism, which previously underpinned Science, was radically modified by dropping the most important of the three - Materialism!

At the Solvay Conference in 1927, physicists accepted the suggestion of Bohr and Heisenberg to drop Physical Explanations, and rely instead only upon Formal Equations, as the actual drivers of Reality. Clearly, all that remained was Pragmatism and Idealism: the former kept Technology going, but only idealist speculation was left for the development of Theory.

The tales about Multiple Dimensions and Strings of Pure Energy, along with inventions such as Wave/Particle Duality, all fitted up with purely abstract Forms from Mathematics are indeed accurate pillars of the now universally subscribed-to Copenhagen Interpretation of Quantum Theory. Explanations of the prior sort are gone, to be replaced with unfounded Speculations, based upon Formal Equations alone.

Now, "All very interesting!", I here you say, "But, how does it affect our primary concerns?" 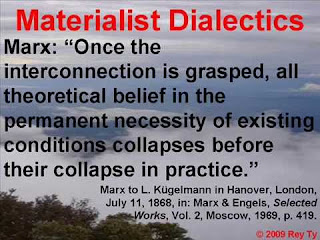 Well, it does, because the Philosophy that is the foundation of the serious critique of Capitalism, namely Marxism, has finally not only completed Marx's intention by recently delivering The Theory of Emergences, but, in addition has also torpedoed, once and for all, the Copenhagen Interpretation of Quantum Theory. The shackles limiting Physics have finally been cast off. And, not only Physics, but all the other disciplines can henceforward develop as real reflections of the Reality they study, for the cornerstone of all the sciences, Physics, has been liberated!

These, and many other, contributions have been being published, monthly, on the Internet in the SHAPE Journal over the last 8 years, amounting to over 700 papers in 100 Issues