An Intrinsic Redshift: Did Halton Arp have a point?

The Electric Universe brigade talk about a cosmic Redshift that isn’t caused by a Doppler Effect transforming the frequencies being observed. They assume instead that it is intrinsic to special modes of production within atoms at the birth of a new entity from out of the minor axis of a producing Galaxy (as Halton Arp has suggested, but as a purely Observational Astronomer was unable to explain). This infers that in the throes of such a birth, the state of the Universal Substrate within atoms is modified to give different “Quantized orbits” and hence affect the spectra modified by absorption and production processes by such atoms.

Now, presumably, the usual explanation of the radiation, emitted by atoms, assumes a particular Substrate context – say, in the more usual form of the Substrate contained within atoms, while that context must be temporarily modified at that birth, to only gradually be returned to normal over time! For then, distortion of that substrate in the external conditions, will definitely begin to affect the electron orbits back to the normal forms. This might be the only intrinsic modification of the emissions and absorptions in radiation, and hence will, in such extreme cases, effect the redshift too!

NOTE: As Redshifts are so common, it would seem that the electron orbits must all be at lower energies, so that transitions down to lower energy levels will also be lower – towards the red end of the spectrum.

But, if very special creation-conditions were involved in the production of such an Arp Entity, which dramatically affect the contained Universal Substrate within it, that would also affect the insides of atoms, whatever phase they were in, and hence deliver the effects we are trying to explain.

ASIDE: It cannot be pure chance that allows so many inexplicable phenomena to be so easily explained via the supposition of a Universal Substrate!

It could well be that normal phases are not extreme enough to make significant changes to the substrate. What must be involved will be conditions well beyond the usual ones - indeed some sort of Galactic Emergence! 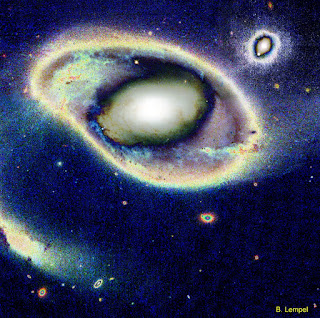 It could be when stable concentrations of the Substrate are well outside the normal – where, for example Matter is very highly concentrated, as in a Black Hole, or, alternatively, very sparsely concentrated, as at, or “beyond”, the Edge of the Universe! This being the case, we can assume that, within such an entity, the nature of the Substrate inside it can be significantly changed, so that the natural quantised orbits will occur at different radii, with different energy levels, due to the changes in the nature of the Substrate and its vortices associated with such orbits.

If we also go the opposite extreme and consider the effects around the Edges of such a Paved Universe, then, once more, the electron orbits within the atom will be changed but in the opposite direction, due to the sparse nature of the Substrate.

Now, if these extreme cases are to throw light upon such things as the redshift we will have to consider very carefully, what will be changed. Obviously, when general radiation is so “red-shifted” (as seems to be the case for distant sources), we must adjust our measurements, to include the fact that we will always be looking into the past, at times long ago, as well as into the far distance.

It seems that, in this pretty well universal case, we may well be talking about the possible evolution of the Universal Substrate. It is unlikely to have always been there, exactly as we conceive of it now!

For example, if some kind of Big Bang did happen, how does the establishment of the Universal Substrate fit into that vastly-changing scenario? And, even if some form of the Substrate preceded that Big Bang, it would unavoidably be successively modified both by that calamitous Event and its following consequences, with effects sweeping outwards from that “Point of Origin”.

In addition, we have to consider a natural “Temperature” of the Substrate over time.

The Substrate could always have contained a measure of Energy, either in the internal orbits of its component units, or in “whole unit” spins or oscillations or translational travel too! Hence the propagation of other energy would be promoting the internal orbits to levels above those necessary for their establishment, and to a general energy state of a whole region – its “Temperature”!

This being the case, we have to consider how propagation would be affected.

Remember, we have assumed that the propagation via the Substrate does not alter the nature of the so-called radiation: whatever it is, it will be propagated totally unchanged!

But first, how does our unit of Substrate manage that, and secondly, how may this be changed by circumstances?

NOTE: If the theories (of this researcher) concerning the role of the Universal Substrate, within an atom, and concerning quantized electrical orbits, are correct, the vortices caused within that substrate, by the orbiting of an electron, will be changed, if the Substrate differs from the classical form during extreme circumstances.

Clearly, if, for example, the density of the Substrate units were significantly changed (for some external reasons), the necessary matching of the orbit with the rotations of its caused vortices to, thereafter, cause quantized orbits would also change, and the orbits will be at different radii (and different energy levels) though still close to what they were in normal circumstances. We must determine how the behaviour of the vortices will be affected in a more densely packed Substrate within the atom.

Now, if this caused the transitions between energy levels to be slightly lower, the energy of the released radiation would be less, and the frequency would undergo a Redshift – one that is intrinsic to the “atom plus Substrate system” in those conditions. Also, a crucial factor (perhaps within, or very close to, a Black Hole) could involve a truly massive matter density, which might well distort the relationship between the orbiting electrons and the Substrate.

The more pressing problem is to explain redshift that is merely from distant and past objects, but is internal rather than due to Doppler Shift. How could the radiation be altered either in initial production within the atom, or in transit while being propagated by units of the substrate?

NOTICE: the very different demands upon Theory, between fitting purely formal (or even statistical) patterns to measured data, and the alternative of explaining that data via physical reasons in some form of concrete analogistic model. The former method is purely formal, includes no content or context information: it is merely a quantitative form-fitting to ideal mathematical forms, whereas the latter MUST involve both content and context and explain phenomena in terms of substances and their properties in particular defining conditions.

You can find more on Redshift, Aether and Substrate Theory in the latest Special Issue of SHAPE. 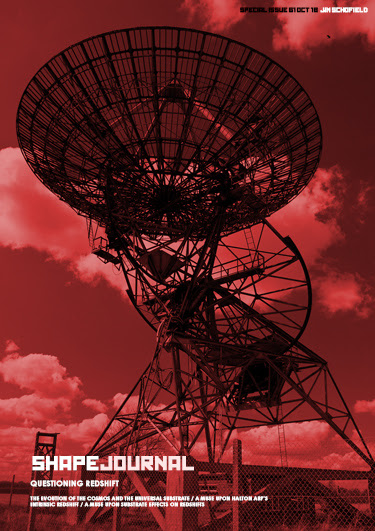