The Casimir Effect and Substrate Theory 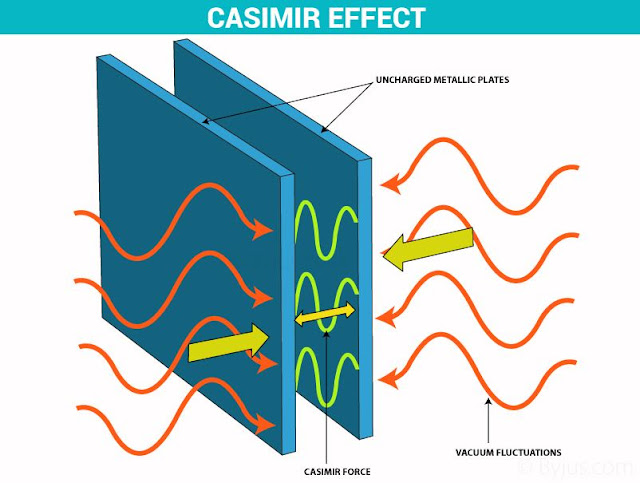 
"Any medium supporting oscillations has an analogue of the Casimir effect. For example, beads on a string[3][4] as well as plates submerged in noisy water[5] or gas[6] illustrate the Casimir force"

The quotation above is significant, even if it is just from Wikipedia! It allows us to consider a very different explanation to the consensus one usually adopted for the actual Casimir Effect, and it allows us to compare them.

The Casimir Effect (between two conducting plates in a vacuum) presents an excellent phenomenon for contrasting Copenhagen Interpretation of Quantum Theory with a new alternative account, suggesting the effects of an undetectable Universal Substrate composed of units consisting of mutually-orbiting pairs of Leptons (Substrate Theory) which replicates the idea in the quote in the exact circumstances of the actual Casimir Effect.

Clearly, that quote makes such a comparison absolutely necessary, for it immediately suggests an undetectable medium (though extremely fine-structured perhaps) as potentially delivering exactly what we observe, rather than QTís disembodied ìvaccuum fluctuationsî.

If composed of appropriate Leptons, these joint-units could be completely undetectable (cancelling-out all observable effects), while delivering the necessary properties of such a medium, and possibly also being capable of the propagation of electromagnetic energy, and fluctuations required to deliver the observed Casimir Force.

Such an invisible and connected medium has been fully theoreised by this researcher - termed a Paving and formed from Neutritrons (units composed of the mutual-orbiting of two Leptons - one Electron and one Positron) it presented significant suggestions that, in spite of the neutrality of such joint-units overall, that they could on very-close-approach, produce an affecting oscillating effect of alternating attractions and repulsions created-entirely due to cross-influences between the sub-units in different adjacent Neutritrons, which would loosely-link the joint-units together, to form that Paving, with the involved overall units constantly oscillating about equally spaced positions, and thus enabling a means of EM propagation, due to the demotion of energy from the orbit of one unit, and its promtion to the orbit within the next, immediately adjacent unit, thus delivering a bucket-brigade-transfer, and consequently propagating a quantum of energy, at a fixed speed - giving us C.


Now, if such an undetectable Substrate permeated the universe, especially as it is composed of oscillating units, it could also be a real alternative to the so-called Quantum Field of empty space. It would, for example, be capable not only of propagating energy, but also of holding and delivering it in appropriately conducive contexts. And the point about the Paving also shows how at tiny separations similar linkages with the orbiting-electrons and relatively static nuclei in the atoms of a sheets of conducting material, would also be possible in the same sort of way.

Now before the vast majority of Physics academics succumb to damaging heart attacks, may I inform them of the alternative explanation of Quantized Electron orbits in atoms?

As soon as even the remote possibility of an undetectable Universal Substrate was suggested, its necessary composition and consequent properties were required. Particularly as the sole composition by Neutritrons had already been able to remove every single one of the anomalies of the full set of Double Slit Experiments, without any recourse whatsoever to the Copenhagen Interpretaion of Quantum Theory.

And, an extension of the Theory of the Universal Substrate composed only of Neutritrons immediately revealed that the devised Paving was by no means a stable form. For fairly low applied energies would dissociate the Paving into individual units, and they could either thereafter act like a released random gas, or be driven by moving energetic interlopers into streams, or even into vortices, and though forms like the latter would usually be temporary - that would not be the case when caused by orbiting Electrons - for the orbits would cause the Electrons to constantly traverse the very-same-route, so the Vortices could be maintained by the returning electrons. And, remarkably, energy could also be passed back to the orbiting electrons by these vortices! For the overall energy available, only certain orbits would be possible: a physical explanation for quantization.

It soon became clear that if appropriate different extra Substrate Units were available, Electrical, Magnetic and even Gravitational fields could all be features of a heterogeneous Substrate. After all, it would explain why the supposed causes of the Fields were never diminished by the energetic actions of those Fields.

The required new units appeared to also be possible as mutually orbiting pairs of Leptons, but now with differently sized components, so that Magnetic Dipole Moments would be unavoidable. And the involved Units could both propagate and indeed subtend actual Fields, due to retained energy in the Unitsí internal orbits.

Even the required undetectability could be achieved by equal numbers of mirror-image joint units, which as a ìrandom gasî would be undetectable, but as statically formed areas, associated with their initiators, could easly subtend the appropriate Fields.

Read the rest of this paper on ResearchGate