The Profundity of Qualitative Changes

I have spent a considerable amount of time, over recent years, effectively condemning the Principle of Plurality outright, even though it was one of the most significant achievement of the Greek Intellectual Revolution of the 5th Century BC, and I necessarily did that not only to criticise its inherent weaknesses, but to also in addition simultaneously applaud its major contribution to Human Thought and Reasoning.

Both certainly had to be done! For all developments can never be purely absolute and positive: Reality does not deliver absolute Truth ever, but only aspects or parts of it, which unavoidably alight upon the easiest simplifications, which always have damagingly negative effects too. It is also an admission of the inadequacies of Thinking in Mankind, who were, after all, fairly recent originators of such wholly new processes in relation to addressing Reality.

Yet, the obvious alternative, the Principle of Holism, defined at about the same time, by The Buddha in India, certainly delivered no easy one-for-one superior replacement to Plurality. Indeed, it too has subsequently defeated the Buddha's disciples ever since, in attempting to deliver a coherent, useable and developable alternative, in spite of its undoubted wondrous moments of real Wisdom.

And, that turns out to be both its strength and its weakness: for no holistic system has yet ever been easily extracted from it, as a basis for Explaining the World causally - not least because it so frequently could clearly turn many situations into something quite different, or even their direct opposites.

Most important of all, in putting Qualitative Change at the heasrt of all Develoopment, it made the explanation of the consequent Emerging-New wholly impossible to derive directly from its producing circumstances.

The seeming impossibility of there being a useable System of Reasoning, tended to relegate its profound use to creative artists of various kinds, who, in individual Works-of-Art, could deliver profound moments of revelation only.

Yet, in spite of their Plurality, which considered all entities and processes as fixed, the Greeks' intellectual achievements remarkably included the invention of Mathematics, which as exclusively the study of Pure Forms alone, could indeed legitimately make that assumption, and when they illegitimately also extended that supposition to both Reasoning and Science, though generally undoutedly incorrect, it did indeed reflect the apparent constancy of most things - most of the time - the everywhere evidently temporary, yet long-lasting Stabilities of Reality, not only allowed Plurality to be a reasonable approximation, but it could also be guaranteed artificially by both greatly simplifying situations, and also holding things still.

It enabled Technology, but inhibited explanatory Science and developmental Reasoning. And, therefore, it was wholly incapable of explaing significant Developments both in an Evolving World, and in Creative Thinking.

It took all of 2,300 years before Hegel systematically tackled Dichotomous Pairs of contradictory concepts, with his attempt to include Qualitative Change into Formal Reasoning, which he termed Dialectics, though it was a member of his Young Hegelians, Karl Marx, who first extended it to the study of Reality with a vastly recast Dialectical Materialism, which he successfully applied to the current Capitalist Economic System in his major work Das Kapital. 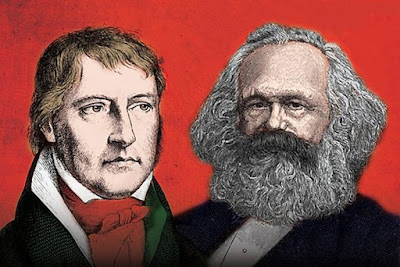 Now, embedded in that work implicitly were the required definitions and Methodology of the New Stance, but he was actually developing it, as he also attempted to use it, throughout that excellent achievement. But, it was never overtly spelled out formally, nor could it be, until Marx's untimely death prevented his doing precisely that.

And, it is only now that this necessary contribution has been achieved by Professor David Harvey in his series of lectures and YouTube videos. The whole series is remarkable: but his fourth Lecture upon Volume II of Das Kapital is magnificent!

But be prepared for contention!

Nothing is ever fixed forever - things which will be taken as fixed, will always cease to be so, as a consequence of natural development. But the Holist approach, in full flower, explains far more than any Pluralistic accounts ever could.

In this lecture he analyses what he terms as Fixed and Varying Capital, via Marx's Explanation of Capital as Value-in-Motion, a process totally impossible to address pluralistically, but only with Qualitative Changes throughout, with categories actually changing into their once totally-excluded opposites with such happening repeatedly, and therefore being incapable of either Description or Explanation by the still dominant Pluralist Stance in both Reasoning and Science.

Indeed, many of the changes occurring within Capitalism's trajectory, as it regularly morphs to climb out of its very regular Downturns, Recessions and even Slumps, by converting literally everything into monetary values, as the only measure, then inflating that value by competition on the Stock Exchange, by which they then corral it into their hands as the only ones who can afford it.

In the current period, late capitalism gets ever more desperate, and the cause of the last Recession in 2008 is simply repeated, once again, just as before, but with new ever more rightward directions, that they hope will mitigate the next inevitable crisis.